I am not sure when I first heard about the long slow run (though I suspect it was from my best friend who gave up the party lifestyle that we both were involved in and started running about a year before I followed suit), but as I was always clear that my focus was going to be on longer distances – I was nearly 30 by the time I started running, so sprinting was never likely to be on the cards! – the long slow run entered my vocabulary very early on. Indeed it seems as though there isn’t an endurance runner in the world who hasn’t heard of, and more importantly completed, many long slow runs in their build-up to their races.

However since I started my coach, Nick Anderson from RunningWithUs, has introduced me to the structured long run. What do I mean by that? Well it is like my friend Dan, a former contestant on Master Chef once said; you can serve a cheese plate with some bits of cheese on it, or you can create an event at the end of the meal with individual cheese dishes created by the chef. The long run can be simply time on the feet, run at an even pace, or it can be the pinnacle of your training, simulating racing effort and training the body for the rigours of racing, rather than teaching the body to plod along for hours on end.

I read a good discussion on this subject by the coaching legend Greg McMillan in Running Times (you can read the article here) and was reminded of it by talking to some friends at RunDemCrew who are training for the 2011 Chicago marathon. These runners have been given training plans and in some cases there are questions about the sessions they are doing and why they are in their training programme. Questions that I have attempted to answer. And one of the most common questions is around the long run and how it should be approached. 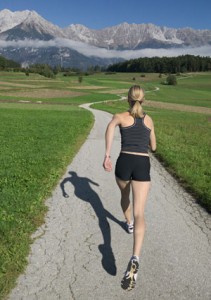 When I first started out on my running journey, I viewed the long run as simply a way to ensure that I would get round the race, whatever the distance happened to be. I believed that in training it was important to ‘do the distance’ so for my first few half marathons I ran at least 11 miles a few times in training (in fact for my second half marathon I remember running the full 13.1 miles in training to ensure I was ready!), for marathons I made sure I had run at least 22 miles more than twice and for my 50 mile ultras, I ran far enough in training that I knew that the last ‘bit’ would be manageable.

However as I have read and learned more about training and had more input from Nick, I have come to recognise that there should be more to the long run than simply bashing out miles and miles and miles. There are two main aspects to this, in my opinion, which are as follows;

1) the long run is one of the best opportunities we have to analyse how our training is going, second only to tune-up races. However that analysis is only really valuable if the run has some relevance to what we are going on to do. As serious runners, we are looking to run at the limit of our ability and exploit enhanced fitness to achieve better times. This suggests to me that a very long, very slow run is not going to provide much useful feedback. However, I would also suggest that it is not really sensible to undertake extended runs at race pace because…

2) … recovery is crucial. I run 9 times per week. There is no point me going out for a 20 mile run at race pace on a Sunday and then thinking that I will be running on Monday, doing a double day with a track session on Tuesday and a hill session on Thursday and so on. The long race pace run will take too much out of me.

So I now advocate the structured long run. A favourite of mine that Nick sets me is 50/50/50 which is 50 minutes easy, 50 minutes steady and 50 minutes at race pace (the structure here is key, so 30/30/30 is equally relevant if you are not used to such a strenuous session or you are training for a half marathon for example). Another is a progressive run, where the pace starts off gently and increases throughout the run up to race pace for the final few miles. Or another version I like is a run where the middle section is at race pace – say 120 minutes with the middle 60 at race pace.

Sessions like this are tough, but they also offer a chance to check progress without the brutality of an extended period at race pace. They also remind the body of what will be required ‘on the day’ and have the effect of getting different energy systems working. So I commend them to you – the long run might seem like the staple of the marathon runner’s training diet, but it need not be a boring cheese plate… you could really make it the crowning glory of your training week.