So here it is – my first video interview and I bagged a really good one. Mo Farah.

To give you some background, the interview was at an event organised by Nike and Sweatshop at the Trackside Cafe at St Mary’s University College in Twickenham, where Mo gave a talk to an invited group of athletes, primarily young athletes, and was later presented by the Nike team with a pair of one-off red and white track spikes in the Arsenal livery. 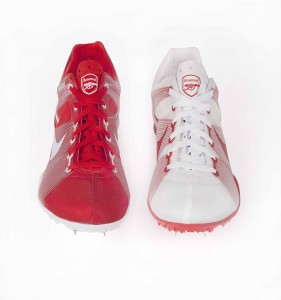 As you can tell from the start of the interview, I didn’t have much time with Mo, but it was really great to meet a hero of mine and I can confirm that he really is a lovely chap. I can also confirm that he is an incredibly hard-working individual and I hope that whilst he can do massive good for young people through his inspirational feats on the track, he also gets a chance to train effectively so that he gets the Olympic medal I and many others believe he deserves.

I hope you enjoy it.

The final question you must all be asking – did Mo get a PB. Well not quite. Before the editing job (excellently carried out by Sistak) the interview took 8min 20sec, which would be a massive PB for me but a light jog for Mo!