Injuries can be funny things. By this I mean they can sometimes seem to come from nowhere and be resistant to all the common treatments whilst at other times their arrival can be well announced and then they respond perfectly to icing or stretching or massage or whatever else is prescribed.

However with trickier injuries it is often a lack of clear solution that results in the injury worsening and become a real season-interrupter. My first brush with a persistent injury that resisted treatment was also my first experience of acupuncture and I learned a lot from both the injury and the treatment. 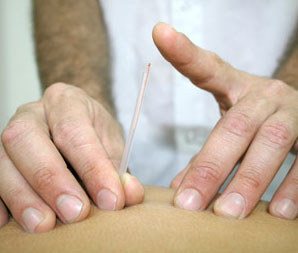 The injury was diagnosed as patella tendonitis or what many runners refer to as runner’s knee or jumper’s knee. Basically this is inflammation of the patella tendon which is found at the front of the knee connecting the knee cap (or patella) to the top of the shin bone. It is a classic over-use injury which often comes on when the runner increases milage and/or intensity and possibly doesn’t increase stretching to compensate.

In my case I had stubbornly kept running even though I was acutely aware of the pain in the front of my right knee. The pain continued to worsen until it was continuous and especially painful when I was running. And then I hit my knee with a pallet-lifter…

It was the Wednesday before the Milton Keynes half marathon and I was having a particularly difficult conversation with a client on the telephone. I had decided to take my phone and continue the conversation with the client while I took a walk from my office to the factory on the ground floor (I worked for a commercial printer at the time). I was mindlessly pushing and pulling a heavy industrial pallet trolley around whilst listening to the client when WHAM! the handle came down on my right knee. I was in agony (although I managed to avoid yelping and scaring the crap out of the client). By the time I got home that night my knee had swollen up and the tendon was incredibly sore. In desperation to run the race four days later I went to see Gavin Burt at Backs and Beyond who had dealt with my previous injuries. He decided that acupuncture was the best course of action.

Despite being rather nervous, I trust Gavin and so I tried to relax on the treatment table and see what acupuncture could do for me.

According to Gavin – in his typically straightforward manner – the idea behind acupuncture is this:

“If you have a splinter in your finger your brain sees it as a foreign object which may be infected and dirty, and certainly shouldn’t be under the skin so it mounts an immune response and an inflammatory response against it, involving white blood cells and inflammatory substances to disinfect the area and to get rid of the offending splinter. exactly the same process occurs when you have an acupuncture needle in your skin, except this time it’s the damaged Achilles tendon or muscle tear that the needle is inserted into that gets all the good healing stuff that the brain sends down there. so the acupuncture needle is used as an antenna to direct the brain’s attention to damaged tissue to help it heal….. simples, no?”

My experience was that after the initial very, very mild discomfort of the needles being deployed (acupuncture needles are typically made of stainless steel wire and are very thin) there was a sensation not unlike warm water rushing down my leg and around my knee. Gavin and I then chatted for a while – it might have been 20 minutes – before he removed the needles, which was totally painless, and I hopped off the treatment table.

The result was remarkable. My knee felt instantly better and I walked out of Gavin’s practice rooms with significantly less pain than I arrived with. Gavin suggested I ice my knee and rest for a couple of days, which I did. And on the day of the race I was completely pain free – no bruising from the pallet-lifter incident and no patella tendon pain.

The cynical amongst you may well suggest that the ice and rest had the effect of reducing the swelling and resolving the patella tendonitis. I guess there could be some truth in that.

However I am absolutely sure that the acupuncture had a significant effect – not least reducing the pain immediately after the treatment in the way it did. I must admit that I can’t rationalise how acupuncture can help people stop smoking or cure baldness, but I am a convert to the type of acupuncture that Gavin uses at Backs and Beyond. I have been back to Gavin with a few injuries and on the occasions where he has used acupuncture it has worked brilliantly so I would recommend that for those of you suffering from an injury that is not responding to the treatments you are using, find a practitioner that you trust, lay back and see what a bit of ancient Chinese medicine can do for you.