I read recently that it is more complicated buying running shoes than it is buying a car. I whole-heartedly agree (despite the fact that I gave up owning cars a few years ago and now rely on running, cycling and public transport to get around). One of my on-going personal missions is trying to find the perfect racing shoe.

What I am looking for

My requirements are fairly simple; low profile but not zero heel drop*, wide toe-box, snug heel, light-weight. I spent a few years racing in ASICS Tarthers which certainly did the job for me, but recently I have been looking around at other shoes. I have raced in the Brooks ST5 Racer which I like a lot, but which has quite a plush heel – more than I think I want for racing – and a medial post that I don’t think I need. I have also raced in the Saucony Mirage (a review on them is in the pipeline).

The shoes I love at the moment are the Mizuno Wave Ronin 3’s that I bought from Toby at Alton Sports. They tick all the boxes as far as I am concerned, although the toe-box is a little narrower than on the Tarthers, but not so much that it causes me a problem.

Mizuno describes the shoes as “Fast and dynamic with great flexibility and cushioning” and I tend to agree. There is a very lightweight and highly breathable upper made from a mesh material that is bonded to the G3 outsole which is described by Mizuno as being made from a lightweight material “which provides 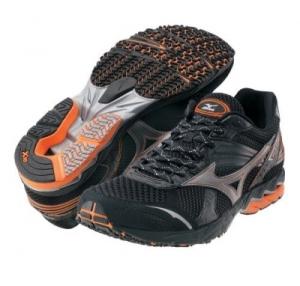 awesome grip without weighing you down”. Actually the only issue I have with the Wave Ronin 3 is the same that I had with 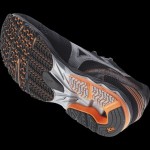 the Tarther; the durability of the outsole. Made up of a million little dots (actually it might not be a million, but I’m not going to count them), the outsole does tend to wear pretty quickly, especially at the front of the toe box. On the other hand, these are racing shoes and there has to be a compromise between weight and durability, so really my issue is not one that will stop me buying the Mizuno Wave Ronin 3 in future.

So in conclusion, I would say that the Mizuno Wave Ronin 3 is a great racing shoe. I have raced 3,000m races on the track in them, 5k park-runs and a half marathon. So far they have been really comfortable, especially for such a light shoe, weighing 210g according to the kitchen scales, which means they are in the same weight category as the Adidas Adizero Adios (209g) or the ASICS Gel DS Racer 8 (219g). They could just be the shoe that gives you the extra ‘pop’ you need for that ever-elusive PB.

* Heel drop is loosely defined as the difference in thickness between the front of the shoe – the midsole and the outsole – and the heel. In theory a drop of zero would mean that the when wearing the shoe the heel and the ball of the foot would be at the same level. In a shoe which is described as having a drop of 10mm, the heel sits 10mm higher than the ball of the foot. As for why we worry about these things, the normal answer is that with a small or zero heel drop it is easier to land on the mid-foot which is considered by many to be more efficient. For me, I prefer racing in a shoe with a minimal heel drop but I suffer more when I run in those types of shoes so for training I run in a shoe with a more cushioned heel and therefore a bigger differential.