As you would expect, I am increasingly paying attention to nutrition in an attempt to squeeze more running performance out of myself. Training and rest make up two sides of the performance triangle – the other side is nutrition. However as much as I do to improve my nutrition from day-to-day, there is always the matter of race-day nutrition to worry about and, like most runners, I turn to gel sachets to fuel myself whilst racing.

I have tried quite a few in my years of running. I have tried High5, Powerbar and Lucozade, often based on what is available at the race expo and which are pretty standard, sticky, gloopy offerings. I have also tried slightly unusual fuel sources including Honey Stingers, which are essentially little packets of honey and Torq gels, which come in a delicious albeit slightly odd Black Cherry Yoghurt flavour. 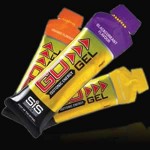 But my current gel of choice is the SIS Go Gel and I’ll tell you why. Mainly it is because I like the fact that the gels are isotonic which means that, except for on a really hot day or at the end of a marathon when I am always going to be dehydrated, the gels can be swallowed without liquid. I tend to find that I want to be able to take my gels when I plan to take them and not have to wait for a water station. There is however a trade-off, which is that the gels are quite big but there isn’t the same amount of carbohydrate (SIS claims that there is 22g of carbohydrates in each sachet) that there is available in the other, smaller gels.

I tend to approach the use of gels by taking one a few minutes before any race longer than 10 miles and then one gel every 45 minutes (so ideally one during a half marathon and three during a marathon) during the race. I know that I am lucky in that I have no problem getting gels down and keeping them down and whilst they are not the most palatable things in the world, I believe they help to top-up energy levels during a race and put off the ‘wall’ until… well after the race has finished, which is ideal!