It is commonly said that the opening of a book is the most crucial thing that the author will write. I have found that to be true; in every great book I have read the opening lines have been captivating and exciting. That is absolutely true of Christopher McDougall’s book Born to Run which I have now read twice and started

again last night. Why have I started it for the third time? Well, last night I met the hero of the book, Caballo Blanco, at an event set up by Saucony to promote their range of minimalist footwear. The opeining paragraphs of McDougall’s book describe him meeting Caballo Blanco for the first time like this;

“For days, I’d been searching Mexico’s Sierra Madre for the phantom known as Caballo Blanco – the White Horse. I’d finally arrived at the end of the trail, in the last place I expected to find him – not deep in the wilderness he was said to haunt, but in the dim lobby of an old hotel on the edge of a dusty desert town”

My meeting with this mysterious man was much less dramatic and lacked the poetry that Chris weaves into his tale. But it was nevertheless quite an experience.

The event that Saucony invited me to was one of the best product launches I have had the opportunity to attend. Everyone from Saucony was friendly, knowledgeable and clearly enthusiastic. The products that were on show make up the range that Saucony have developed to appeal to those runners looking for minimalist shoes; the Kinvara2 and Mirage, with 4mm heel drop, flexible yet cushioned soles, unstructured heel-counters and minimalist uppers. And the Hattori, a sock-like shoe with zero heel drop (i.e. no more material under the heel than under the ball of the foot). I’ll write about these in a future post. 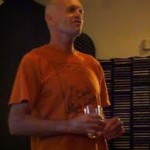 So after an introduction to the science behind the minimalist range with Spencer White, the director of the Saucony Human Performance & Innovation Lab in Boston, I found myself momentarily alone, looking at a display of the shoes I had just learned about. I glanced to my right and there was a tall, upright, lithe gentleman, dressed in Saucony gear but wearing a bright green pair of Hattoris, standing all alone, seemingly lost in thought and sipping a glass of water. “That can’t be…” I thought. But it was – the man who started out as Mike Hickman, became Micah True and ended up as Caballo Blanco running with the Raramuri Indians in the Copper Canyons of Mexico’s Sierra Madre. So I pulled myself up tall (Caballo Blanco is well over 6 feet tall) and strode over to introduce myself and then I said something stupid:

Caballo Blanco thought for a moment and said “I don’t know anything about a trend, man. I just do what I do” That pretty much sums up what I now know about his philosophy and his approach to running.

I won’t spoil the story for anyone who hasn’t read Chris McDougall’s book, but suffice to say that Caballo Blanco ended up in the Copper Canyons living with the Raramuri and adopting their approach to running. No training, no warm-up, no fancy gadgets or technical gear. Just go out and run. The Raramuri run for survival, for honour and for the sheer hell of racing for dozens or even hundreds of miles in footwear made from cut-up tyres and leather thongs. I got the impression that Caballo Blanco was less than impressed with the glass and steel building that we were meeting in, the busy PR people, the DJ spinning cool tunes for the assembled journalists and writers. He seemed out of place and I don’t doubt that what he really wanted was to go for a run, probably back home in the canyons that he loves. But he didn’t betray any of that; he was engaging and happy to answer questions and signed a copy of Born to Run for me (despite then telling me that he hasn’t had any contact from Chris McDougall for a very long time, which I thought was rather sad). Ultimately I doubt that Caballo Blanco worries about whether he has a message for someone like me, but he did have an effect. I left the event and rushed home along busy, concrete streets through London traffic thinking that it is very, very easy to forget that at the very core running is something totally natural for human beings and something that we should love doing, whether that is in minimalist shoes or not, in the Copper Canyons of Mexico or on the streets of a major city, for 2 miles or 200 miles. That brief meeting has reminded me to focus on the running and forget all the other stuff… a very important lesson delivered without pomp or pretence. Just get out there and run. Run Free!