In running terms minimalism is the new black. Everyone is talking about it and many, many runners are now trying out footwear with less and less… well, less everything really. From standard footwear that is being de-engineered to have fewer bells-and-whistles to the thinnest, lightest foot-coverings (I hesitate to call things like the Vibram FiveFinger a shoe) there is a noticeable trend towards less.

Earlier this week I had the opportunity to see the range of shoes up-close (although one of the range has been on my feet for quite a few months – more on that in a minute), meet Spencer White, the director of the Saucony Human Performance & Innovation Lab in Boston and the brains behind the development of the range, and meet an exponent of minimalist or indeed no, footwear – Caballo Blanco, the star of Chris McDougall’s book Born to Run (which you can read about here).

The range that Saucony have produced covers a gamut of requirements. At one end there is the Mirage, with the Kinvara sitting in the middle and the Hattori at what we will call the extreme end of the scale. 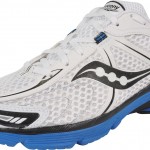 In my opinion the Mirage is a great shoe. This is the shoe that I have been running in for a few months now, since Toby at Alton Sports suggested I try a pair. I must admit that my first reactions on seeing them were ‘Wow! They’re white!’ and then a concern about the splayed sole that looked very wide. However from slipping them on for the first time, I loved them. They are the shoe that I most often reach for because there is some cushioning but that is combined with a lightness (only 252g) that my other, more regular high-mileage trainers don’t offer. The ‘supportive midfoot arc’ has not interfered at all with my running style and indeed until the presentation by Spencer at the Saucony event, I didn’t know it was even there, which is great for a neutral runner like me, but might suggest that the shoes are not ideal for someone used to a large degree of stability in their shoes. As far as the rest of the shoe is concerned, I found the upper to be really comfortable and breathable. And from a durability perspective, so far, with probably around 200 miles of use, they are in great shape (albeit a little less white!) 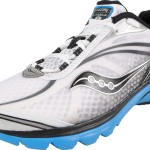 The Kinvara2 is a much newer shoe for me; I only got my hands on a pair earlier this week. However my first impression is that I am going to like the Kinvara2 even more than the Mirage. From a looks perspective, the shoe is very similar to the Mirage (still very, very white!) but slipping the shoe on, there is a noticeable difference in the feel. The Kinvara2 and the Mirage are supposed to have the same 4mm heel drop, but the Kinavara2 feels more low-profile. The upper is even more flexible than the Mirage and feels really well made with very few irritating stitched areas or rough bits to worry my delicate little feet. At the back of the shoe there really isn’t a heel counter worth the name, which to my mind is a good thing. The shoe is very light – only 218g – with a very light, cushioned sole incorporating diamond-shaped rubber pads to aid traction and durability. I’ll update this review after a few hundred miles in the Kinvara2, but from my early impressions I think this will be one of my favourite shoes for a wide range of sessions; from short easy runs, quick threshold and tempo sessions to races from the half marathon distance upwards. As my coach Nick Anderson* said, the new Saucony range allows runners to use a lightweight shoe most of the time and without the pressure to run at full tilt, as used to be the case with racing flats.

Then finally there is the Hattori… which I haven’t tried. OK, sorry for getting you to read this far on false pretences but really – the Hattori is a crazily minimalist shoe. It is like a sock welded onto a thin, flat piece of rubber, almost with the profile of a piece of car tyre. Wait a minute – isn’t that what the Raramuri wear when they are running! And as for weight, a pair tips the scales at 125g, which is about the same as a Weetabix. 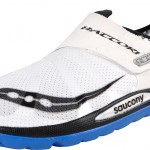 Spencer at Saucony was at pains to point out that while the Kinvara2 and Mirage have minimalist qualities they are intended for runners who want to run most of the time in a light-weight, low-profile shoe, the Hattori is a training tool. Intended as something that the runner learns to run in and limited to occasional use, over shorter distances and on forgiving surfaces (at least at first), the Hattori is not the shoe that Saucony envisage many runners will pull on for anything other than a few special occasions. For me, I think that the almost total lack of cushioning and the zero heel drop, means that I would have to spend quite a while getting used to the Hattori and that is time that I would rather dedicate to more running or strength and conditioning work. However the Hattori does finish off Saucony’s minimalist range nicely and I know from the reactions I have seen at the London marathon expo and other events where the Hattori has been on show, that there are a lot of people ready to make the leap to true minimalism.

My thoughts on Saucony’s minimalist range are pretty positive overall. I think they have created a small range of shoes that would allow someone to progress (or should that be regress – I don’t know) from ‘normal’ running shoes, to total minimalism step by step. However for me the real benefit in the range is that with the Kinvara2 and the Mirage there are now really light shoes that are a joy to run in and which afford a degree of comfort that racing flats don’t. I’m sure I’ll be enjoying these two for the foreseeable future.

*disclaimer: Nick’s company RunningWithUs provides training advice and consultation to Saucony. Personally I am not in any way linked to Saucony (indeed I rocked up to their event wearing Nike trainers and a Brooks t-shirt – that made me popular I can tell you!)