The Olympic Games are coming to London. In just over 300 days. And there is an increasing amount of opinion being spouted about whether London will deliver a great Games, deliver on the medal expectations and deliver on the legacy, the promise of which went some way to winning the opportunity to host the Games for this great city.

It is often said – and I believe it – that if you want to know the truth it needs to come from the horse’s mouth. Last night I was privileged and honoured to be a guest at a dinner hosted by Nike where Lord Sebastian Coe addressed 30 of us and talked about how far the Games have progressed and what is still to be done.

In logistic terms alone organizing the Games is a herculean task. The numbers are mind boggling, from the thousands that are already employed by the organizing committee and the thousands more that will be required in the coming months, to the 70,000 volunteers who will work at the Games to the massed ranks of police, medical and security staff that will be required. Then of course there will then be visitors in the millions. And not forgetting thousands of athletes from around the world. 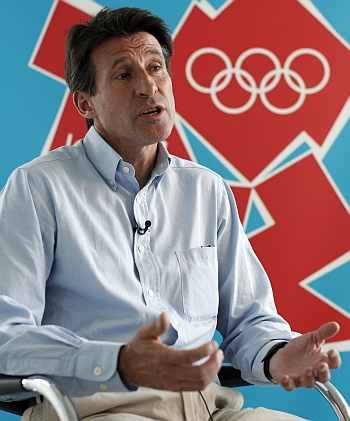 I often hear people say that sport is an analogy for life and to illustrate the mindset for winning the Games, Seb told the story of one of his earliest senior races over 800m at the European Championships Prague in 1978. In that race he set off at a suicidally fast pace, partly to try to neutralise the threat of his greatest rival, Steve Ovett. However, predictably, having run the first 400m in 49 seconds, physiology caught up with Coe in the last 200m and also predictably as he tied up, who was alongside him? Ovett. What neither of them realized however, was that there was a further threat – an East German athlete who blasted past the pair of them to take gold in the last 20 meters. Lord Coe said that he was on all fours, desperately trying to catch his breath when Ovett came over, put his hand on Coe’s shoulder and said ‘Who the f*** was that?’ With a wry grin Lord Coe told us last night that winning the Olympics was like that, with London as the unknown threat. Paris and Madrid were odds on favourites to win the Games, but with stealth and passion and great preparation, who snuck up on the outside and took it at the line? Yep, London. Lord Coe, undoubtedly a man of great vision, passion and leadership, talked frankly about the challenges that his organization faces, but in my mind there is no doubt that it will all come together and prove to be an exceptional event. And I got that from the horse’s mouth.

But the London Games in 2012 is about much more than the few weeks of competition. There is the issue of legacy. And for that Lord Coe dipped back into his own past to talk about the importance that companies like Nike play in encouraging and supporting young people and ensuring that sport, and athletics in particular, capture the imagination of youngsters and fuel the desire in them to compete and be the best they can be. Can we deliver on that? Well, thanks to Lord Coe and his team I have no doubt that we will have a great Games. But the legacy – well that is going to take a massive combined effort from all of us. I sincerely hope we succeed.