Inspiration from ‘The Perfect Distance’ by Pat Butcher

I have just finished reading Pat Butcher’s excellent book on the golden era of British middle distance running “The Perfect Distance. Ovett & Coe: the record breaking rivalry” (published by Phoenix and available here). I’ll write a specific review of the book soon, but in the mean time there was a theme running through the book that I found interesting because it spoke to me about my own current predicament. 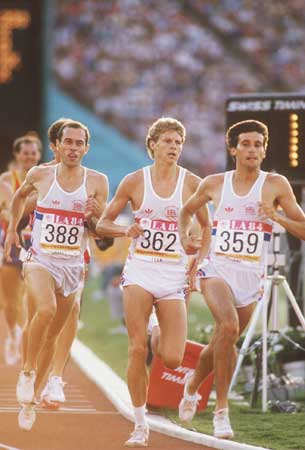 In the closing pages of the book, Butcher writes about the Los Angeles Olympic Games 1500m final in which Seb Coe, Steve Ovett and Steve Cram all ran and which provided British athletics fans with one of the most iconic images ever; the three of them in a line at the bell (see right). The result of that race is that Seb Coe became the first man ever to successfully defend a 1500m Olympic title. But perhaps more extraordinarily, he did it despite battling with injury and illness almost his entire career. Butcher tells us that;

After almost three years of illness, half an elite athlete’s lifetime. He’d [Coe] done it [defended his Olympic 1500m title]. Against all the odds. He had done it.

And that is extraordinary to me in one very clear sense. How many people would have persevered through the sorts of trials and tribulations that Coe had endured? Stress fractures, crippling toxoplasmosis, sciatica and a host of other injuries? I have had a very fortunate ‘running career’ of 5 years during which time I have managed to avoid any serious illness or injury (save for a broken wrist that was the result of being knocked off my bike) whilst friends and contemporaries have suffered all sorts of set-backs. But the remarkable thing is that Coe kept coming back. He took his time, got the treatment and worked his way back to top form.

The same is true in so many walks of life – it is all too easy to see a finished product in any discipline and not realise what had been going on in the background for months, years or even decades. In terms of my interest in running, it is easy to think that sporting greats arrive on the scene as the finished product. But that is never the case. I think that arguably the greatest distance runner the world has ever seen is Haile Gebrselassie and he himself acknowledges that it was decades of running, starting with 10km a day to school and back, that set him up for his achievements in later life. One story that I love, which may or may not be true, is that of Picasso sketching a woman in a cafe;

A woman was strolling along a street in Paris when she spotted Pablo Picasso sketching at a sidewalk cafe. The woman asked Picasso if he might sketch her, and charge her accordingly. Picasso graciously obliged and in just minutes, there she was: an original Picasso.

“And what do I owe you?” she asked.
“Five Thousand Francs,” Picasso answered.
“But it only took you three minutes,” she politely reminded him.
“No,” Picasso said. “It took me all my life.”

The point of this story is obvious, but one that it is easy to forget – achieving greatness, whether that is objective greatness or simply being the best we can be, takes years or decades or even a lifetime of dedication. So how does that relate to my predicament?

For the last few months I have been struggling to train at the level that I think I need to, to achieve what I want to, especially in terms of achieving new personal bests. Now I am not suggesting for one minute that there is anything to compare between me and Sebastian Coe, but I do think there is much to be learned from his example – he rolled with the punches and dealt with the set-backs. And in my mind that is one of the things that makes an athlete great. Like all injured runners I need to stop feeling sorry for myself, find out what I need to do to get back to my best form and get there step-by-step . Thanks for the inspiration, Lord Coe!