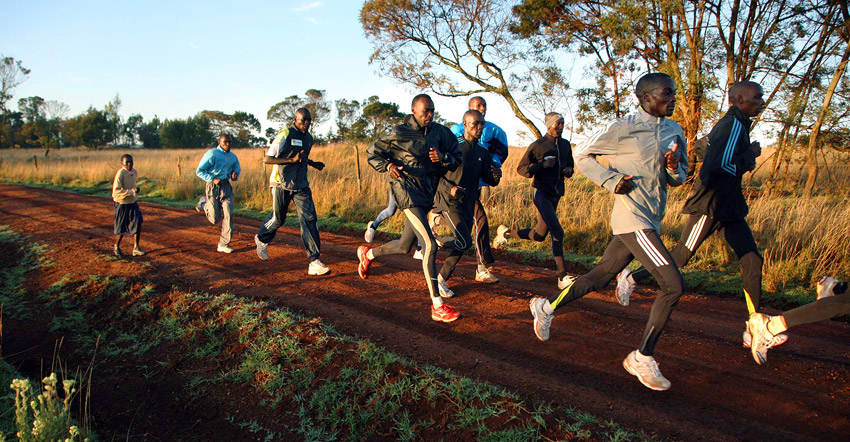 Don’t tell my wife, but I harbour a dream of going to Kenya for a fortnight to go running. I realise that financial considerations make the chances that I will rather remote. But I will keep that dream in my heart. It might surprise you to know that the reason I want to go to Kenya is not for the benefits of training at altitude. I have previously spent many weeks at a time at altitude in the Alps, Pyrenees and the Andes in Peru. But a fortnight at two and half thousand metres does not a champion marathoner make. No, the reason I want to go to Kenya, is to experience the early morning group runs.

Personally I really love the social aspect of training, whether chatting whilst on a long slow run or encouraging others on the track whilst completing a hard session. In Kenya, the runners seem to make a virtue of running in a group, as described by Toby Tanser in his book “More Fire, How to Run the Kenyan Way”:

The chilly pitch-black darkness that spreads around the high-altitude training center like a watchman’s cloak will soon disappear; the sun rises with the speed of a jugglers hand on the equator. There are no street lights in Kamariny, and there is little noise to be heard save one noisy rooster cleaning his throat. Although it is barely 6:00am, a group of well-trained athletes, with hardly an ounce of fat apiece, silently mill around the camp…

No words are spoken, as some athletes are still sleeping in the camp. There is a group of visiting European runners, and they will wait until after breakfast for their run. Another group of runners who usually leave at 7:00am will still be sleeping now. The Kenyans, however, typically all run together on non-specific training days. The leave in a group and then the tempo and distance are worked out literally on the run.

And during his time in east Africa, Adharanand Finn ‘enjoyed’ many group runs, often with elite level athletes. In one of his first despatches in the Guardian he writes about the first time he joined a group on an early morning run in Iten, Kenya

runners suddenly start appearing from everywhere, materialising out of the darkness. Within a few minutes there are around 60 crack Kenyan athletes standing around. Some of them are talking quietly and stretching. They are mostly men, their long, skinny legs wrapped in tights, some wearing woolly hats. I suddenly feel out of my depth. What am I doing?

Without any announcement, they all start running, heading off down the dirt track. The pace is quick without being terrifying, so I tuck myself into the middle of the group. Up ahead the full moon lights the way, while behind us the dawn is creeping across the sky, making it easier to see. The last few stars go out as we hurtle along out of the town and into the African countryside.

You can read more here.

Running groups around the world

All over the world, groups of fantastic runners congregate for training. Nike and the US Olympic team utilise Alberto Salazar’s Oregon Project where Mo Farah has recently stated that he and Galen Rupp do nearly all of their training together.  Liz Yelling has written and spoken about training with a group of top runners in Bournemouth, and I could cite instances all over the world where runners train together to push each others performances to better and higher levels.

As well as knowing the benefits of training in a group anecdotally, I want to know if there is any actual evidence that training in a group is better. Almost every book, article or blog I have read has stated that the majority of the greatest elite distance runners in the world do most if not all of their training in groups.

From a coaching perspective, Nick Anderson, who coaches runners of all levels of ability with RunningWithUs [www.runningwithus.com] says:

The group brings competition, support and fun when athletes are working hard. At the highest level of running, competition as found in group sessions is crucial.

Similarly, in last weeks Marathon Talk podcast, the new superstar of British marathon running, Scott Overall, talked about the importance of training with a partner. Of course at his speed it is difficult to find enough people fast enough to keep up with him to make up a ‘group’!

Given the ubiquity of training in groups and the perceived benefit, I wondered if there was any scientific evidence to accompany everything I intuitively know? Well, Stuart Holliday, from The Focused Mind, gave me valuable information for this piece, starting with some background on Norman Triplett, the psychologist who in 1892 researched what eventually became known as Social Facilitation (you can read more about that here).

I personally think that in the case of running, it would be extremely rare for a runner to find their competition performance deteriorating due to the presence of others – after all how many marathoners talk about the immense boost they receive from crowds by the sides of the roads in big city marathons? However, if a new runner does join an experienced group for a track session, it can be extremely daunting.

Stuart goes on to say that rather than worrying about how one performs in relation to others, the other runners in the group should be used as a gauge. Stuart advises runners to not feel too downhearted if on your first few sessions you feel like you’ve been left behind. Unless you use a watch, what you won’t have noticed is that your lap times get quicker week by week.

Holliday offered further advice when he told me “Stick with the weekly track sessions with others. You will find yourself getting faster and be able to sustain consistent speed for longer periods. But make sure you compare your performance against your previous efforts and not against others! As I’ve found training with some Kenyan and leading British runners, it can be a fruitless task training with certain individuals! Equally, on those long training runs, having a running buddy or two can keep the spirits up as the legs ache after 2 hours.”

Personally I’ve benefitted enormously by running with others on my personal running journey. I’ve been encouraged and supported and can feel and see the improvement in the training cycles leading up to big races, such as the London marathon this year or 2010’s Florence marathon. And a final word from Stuart Holliday really emphasises the value of running in a group: “Don’t forget its a two way street though. Even the fastest runners appreciate a word of encouragement and such help in training can mean the difference between getting or missing a PB in the race situation.”

I believe (and now have the evidence of well established research) that running in a group is really beneficial. I feel a definite performance boost from cruising along in a group on a long run or blasting round the track in a speed session with others. Running in a group provides an incentive and encouragement that plodding along on my own will never do. If you don’t believe me, when I’m back from Rift Valley I’ll tell you all about the benefits on a group run! Just don’t tell my wife…