On Thursday last week I was invited to the official opening of the Nike store in Westfield Stratford, on the Olympic park being built for the Games in 2012. The added draw was that Paula Radcliffe would be there, talking about running and giving tips and discussing her training and of course, discussing her meeting with IAAF president Lamine Diack to discuss the recent ruling that means that as of January 2012 Paula’s world record of 2:15:35 will be down-graded to a ‘worlds best’ from it’s current world record, because the race was a mixed race.

On arriving at the new store, everyone there was given a ‘History Stands’ t-shirt and we were able to nose around the very impressive new retail space, while a DJ played. But it was clear to me, that everyone was there to hear Paula being interviewed by Charlie Webster. And we didn’t have to wait long.

As I would expect, the message that Paula delivered from the IAAF was that they are sympathetic to the points she made and that they would look into the issue. Bodies like the IAAF rarely reverse decisions quickly or publicly, but my thoughts about this ruling are pretty clear; 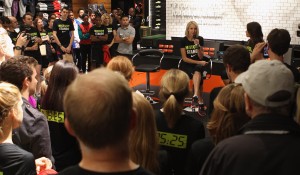 Paula Radcliffe on running in a group

I think that like many of the people at the event, I was a bit disappointed that there wasn’t more positive news from the meeting with the IAAF, but when you have a super-star like Paula Radcliffe on stage being interviewed by a knowledgeable interviewer and runner like Charlie Webster, who was sporting trainers with ‘Break 3:30’ embroidered on the tongues, to remind her of her next target, there is always going to be some good stuff to take away.

Charlie asked Paula for any advice that she had for marathon runners who are starting out on training for the marathon and I was really pleased that Paula raised the subject of finding a training group, whether that is an athletics club or a group of friends. I have written about the value of running in a group which you can read about here and Radcliffe also talked about the importance of running in a group as the nights draw in from a safety point of view. Indeed after the talking was done there was an opportunity for the assembled crowd to go for a NikeTownRunners blast lead by a team from the store, which happens every Monday and Thursday and includes women-only groups, which I think is likely to be quite popular.

Paula’s focus on the Olympic Games 2012

Moreover I was delighted that Paula talked so positively about her experience in Berlin and the surgery that she had just afterwards. It was really great to see the fire in Paula’s eyes when she talked about the decision she had to make mid-race to back-off from challenging the eventual winner Florence Kiplagat who finished in 2:19:44. Paula has her eyes on the gold medal in London and I am delighted to see that she is prepared to do whatever it takes to make sure she is on the start line in the best shape possible. Can you imagine if she runs a world record that day… what would the IAAF say to that?