First of all a confession – I haven’t ever really run in Adidas footwear before (I did have a pair when I very first started running, but I can’t really remember them and they were consigned to the bin fairly quickly after I discovered I had bought a size too small for me). The reason for this is rather ridiculous, but is something that I hope many runners will understand; I had a bad retail experience and then never went back to the brand I was annoyed by. 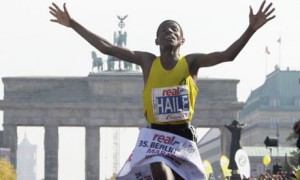 After I started running I always went to a specialist running shop for my shoes, but after a few years, I started to think that I knew what felt good on my feet. So I went to a huge Adidas shop on Oxford Street, in London’s West End, with the intention of trying on, and buying, some Adidas racing flats. After all these were the shoes that Haile Gebrselassie had worn when he and I ran the Berlin marathon earlier in 2008; he set the then world record of 2:03:59 and I ran a PB in 2:51:52.

The problem is that I am not good at shopping. I don’t like hanging around and I don’t like what I perceive to be bad service. So after waiting for a preposterously long time to be served and for the shoes I wanted to try to arrive, the sales assistant dropped the shoes on the floor at my feet and started serving another customer… and I left and walked straight into the arms of ASICS, where I remained until earlier this year.

But now I might relent and finally succumb to the lure of the three stripes. Why? Well I have stopped wearing the ASICS that I was so faithful to and started trying different brands. And the new Adidas range looks pretty interesting.

Being shown around the Adidas shoes today by Kirstyn from the KTB PR agency, I finally grasped the different ranges that Adidas have and who they are aimed at. There is the Response range, aimed at the beginner and designed to provide a choice of entry level shoes. Then there is the Supernova range, offering slightly lighter and rather sleeker-looking shoes with lower profiles and an overall racier feel, aimed at the ‘improver’. These shoes include Adidas’ torsion system in the sole along with a larger area of Formotion cushioning but without any extra weight. Next up is the adiStar range, which is considered to be for the serious runner with further technical additions and even lighter weight. And finally there is the adiZero range which contains Adidas’ racing flats, as worn by Gebrselassie and, perhaps more significantly, Patrick Makau in this years Berlin marathon, when he set a new world record for the marathon: 2:03:38.

There are two shoes in the new adiZero range that I am really keen to try; the adiZero Adios and the Feather.

The Adios is the shoe that I think could become one of my favourites. Handling the shoe, it is undoubtedly light and feels well balanced and with just the right amount of flex. The innovation in this shoe that I think is really interesting is the link-up between Adidas and the tyre manufacturer Continental, who have supplied rubber that has been incorporated in key areas of the sole to aid grip. The areas of rubber are quite small to ensure the shoe remains extremely light, but the rubber is exactly where my racing flats always wear the fastest – mainly at the front of the toe-box – and if the Continental rubber adds traction (the KTB PR team informed me that some boffins somewhere have estimated that the rubber saves 1mm of ‘slip’ per 1 meter, which over a marathon adds up I guess!) and longevity, then I think Adidas could be on to a winner.

The other interesting shoe in the range, that caught my eye, is the Feather (see right). As the name would suggest this is a very light shoe indeed and has something that I haven’t seen in a long-distance shoe before. The ‘sprint frame’ that the shoe is built around is a full-length rigid plastic base – similar to the sole of a track spike – that the upper is bonded on to (thereby saving stitching which might make the shoe  more attractive to those who prefer running without socks) and onto which is stuck the adiPRENE cushioning material. I must admit that I am not convinced that a shoe that has such rigidity in the sole is going to be a good idea, but I hope I’ll get a chance to try them out and report back.

The other things that caught my eye were the adiZero clothing range and the official London marathon apparel.

As I have said before, I really am a big fan of the Adidas adiZero clothing range. The latest offerings feel really great; super-light, well made with body-mapping technologhy which means that different materials are used in key areas to aid moisture management or improve ventilation. Oh and they are orange (and I mean really orange – see left!) I know that personally I am highly likely to end up adding to my already considerable collection of running wear with some items from this range and as soon as I do, I will post some reviews.

tems I had a look at were the Supernova pieces that will make up the official London marathon range (at the time of writing this they are not available, but you can have a look by following the link). Again, orange is the colour of choice – see right – and I think that the collection looks good and really is high quality, so if you are keen to show-off that you have run the London, then this kit is the way to do it and is also pretty good technically.

So I would say that from what I have seen, Adidas have some pretty exciting products coming out in the next few months. I hope that I will have a chance to try at least a few out and I will put something in the review section. In the mean time if anyone reading this wants to add a review of some kit they are currently using please let me know (and that goes for any brand, not just Adidas) whilst I am going to pull on my new trusted Mizunos and head out for a little run.