As I have admitted before I have never really run in Adidas shoes. In the case of Adidas it was a big sulk caused by a bad retail experience, the impression that Adidas shoes are too narrow for my rather wide feet and the fact that with so many other brands to try, I never had the need to buy Adidas.

However, after being invited to the launch of the new Adidas range for 2012 and then being sent a pair of the new AdiZero Adios, I am converted. In fact I would go so far as to say, I am really impressed with the shoes.

These are the shoes worn by Patrick Makau in Berlin a couple of weeks ago when he broke the world record and I can certainly see why they would be his choice for the marathon. They are light and flexible. The upper is really breathable and whilst the fit is snug (bear in mind I do have wide feet) they seem to hug my foot rather than restricting it.

I have worn the Adios for the last week on three runs and they performed superbly on each.

On Wednesday night I had a progressive 10 mile run on the canal towpath in the gathering gloom. This was my first run in the Adios and I was delighted by how light they felt despite providing a good deal of cushioning on a relatively long run on the hard concrete towpath. The grip was excellent despite some dampness on the ground and I really felt like I was floating along in the Adios. I was also really happy that the upper of the shoe is very breathable and as I pushed the pace I could feel the cool evening air through the top of the shoe which was great for cooling my feet.

The second outing for the Adios was a speed endurance session on Saturday. This involved extended threshold periods and multiple short fast hill reps in between. Again the Adios were perfect, with just the right balance of lightness and cushioning to ensure that I finished the session with my feet feeling great.

And then I took the Adios out for a long run today. I always try to do at least part of my long run off-road if I can but today that wasn’t possible. However despite the lightness and low profile, the Adios were great even after 16 miles and I didn’t miss my usual, much more cushioned shoes in which I do most of my easy running.

The Adidas AdiZero Adios have quite a few features that I really like;

My conclusion is simply this; for many of us the search for the perfect shoe is a long and arduous one, especially the search for the perfect race-day shoe. I have known for almost as long as I have been running that many of the greatest runners in the world wear Adidas shoes and yet I stubbornly refused to give them a try for a rather petty reason. That was a mistake. I really like the Adidas AdiZero Adios. It is a great race-day shoe and one that will have a permanent place in my shoe rack. It is a shoe that for me combines all the things that I am looking for – lightness, breathability, flexibility and cushioning – with the fewest possible compromises. And it is very, very orange (which I like). I’m glad I have finally got over my jilted-lover syndrome and embraced the Adios – I think we’ll have a long life together.

The new Adidas AdiZero Adios will be available in the UK from January 2012.

Postscript, here are some official notes from Adidas about the technology built into the AdiZero Adios: 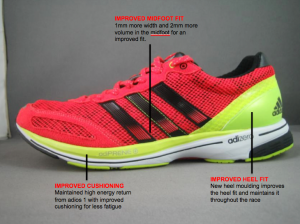 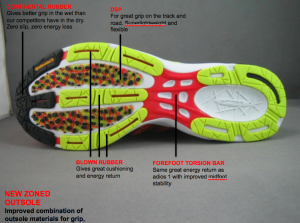