A few months ago, whilst leafing through Athletics Weekly, I came across an advert for a seminar that was going to be presented by a chap called Rasmus Ankersen, known as the High Performance Anthropologist. The talk was going to centre around a project that Rasmus had undertaken, called the Goldmine Effect, which lead him around the world visiting locations, often remote and usually very unassuming, from which had emerged world beating athletes. And not just one from each location, but dozens if not hundreds from each place. This examination of the forces that create these pockets of excellence dovetailed perfectly with some of the books I had been reading; Bounce by Matthew Syed, Drive by Daniel Pink, Outliers by Malcolm Gladwell and Gold Rush by Michael Johnson.

So I bought a ticket and waited for the date to come around. But I also tweeted Ankersen (@rasmusankersen) asking whether he would give me 15 minutes before or after the seminar so I could conduct an interview. Well if you don’t ask you don’t get, and I was delighted when Rasmus replied to say that he would have time for me.

Here is my interview with Rasmus Ankersen. 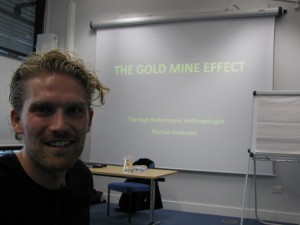 I asked Rasmus to tell me a bit about how he became interested in high performance and specifically the apparent clustering of excellence around certain nodes. He told me that when he was younger he harboured an ambition to play professional football, but injuries put paid to that. So, as he says, like many players with unfulfilled ambitions, Rasmus started coaching. During his time as a coach he encountered situations where apparently talentless players turned out to be world-class and others, who were great performers, fizzled away and never reached the heights expected of them.

Fascinated by why it is so difficult to identify talent and untangle performance now from future success, Rasmus quit his coaching role and identified five locations around the world where excellence thrived;

Ankersen then travelled to these locations and interviewed the athletes and coaches in these special places to try to understand how they consistently created such excellence.

When we started talking I asked Rasmus what were the main drivers for him taking on the challenge of identifying the features that linked the Gold Mines of performance. Rasmus started by saying that he thinks there is a curious relationship between elite performance and science. He pointed to the fact that in Kenya, whilst training with the greatest distance runners in the world, he never saw a heart rate monitor or found an athlete who knew, much less cared, what their VO2 Max was. In fact the only HRM strap he saw was strung between two posts and was being used to dry running kit!

Ankersen went on to talk about the ‘tale of the tape’ – a concept commonly found in boxing circles, where certain physical characteristics are identified as being optimum for different weight categories, despite the fact that arguably the greatest boxer ever – Muhammed Ali – deviated from pretty much every measurement that was expected of a heavyweight boxer. With such blind adherence to pointless ‘science’ it is no wonder that sport desperately need people like Rasmus Ankersen to unravel the myth from reality, especially when so many of the myths are based on apparent science!

With an obvious interest in how the brain and not the physical characterisitics of an athlete have such a fundamental impact on performance, I asked Rasmus what he thought about the comment that Ben Johnson made during his recent appearance on Radio 4’s Desert Island Discs, when he said that once he had reached a certain level of fitness, racing became almost equally mental and physical? Rasmus responded with the story of one Kenyan athlete who, when he heard on the radio that all the runners in the Kenyan Olympic team that year had returned with gold medals he assumed that was normal and that he was therefore destined to get a gold medal. Obviously huge amounts of hard work were required, but it was the belief – the mental element – that would, in the end make the difference for this athlete.

From talking to Rasmus, it seems clear therefore that it is this power of belief and the use of the ‘mental muscle’ that creates pockets of outstanding performance where genetics cannot possibly be the reason for the clustering of high performers. The examples are too numerous to list here, but in Mattew Syed’s book, Bounce, he talks about being at the centre of a clustering of world class talent in table tennis around a tiny area of a suburb near Reading in Berkshire. This cannot be explained by genetics. Looking further afield, Rasmus is quite clear that whilst, when we see the best endurance runners in the world coming from east Africa, the assumption is that their dominance is down to genetics, the reality is that their dominance is not down to genetics – it is down to sheer bloody hard work and a belief that they will be the best in the world.

So how far can that belief take us? I asked Rasmus about one of the athletes he interviewed for the Gold Mine project; Bridget Foster-Hylton, who trains at MVP Track Club. She says in the video that she trains differently and more than anyone else. That she believes that statement is undeniable. But I asked Rasmus whether he thought that Foster-Hylton did in fact train more and harder than anyone else and this was the key to her astonishing improvements and recent results, or was it simply that she believed that she trained harder and more and that belief gave her the mental edge?

Rasmus’ answer was intreaguing. He said that he believed that Bridget Foster-Hylton probably did do more training and harder training than the people she competes against. However without the self-belief and mental strength that she possesses, she wouldn’t train to the degree she does. It seems that it is a virtuous circle.

The future for the Gold Mine Effect

And at this point Rasmus and I had to wrap up so that he could get ready for the seminar. So I had one last question – I asked Rasmus what he is planning on doing with the research he is conducting for the Gold Mine Effect project? Rasmus, it seems, is not a man afraid to test himself and his theories for real. He is planning on opening a football academy near Rio in Brazil, where he will utilise all he has learned to help create a gold mine of football talent. From there he will focus on education and helping parents understand how to tap into the talent that every child has, but in so many cases is unfulfilled. So if you are reading this in 2030 and the greatest footballer the world has ever seen is thanking his coach and mentor, Rasmus Ankersen, for helping him reach his or her potential, you will know that Rasmus was indeed right and he has really struck gold in that mine of his!

Next week I will publish my thoughts on the seminar itself and there is a very special treat – Rasmus has allowed me to publish a section of his book, due out in the UK next year, which deals with the difficult issue of how to keep athletes hungry for success. Keep checking back for that.