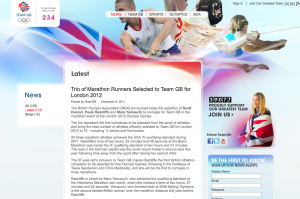 The British Olympic Association has announced three of the athletes who will compete in the marathon in the 2012 Games. The runners with early selection are… wait for it…

and for the men

You can read all about it here. No real surprises there then. I think that the two big questions that need to be answered are who will take the final place in the women’s race (anyone want to bet against Jo Pavey?) and whether any other British men will make the cut. After Andrew Lemoncello hobbled home in the Fukuoka marathon at the weekend in a miserable (for him) 2:24, I think that there may be the sad sight of only one GB vest on the start line of the Olympic marathon. I hope I am wrong – who do you think is in with a shout?

It’s not meant to be easy. Or a solo effort.

I am sat in a lovely apartment in Chamonix, with my Freestak colleagues (including my wife, who co-founded…

I am sat in a lovely apartment in Chamonix, with