This week two things combined to make me think about the benefits of racing in a group, so I thought I’d write a quick post about that very thing.

My coach, Nick, often asks me to think about the best runs and/or races I have ever had as part of the process of visualisation that I think all serious runners should go through. I now have a little database of such events that I can think back on and they pretty much all have one thing in common – I was not alone!

Working with another runner

One in particular race, that I am very proud of, was the first time I broke 75 minutes for a half marathon. It was in the Birmingham half marathon in October 2010 and the race had near perfect conditions: cold and dry with very light breeze. I had had a hard, consistent training period up to the race and felt in great shape for the Florence marathon a few weeks later. And I was in a pen at the front of the field reserved for those with a quick time under their belt already. 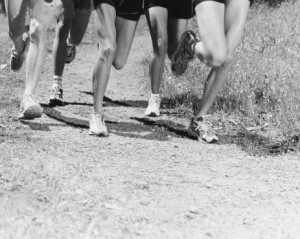 The best bit about this race, however, was that after about three miles I was in a little group of three – a runner from Bourneville Harriers and another chap who didn’t wear a club vest. After running together in silence for a mile or so, the Bourneville Harrier mentioned that we were on sub-75 minute pace and asked whether me and the other chap with him were aiming for that target – we confirmed that we were. From that point on (I’d say about 5 miles into the race) we worked together taking turns at the front of our mini-peloton to push the pace along and give the trailing pair a break from any headwind we encountered. As we rounded the bend and saw the finish line the group broke apart as Mr. Bourneville drew away and I in turn dropped Mr. No Club. I had finished in 74:20 with no doubt in my mind that had it not been for the psychological and wind-breaking benefit of working with the other two runners, I would not have broken the 75 minute barrier.

Then last weekend I was at another half marathon with a few club mates. One in particular, Mr. A, was intending to try to break the same 75 minute barrier, thereby earning a 3As Championship Start at the 2012 London marathon. The day was similarly cool and dry as it had been in Birmingham just over 12 months earlier. But this time there was a strong wind that would at times aid us and at other hinder us as we ran round a circular, and it must be said rather hilly course.

I watched Mr. A. pull away in the first few miles and before long I found myself alongside a runner from Ely Runners. Without any discussion we started working together taking turns on the front to give the other a rest from the really fairly strong wind. As I said the course was really quite hilly so there weren’t many opportunities early on to see far ahead, but after a while the course flattened out and suddenly I could see Mr. A ahead. All on his own. Ploughing into the headwind. Needless to say, Mr. Ely and I caught Mr. A. after a while by which time I think he had spent so much energy trying to maintain 5:40 min/mile that he was knackered and lost more and more time as the race went on.

Then last night while I was out on my run, I was listening to episode 97 of the Marathon Talk podcast when the hosts, Tom Williams and Martin Yelling started talking about racing tactics in their regular Training Talk feature (at around 46 minutes into the show). One of the things that they talked about was racing in a group and ‘tucking in’. They made the very good point that getting into a group does not exempt you of your responsibility to keep an eye on your pace and make sure that you do not slow down as the group slows down (which is common in the latter stages of most races) but they also talked passionately and with great experience about the benefits of working in a group, whether that is to break two and a half hours for the marathon or two hours for the half marathon.

My thoughts and tips

So this all prompted me to write a little about the benefits of working with other runners to achieve a goal. Here are a few tips;

I hope that helps and please, if you have thoughts on this or experiences to share please comment below… in a group if possible!