There has been much written about the recent emergence of the US as a force to be reckoned with in distance racing. The likes of Chris Solinsky (10,000m PB 26:59.60), Bernard Lagat (5,000m PB 12:53.60), Ryan Hall (marathon PB 2:04:53), Meb Keflezighi (marathon PB 2:09:15), Dathan Ritzenhein (marathon PB 2:10:10), Brett Gotcher (marathon PB 2:10:36) and Jason Hartmann (marathon PB 2:11:06), to name but a few, all point to a bright future for US distance running. But as American coaches and commentators are at pains to point out, becoming a great distance running nation is a slow process (and as an aside I would argue we have not even really started on this process in the UK in any meaningful way yet).

Since heroes such as Alberto Salazar, Dick Beardsely, Bill Rodgers and Frank Shorter lit up the world running scene, there has been something of a lost generation. But now the athletes I have mentioned above are looking like the green shoots of recovery. And from what I understand, these luminaries at the pointy top of the pyramid are being followed by a larger and larger group of hard-working and determined young runners. 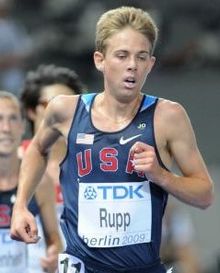 But the really exciting news that has been announced this week is that Mo Farah’s training partner, and another star in Alberto Salazar’s group at the Oregon Project, Galen Rupp, is due to run in the up-coming US marathon trails for the 2012 Olympics. This is big news!

The way the US picks its athletes for the Olympics, certainly in the marathon, is by holding a race. My understanding is that this ‘do or die’ way of choosing the team for the Olympic marathon is something that US Olympic committee is very proud of, albeit the process has had it’s share of controversies over the years. Indeed the tone of the text on www.marathonguide.com gives some insight into how dear the idea of a one-off smack-down, is held:

Most countries around the world use a selection committee to choose their Olympic Team Members, but not the USA. Prior to 1968, a series of races were used to select the USA Olympic Marathon team, but beginning in 1968 the format was changed to a single race on a single day with the top three finishers selected to be part of the Olympic Team and the fourth and fifth finishers designated as alternates. As a once-every-four-years opportunity to be selected to the Olympic Marathon team, the USA Olympic Team Trials is arguably the most important marathon that many will run.

This year the ‘race for a place’ will be at the Houston marathon. The race’s website excitedly announced the news, thus:

On January 14, 2012, for the first time ever, USA Track & Field and the Houston Marathon Committee will host the men’s and women’s Olympic Trials Marathon on the same day, at the same site. This historic event will determine the three men and three women who will represent the United States in the marathon at the 2012 Olympic Games in London

What does Rupp’s entry really mean?

And now he is going to try for the US Olympic marathon team. Or is he? There is talk that he is going to start the race to help pace team mate Dathan Ritzenhein, at the behest of their coach Alberto Salazar. Taking the conspiracy theories one set further there is also talk that there is no intention for him to run at all – that in fact this is a red herring to put other competitors off their training and give Ritzenhein a psychological advantage. Or maybe he has just decided that he wants a crack at the marathon. Whatever the reason for his involvement, if Rupp races and does as well as I and many others think he will, then one of Ritzenhein, Hall or Keflezighi might not be coming to London next year. Which is interesting in itself…

… but not half as interesting to me as the thought that Salazar might be grooming his top runners for marathon super-stardom sooner than many predicted. And his top athlete? Mo Farah. Now his marathon debut would be exciting news!

It’s not meant to be easy. Or a solo effort.

I am sat in a lovely apartment in Chamonix, with my Freestak colleagues (including my wife, who co-founded…

I am sat in a lovely apartment in Chamonix, with