First and foremost I am a runner. But I never considered myself to be good enough to be totally one dimensional and so I have dabbled in sports alongside running, most notably the two seasons that I competed in triathlon. I was not very good at triathlon (arguably my best result was 10th in an Olympic distance race in Seaford, on the south coast of the UK) and I especially found the swim, or at least the start of the swim, very challenging. After a few attempts, I decided that my focus, at least for the mean time, would be on improving my marathon time. I am ashamed to say that it has been months since I went for a swim and longer still since I went for a bike ride. 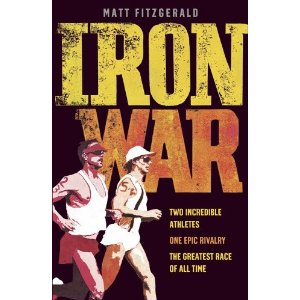 However I did enjoy my foray into multisports: I most definitely developed a respect for triathletes and to this day I am an avid follower of standard and ironman distance events. So it was that whilst shopping (by which I mean rushing into a shop, already scoped out as one having the item I wanted to get, and then rushing out again as fast as possible – I hate shopping per se!) I picked up Matt Fitzgerald’s new book, Iron War: a book that takes the 1989 Kona Ironman race, which came down to a duel between two legends of the sport – Mark Allen and Dave Scott – as a canvas onto which to explore the very nature of endurance and the things that make those that are great, great!

As happened with Open, Andre Aggasi’s book or Matthew Syed’s Bounce, I was captivated by the end of page one, in fact possibly by the end of the opening paragraph. Fitzgerald is a great writer and this means that not only is the book brilliantly researched and executed, the prose is also beautifully crafted and this makes the book a genuine ‘page turner’. I for one couldn’t put it down.

Inspiration and motivation on every page

Iron War has had such a huge impact on me, that I intend to explore some of the main themes in the book in more detail in upcoming posts, so I won’t write too much here. But I will say that the incisive discussions in the chapters that surround the narration of the increadible race that Allen and Scott took part in at the 13th Ironman race in Hawaii in 1989, cut to the core of many of the theories that I have been thinking and reading about recently relating to the power of the mind in endurance sport. There is no doubt at all that immense feats of endurance are built upon a basis of supreme physical fitness, but more than that is necessary to drive the protagonists of this book (and indeed many other stories) to achieve what they did. Fitzgerald uncovers research in fields such as neuroscience, spirituality and psychology to explain how in truth we are all capable of much more than we think we are and that indeed we often fail to be the best that we can possibly be, not because we reach a physical limitation, but rather a mental one that too few of us are prepared to push beyond.

So I cannot recommend highly enough that you buy a copy of this amazing book. We all know that the New Year is a time when motivation could do with a boost and this book should be just the thing to energise (or indeed re-energise) you and challenge you to push yourself that little bit further in 2012. I know that I will have passages rattling around in my head during tough training sessions in weeks to come.