New year: new ambitions or resolutions. That is the way many, many people mark another revolution of our planet around the sun. I have read hundreds of blogs and tweets and facebook updates listing plans for 2012 as well as quite a few people criticising the glut of new year’s resolutions. Those cynics might have a point, after all 1 January is identical to every other day so why decide that this is the point to get fit or save money or get a new job. But as regular readers know, I am a strong believer that as much as training is crucial for becoming the best runner you can be, motivation is equally important and if people find that an arbitrary date is enough to convince them to take on a challenge that they have shirked for the last 364 days, then I am all in favour.

I also think that the Christmas and new year period is a great opportunity for many people to take time to think about what they would like to do in the future – so many new careers, relationships or hobbies are formed in the crucible of a couple of weeks without work. Sadly however, many of the good intentions are also dead and buried by the time January comes to an end.

The issue of broken resolutions in sport and fitness is one that I know many people are concerned about – from the government to personal trainers and from health professionals to gym owners, they are concerned by the initial rush of enthusiasm for getting in shape followed by the plunge in numbers as the reality of what it takes to change from a sedentary life to one gilded with sport comes into sharp focus. So what seems to happen about now is donning of kid gloves as those with a vested interest in getting the nation in better shape try to gently guide people away from returning to their old ways:

But does the softly, softly approach work?

Make it count (or #makeitcount for the twitterati) 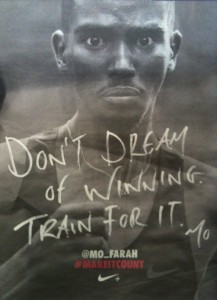 Nike seems to think that a more direct approach is required, which I am 100% in favour of. The new Make It Count campaign seems from my point of view to be a continuation of what, in some areas, Nike has been doing for a while: baring its teeth!

Sure there is still the slightly saccharine side to their marketing, most notably the advert of the girl who never stops running from dawn until dusk, foregoing all personal relationships and refusing to stop running even for a coffee (check out the ad here), while not breaking out in a single bead of sweat, let alone exhibiting any of the symptoms that someone running non-stop for days on end would suffer from. But this silliness has been rebalanced with a brilliant new campaign around making it count in 2012, following on from the #historystands campaign from last year.

Nike has taken a range of athletes – including two of my absolute idols: Mo Farah and Paula Radcliffe – and built a campaign around what they are going to do to make it count in 2012. And then Nike wrapped this uncompromising message around the Metro newspaper. I love that idea. Take a tough medicine, refuse to wrap it in a sugar coating, use unusually challenging imagery and stuff it down the throats of slightly hung-over, depressed and podgy-from-Christmas commuters. That’ll give them something to think about. Indeed when I saw the campaign I had a very strong urge to ask the people sitting around me what they were going to do to make it count in 2012? Eh? Yes, you… what are YOU going to do in 2012 to make it count?

So Nike, my cap is doffed to you. Please, I implore you, keep on with this style of challenging advertising. Sure, you might alienate the terminally-lazy and uninspirable, but I think that there are many people who will have looked at the steely gaze of Mo or Paula and thought to themselves

maybe this year it would be great to do something that means when I review the year at the dawn of 2013, I have done something to make it count

And what about me? Well I am doing everything I can to make sure that I achieve the marathon time I want in 2012. That will certainly make it count for me.