I recently wrote about the ‘difficult’ problem that the Kenyan selectors have choosing their marathon squads for the Olympics. It might be amusing for the rest of the world to watch the Kenyan selectors squirm, but there is a serious point here – how do you pick only three when your nation has produced such a massive plethora of incredible runners? 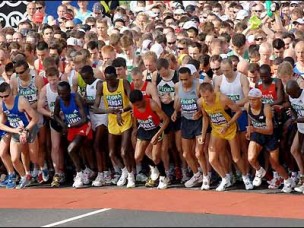 One idea that was mooted was that there should be a US-style smackdown with all the Kenyan runners who hope to be in contention racing one marathon and the first three past the post come to London for the Games. Brutal but arguably fair… and at least it takes the pressure off the selectors. The ideal race for this to happen at, of course, is the London marathon – an iconic race perfectly timed four months before the Olympic marathon and with a field that always boasts a fantastic array of the worlds leading runners.

Well it seems as though, whether the Kenyan selectors have sanctioned this plan of action or not, the smackdown is in fact coming to London. The BBC has reported that several of the best runners from Kenya are coming to the Virgin London Marathon in April (read the piece here) including:

Now if I was in charge of picking a team I might be tempted to say that the first three Kenyans in London in April are in the Olympic team, but life is rarely that simple. In a further twist in the plot two others will also be vying for a spot:

So I would say that if you are watching the London this year make sure you get there early or turn the television on to catch all the action, because I think this is going to be an incredible race. As Dave Bedford quite rightly has said:

With the Olympic men’s marathon due to be held here exactly 16 weeks later, we expect the battle for podium places to be even more ferocious than usual.

Too right Dave, too right!

* in case you are wondering, Geoffrey Mutai’s blistering 2:03:02 is not the current world record because the Boston course does not conform to the rules that the IAAF set out for an eligible course for a world record. But still… 2:03:02 – the mind boggles!

Book review: The Way Of The Runner by Adharanand Finn

At the end of last year the team behind Like