There is only one running shoe that I have ever owned every iteration of: Saucony’s Kinvara. I was given a very, very bright pair of the first release of the Kinvara to try out – they were my first foray into a more minimalist shoe. I then bought a pair of the Kinvara 2s, based on the fact that I really did like the original Kinvara. And then three weeks ago I received a very special box in the post – one of only 100 pairs of Kinvara 3s in the world (though don’t worry, they go on general release in the UK in May!)

I was very lucky to get the shoes two days before I went to Portugal for a two week training camp, so I really was in a position to give them a thorough road-test. As it turns out, one of the other two pairs in the UK were also in Portugal at the same time adorning the feet of the incredible Ben Moreau, who is undoubtedly more worthy of testing shoes (he ran a 143 mile week while I was out there with him!) so I can incorporate some of his thoughts here.

The main thing about the Kinvaras for me, is that they are part of Saucony’s minimalist range. The shoe has a 4mm heel-to-toe off-set which means they have a pretty similar profile to a racing flat. However every version of the Kinvara has been aimed firmly at the runner who either wants to begin the transition from ‘normal’ shoes with a 12mm or 15mm heel-drop or runners who are biomechanically efficient and are looking for a shoe that is a little more cushioned then their out-and-out racing flats. The Kinvara is the latter for me. 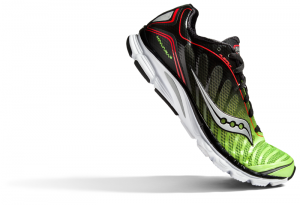 The first thing I noticed about the Kinvara 3 when I slid open the very, very cool looking box and removed the (rather large) Kinvara 3 t-shirt and USB stick that had been sent with the shoes, was the look. These shoes are very consciously stylish. There is undoubtedly performance benefits in the FlexFilm material that covers the upper of the shoe (which I’ll come on to in a minute) but from a purely aesthetic point of view, it is stunning. A big departure from the original Kinvara and the Kinvara 2.

The shoes felt typically light in my hand – Saucony say that they weigh 218g and that is what my scales at home read – but the FlexFilm gives them quite a robust feel. The sole is flared as with all the previous versions, but there are changes to the sole which are supposed to improve durability (I can’t comment on that yet and the shoes feel no different from the point of view of the sole material as far as I can tell).

There are differences from the first and second generation of the Kinvaras that I could feel however.

The first is the development of the Hydramax lining. When I was out in Portugal it was warm (I suppose that is the point of a warm-weather camp!) and yet the Kinvara 3s felt cool and dry even on the longest runs in the hottest part of the day. The new lining seems to make the shoe snugger, which is a real bonus as far as I’m concerned in a shoe with such a flexible upper, without making the shoe hotter or restrictive.

This combines with the FlexFilm, whose introduction has mean that the upper can be thinner than the mesh material that the first two Kinvaras were made out of and at the same time feel more robust. This all adds to the feel that this is a fast shoe, more like a racer-trainer then before.

The second noticeable difference is one that Ben and I both commented on – the sole feels firmer. I think that the Kinvara 2, whilst a really great shoe, suffered somewhat from being a bit squishy. I even felt that its usefulness as a racer was compromised by the softness of the sole. The new Kinvara deals with that perfectly. The sole is still flared and there is still plenty of cushioning to ensure that my legs don’t feel wrecked after a long run in them, but the shoe feels more accurate and punchy than earlier versions.

So there you have it. The Kinvara 3 from Saucony is still a shoe that I love. It is light-weight, low-profile and minimalist with the benefit of some cushioning and it looks great. I think that Saucony have done a good job of improving the responsiveness of the sole and the snugness of the upper whilst retaining the good things that all of the Kinvaras have shared so far. It will be my tempo session and long-run-with-faster-bits shoe for the foreseeable future.