I worry sometimes that my ‘focus’ when it comes to running is actually sheer, unadulterated selfishness.

I am incredibly lucky that my wife is so supportive, but it nags at me sometimes that she might get a touch frustrated by being woken before dawn day after day as I stumble across the bedroom on my way out for another pre-breakfast run. I worry that she might not appreciate the huge piles of festering kit or the rows of muddied shoes that decorate our home. My wife is hugely tolerant of the many ‘nights out’ that we have cut short so that I can get home in time to get a good night’s sleep before my Sunday morning long run, but for how long? Friend similarly may be getting tired of me being tired, or not wanting to drink until ‘after the next big race’. And how about work? Do my colleagues mind that I spend so many lunchtimes out getting in a quick run or stretching in the kitchen area?

But I like to think that this selfishness might simply be another face of dedication, which as we know is a crucial part of every athletes armoury. And three brilliant books I have read recently confirm this view, both to my horror and satisfaction.

I must admit that when it was published I was not all that interested in reading The Ghost Runner: The Tragedy of the Man They Couldn’t Stop I’m not sure why, but having picked it up a few times and read the notes on the back and having read a few early reviews, it didn’t immediately appeal.

Then a few weeks ago, whilst at the Brighton marathon expo, I heard Ron Hill talk about one of the times he ran against Tarrant in a marathon. Tarrant’s brother and lifelong supporter, who was alongside on his motorbike as Tarrant ran at the head of the field, with Hill tucked in behind him, told Tarrant that he shouldn’t do all the bloody work! I suddenly realised that John Tarrant was an important figure in British endurance running and I should read this book. I bought it from a bookshop close to my office the next day.

I should have read The Ghost Runner sooner. Having always had a slight anti-authoritarian streak (just ask me about my run-ins with TV Licensing recently!) I really felt for Tarrant and his battle to be allowed to run for his country – something that he was banned from doing, thanks to taking a paltry sum in expenses as a teenage boxer.

The book is rather light on details of how Tarrant trained, but what it is not light on is the trials that he faced at the hands of the immovable AAA. It is also full of the impact of Tarrant’s single mindedness when it came to running on those around him: his ever-supportive brother, his long suffering wife, his exasperated employers – the list goes on. 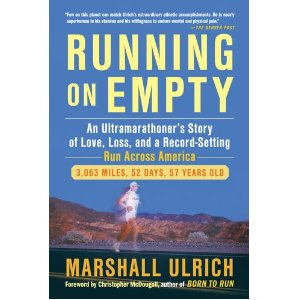 Having finished The Ghost Runner, my next book was one of my wife’s suggestions: Running On Empty Running on Empty: An Ultramarathoner’s Story of Love, Loss, and a Record-Setting Run Across America which is the autobiography of an amazing man called Marshall Ulrich.

Ulrich’s story is very different from Tarrants, because as someone still running now in a period of tolerance on the part of those who run athletics and an ultra-runner, Ulrich doesn’t seem to have had to deal with the insanity of shamateurism and the pompousness of stubborn athletics officials.

But Ulrich and Tarrant do share a couple of things – they are both ultra distance runners (Tarrant had a long love affair with the Comrades ultra marathon in South Africa, a love that sadly the organisers did not reciprocate) and Ulrich confesses in his book that he is as ‘focused‘ as Tarrant was.

In one very moving part of the book, Marshall describes how, having found running as a way of dealing with his first wife’s long, slow decline as cancer took hold, he left to go out for a run even as she begged him to stay with her in her distress.

And it doesn’t end there. Ulrich has had failed relationships after the loss of his first wife that he attributes to his running. He acknowledges that family life has suffered. He even planned his epic, record breaking run across America against the wishes of his third wife and you get the feeling that he was always going to do the run, whether she approved or not.

Having finished Ulrich’s book, I thought that something a little less intense would be in order. I found myself browsing the sports section of a huge book shop in central London and found Keep On Running: The Highs & Lows of a Marathon Addict by Phil Hewitt. The notes on the back promised a “light hearted account of [Hewitt’s] adventures on the road”… but despite Hewitt being what I would call an unremarkable marathon runner – with a personal best of 3hrs 20mins – the same theme emerges.

Because Hewitt is obviously a less extreme character than Tarrant or Ulrich and his targets are less extreme in their nature and duration, there is not the same requirement for compromise on the part of those close to him. But Phil still has to acknowledge that at least his wife, with a young family to deal with, has had to put up with a lot – losing her evenings with him after the children are asleep while he goes out for runs in the dark, traipsing around the London marathon course in the pouring rain whilst pregnant and with a two-year-old and, I suspect, dealing with all the extra washing of running kit that training for a marathon entails (though I might be wrong there).

So what, I hear you ask?

Well, it strikes me that we runners can be a selfish bunch, as these three books demonstrate. I am not saying for one minute that this is a bad thing, because I believe that it is better to be a selfish runner and have all the positive qualities that come with that, rather than a selfish boozer or a selfish gambler.

But these books have reminded me that life is about balance and I believe that every so often it is worth lifting one’s head and considering for a moment whether, in the pursuit of a new PB or a new distance, one is not sacrificing too much. Maybe once in a while, us runners should take our loved one out for dinner, or go away for the weekend and leave the trainers behind or maybe read a book… there are three about running all of which I can highly recommend!

All three of the books are great reads in their own rights.

The Ghost Runner is brilliantly well researched and is written by a writer, so the prose flows and the book was a real page turner for me, filled with uplifting moments, tragedy, inspiration and the odd word of warning.

Running On Empty, written as it is by Ulrich, is perhaps a little rougher, but no less wonderful for that. In this book, the reader gets a warts-and-all insight into what it takes to achieve feats of endurance that would seem utterly impossible had they not been done! A great book for anyone wondering what lies beyond the marathon.

And Keep On Running does deliver what it promises on the cover – a ‘beautiful description of one man’s passion for the open road’ according to Jo Pavey. The book is funny, inspiring, honest and moving. As a runner myself I really connected with Hewitt’s story and only wish I could have described my journey so far with such eloquence.

The Ghost Runner: The Tragedy of the Man They Couldn’t Stop by Bill Jones is published by Mainstream Publishing priced £12.99

Running On Empty: An Ultramarathoner’s Story of Love, Loss and a record-Setting Run Across America by Marshall Ulrich is published by Avery and priced £11.99

Keep On Running: The Highs & Lows of a Marathon Addict by Phil Hewitt is out now and published by Summersdale priced £8.99