In the last few weeks I have had the opportunity to meet a few of the Nike contingency in London, who seem to be here to coincide with the Olympics. Understandable given the number of Nike sponsored athletes competing in the Games.

But Nike are also here to showcase some new products and this morning, at a breakfast hosted by Martin Lotti, Nike Olympic Design Director, I was able to get up-close to three new products and learn about one aspect of Nike’s business that I think many people do not know about and which I think is worth shouting about.

Skin in the game

The first new developement that was showcased by Martin Lotti and his colleague, Scott Williams, Creative Director Olympics and Innovation at Nike, was the new Nike Pro TurboSpeed suits which sprinters such as Alyson Felix will be wearing in London.

Scott started off by explaining that the suit’s technology has been in the process of development since Cathy Freeman wore her amazing outfit in Sydney in 2000.

The idea behind the suits is that, compared to skin, the suits surface is ‘faster’ because it reduces drag and improves efficiency. There is clearly masses of technology that has gone into the suit (and if you want to learn more and satisfy your inner-geek, you can read more about the suit here) but as with Formula1 cars, the real interest for the majority of us, is finding out what all this technology will mean for us. After all, I can’t see too many people turning up to the local ParkRun in a suit that is designed to improve speed over 100m by 0.023 seconds and really leaves nothing to the imagination!

The drip-down from the TurboSpeed suit, is more of a concept than a particular piece of technology: it is the idea of simplicity and ‘zero distraction’. One of the things that is very noticeable about the skin suit is that there is nothing fiddly to annoy the wearer. Indeed there aren’t any zips throughout the whole range of items. The sleeves are finished in a way that leaves a seamless end. The are no tags or buckles or clips.

And this is what every-day runners can expect from the range that is available to mere mortals in the future – fewer seams (and where there are, they will be flat-locked), neater finishing, less bells-and-whistles.

The next product we were told about was the FlyKnit shoe. 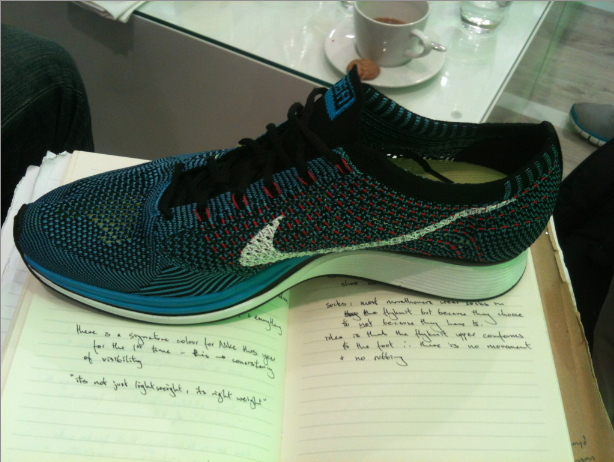 This is a product that I am really interested in trying (big hint there, Nike!) and so I hope that I will be able to post a review of the shoe from the point of view of having worn it soon. But in the mean time, having had a chance to talk to Martin Lotti about the shoe one-on-one and having seen a presentation of the shoe from Ben Shaffer, studio director for Nike’s Innovation Kitchen, I thought I’d let you have a look and describe why I’m excited about it.

Following the simplicity theme, the idea behind the Fly Knit is so simple that I can’t believe that it wasn’t thought up before – but then isn’t that true for all the greatest inventions in the world?

Put simply, the upper of the Fly Knit is knitted from fairly thick course yarn in one piece, which incorporates the super-strong, flexible Fly Wire strands that give the upper the strength it needs. That’s it! No waste, one piece construction and an upper that wraps the foot completely.

We were shown a few of the prototypes of the shoe, which I took some snaps of, and it seems like such an obvious development, especially when you see it in this context.

At the meeting this morning the question of whether the shoe can be work without socks and i must say that the answer from the Nike team was a little less than convincing, but without trying the shoe, I can’t comment. But I will definitely be trying a barefoot run because this shoe literally is seamless!

You can’t improve what you can’t measure

Having looked at some of the simplest bits of kit I have seen for a while, we then moved on to Nike’s fascination with gamifying activity and measuring every aspect of sport.

From what I can see Nike is building a spider’s web of technology.

There is the Nike+ tab for their shoes where data can be uploaded to an iPod or iPhone and on the Nike+ website.

And now the Nike+ Training range of shoes, with sensors built into the sole, track “every rep, step and drill”

I don’t necessarily feel a great affinity for all this technology yet – I think that the Nike+ interface is not quite right and the data available is not what I want for my training. But Nike are innovating fast and I think that what we are seeing in the market now is just the start as far as what Nike+ will be able to tell athletes of all levels in the future.

So there are the three developments that Nike showed me this morning. All good stuff. But the overarching message that was delivered this morning was not what I was really expecting and certainly something I am excited about – sustainability.

The arsenal of Pro TurboSpeed items that are available to elite athletes at the 2012 Games are all made from recycled plastic drinks bottles, with 82% recycled polyester fabric.

The Fly Knit – aside from the benefits that Nike suggests comes from a knitted upper – produces no waste. Unlike a traditional shoe where the panels are cut from a piece of material where all the excess is thrown away, the Fly Knit is knitted into a single ‘butterfly shape’ and glued onto the sole. No waste. And talking about glue…

Nike told me today that they are so committed to the environment that when they designed the Fly Knit, they wanted a glue that didn’t contain the toxins that are usually present in shoe glue. So they developed a non-toxic glue and then offered the secret recipe to all their competitors.

Of course, Martin was a pains to point out that Nike are a performance-first company, but it seems that they really are finding ways to produce products that will help runners – from the most elite individuals on the planet (most of whom are in east London right now) to the slowest jogger out there – whilst also trying to reduce their impact on the planet. If they can do that, then I really think they’ll deserve a gold medal!