In this review, Michael Shelton took the time to review the book that takes an in-depth look at the rivalry between Sebastian Coe and Steve Ovett and ultimately resulted in such spectacular races in the late 1970’s and early 1980’s. Having read the book myself, I have then added my thoughts at the bottom – Simon

My earliest memories of athletics were of events like the Golden Mile in Oslo and seemingly amazing feats as runners tried to break 3 or 4 world records in a matter of weeks. It was a golden age of British athletics, being led by two men,  Steve Ovett and Sebastian Coe. 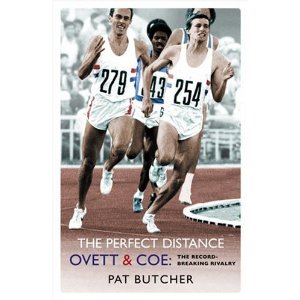 The Olympics are just around the corner [Michael sent this review before the Games started but I have only just had a chance to post it here. Sorry Mike! – ed] and despite all the predictions of a record medal haul, there are few expectations for team GB in the men’s 800m and 1500m.

Yet just over 30 years ago, in the Communist stronghold of Moscow at the 1980 Olympics, it was the British that ruled middle distance running with an iron fist. In 1984,  we went into the Los Angeles Olympics with the Olympic champion (Coe), the world record holder (Ovett) and the world champion (Steve Cram). It is scarcely believable these days.

The Perfect Distance is the fascinating story of Coe and Ovett, two driven athletes, following contrasting timelines from promising beginnings through to titles, world records and Olympic triumphs.

The title refers to the magical mile distance, but also how a middle distance runner has to be the perfect athlete. They must have the speed of a 200m runner, the endurance of a six miler and the tactical savvy to win a race at any speed and from any position.

The fact that Coe and Ovett rarely faced each other in a competitive race meant that the Moscow Olympics was even became a national talking point in the USA, a country who had boycotted the games.

The events of 1980 may be well known (Ovett won the event, the 800m, that Coe was favourite for, while in the 1500m the reverse happened), but it’s the more personal moments that Butcher captures and you come to understand how these champions were moulded.

Butcher draws the battle lines between the pair –geographically, physically  and socially. Coe would become an MP and head of the London Olympic movement, while Ovett has remained out of the spotlight, even to the extent of being the only living British Olympic gold medal winner not to appear on special series of BBC Radio programmes. Rather than by these great enemies represented in the media, they were just very different personalities who would never be friends in any walk of life.

Like the Boat Race, most of the media and watching public lay their allegiances in either the Ovett or Coe camp. However you would be hard pressed not to develop a huge amount of respect for the other by the book’s conclusion.

Imagine being in the shoes of Coe, after running the worst race of your life at the Olympic Final. Rather than getting encouraging words from his father, he instead receives a four letting dressing down from his coach (aka Dad) in front of a packed press corp.

Ovett is remembered as incredibly hard working and a natural runner. He could complete the 400m in under 50 seconds, won a 5000m gold at the Edinburgh Commonwealth Games in 1986 and clocked 1hr5 for a half-marathon he entered on a whim. His unwillingness to speak to the media saw him portrayed as aloof, but the picture Butcher moulds is of a shy man with a complicated family who just wanted to run.

The eyes of the world may have been on only two men, but Butcher does not neglect the forgotten men. From the Scandinavians who tried to disrupt the gold parade, to German Olaf Beyer, who split the Brits to grab Olympic silver in 1the 1500m, we see how the Coe and Ovett phenomenon was portrayed around Europe and the world.

Inspiring, humbling and ultimately a very human story, I finished the book thinking that athletic perfection may be unattainable, but here were two runners who would give everything to try and reach it.

I must start by saying that I agree completely with everything Michael has written. I think that Pat Butcher elegantly and accurately captures the rivalry that drove Coe and Ovett to achieve marvelous things in middle distance running during a period when Great British runners were unsurpassed at those distances.

I think for me, the most wonderful thing that Butcher manages to capture is the value of the rivalry from the point of view of driving the protagonists on ever harder. It is almost as though they were in a world of their own – team mates and yet fierce rivals who knew how hard the other was training and racing and as a result pushed themselves harder and harder to not be outdone.

This is epitomised for me in a story that Coe wrote about in the Telegraph:

It was a harsh winter (harsh enough to bring down a government) but I ran 12 miles on Christmas morning. It was a hard session and I got home, showered and felt pretty happy with what I had done.

Later that afternoon, sitting back after Christmas lunch, I began to feel uneasy but was not quite sure why. Suddenly it dawned on me. I thought: “I bet [Steve] Ovett’s out there doing his second training session of the day.” I put the kit back on, faced the snow and ice and did a second training session. I ran several miles, including some hill work.

Not long ago, over supper in Melbourne, I told him the story. He laughed. ‘Did you only go out twice that day?’ he asked.

It should never be forgotten that the fruit of the rivalry between Coe and Ovett (and to some extent the young pretender Steve Cram when he joined the fray and pushed the two greatest middle distance runners to even great heights) were magnificent:

An amazing period and one that might not ever be repeated. As the Olympic Games of 2012 come to a close, we have been treated to the incredible running ability – hard work and humility being the fuel – of one Mohammed Farah. But he has no domestic rival. There is no one in the UK that he fears and indeed it is arguable that trying to find a team mate who would push him to new limits was part of the motivation for moving to the Nike campus in Oregon to train with Galen Rupp. So I hope that the Olympics of 2012 has a part to play in lighting the fire of inspiration into at least two youngsters currently taking their first steps in athletics – let’s all pray for the next Coe and Ovett!

It promised to be one of the most exciting races ever.  The London Marathon was to bear witness…

Mo Farah and the ‘double-double’

It promised to be one of the most exciting races

I don’t have a huge amount to add to what