I was reading a book recently called Tracking Heroes and was especially fascinated by Emil Zatopek: his training methods, attitude to racing and the struggles in his life and I thought I’d take a minute to share one of the most amazing stories I have ever read with you – that of the 1952 Olympic Games in Helsinki.

In the post-World War Two Games in London, known at the Austerity Games, Emil Zatopek has won gold in the 10,000m and silver in the 5,000m. Zatopek, standing 5ft 8inches and weighing 145lbs, had very little international racing experience, but that didn’t stop him from making an amazing debut. Shortly after the Games in London he married fellow Czech athlete Dana Ingrova, herself a gold medalist in the javelin in later Games. 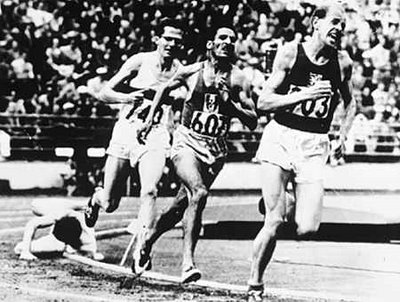 In Helsinki, Zatopek raced in the 10,000m and the 5,000m, defending his 10,000m title and going one better in the 5,000m to take gold in that race too. Never an elegant athlete, the descriptions of his contortions as he raced to the line are legendary. But what came next was the most impressive of all.

Zatopek entered the marathon… his first one ever.

Team GB’s Jim Peters, who held the marathon world record with a time of 2:20:42, was expected to win. His personal best was about five minutes better than everyone else in the field, well at least of those that had run a marathon before!

On the start line Zatopek sought out Jim Peters, hoping that the favourite would help him pace the 26.2 miles. Zatopek found the British world record holder and said

Hello are you Peters?

I am Emil Zatopek from Czechoslovakia, I am very pleased to see you.

From the gun Peters set a fast pace, with the first five kilometres completed in 15 minutes 43 seconds, then the 10 kilometre mark was passed in 31 minutes 55 seconds.

Jim, the pace. Is it good enough?

Peters replied “Pace too slow”, even though he was beginning to feel the effects of his efforts so far.

Zatopek thought about this for a moment and then said

You say too slow. Are you sure the pace is too slow?

Peters again said ‘yes’, at which point Zatopek shrugged his shoulders, before accelerating away near the 20 kilometer mark.

For the third time in 8 days, the Helsinki Olympia stadium was filled with the chant ‘Zat-o-pek! Zat-o-pek!’ as their hero ran the last lap of the marathon in first place.

The gap between gold and silver ended up to be over two and a half minutes, with Zatopek crossing the line in 2 hours 23 minutes and 3.2 seconds.

After his victory Zatopek said:

I was unable to walk for a whole week after that (the marathon), so much did the race take out of me. But it was the most pleasant exhaustion I have ever known.

Zatopek raced as he lived – with all his heart and a great sense of wonder. He died in 2000 and it will always be one of my few regrets that I didn’t have a chance to meet him or hear him speak. I think he must have been an amazing man. 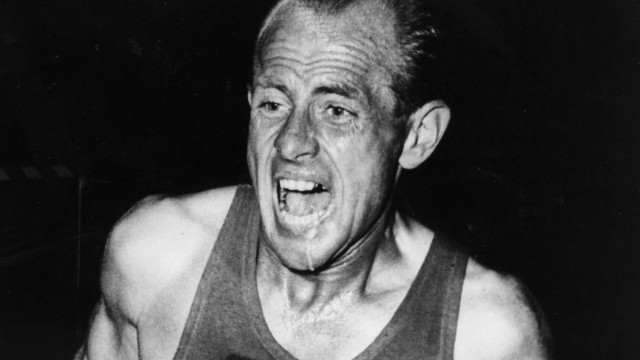