For many people in the UK, the 1500m is a race that had its heyday with Coe, Ovett and Cram. After them – after Peter Rono put an end to Great British dominance of this event in the Olympic final in 1988 – the 1500m sort of lost its shine.

But I think that this is one of the most iconic distances of all. Please don’t misunderstand me, I love all running distances. But I think certain distances are special. They, for me, are about the raw pursuit of fulfilling our genetic heritage. The 100m is impressive, but as a species we’re pretty crap at running fast over short distances and every predator in the savannah would have absolutely no problem making Usain Bolt lunch if he was caught 100m from safety. A squirrel would outrun Bolt by rather a large margin over 100m (especially if the savannah predator was happy to have either one for lunch!)

But the 1500m becomes the sort of distance where the genetic benefits that come with being homo sapiens really come to the fore. Sustained speed-endurance that has beauty, grace, power, tactic… everything basically.

And this clip from the BBC series Faster, Higher, Stronger really illustrates the point that post Coe-Ovett-Cram, the 1500m did not stagnate. It found new heroes. It reached new heights. It became an even more beautiful race to watch. And Hicham El Guerrouj was at the forefront of that. He and Bernard Lagat, now a US citizen and one of Mo Farah’s keenest rivals, created one of the most memorable races in Olympic history. You cannot fail to be moved by this. Have a look at the clip and let me know: how does this make you feel? 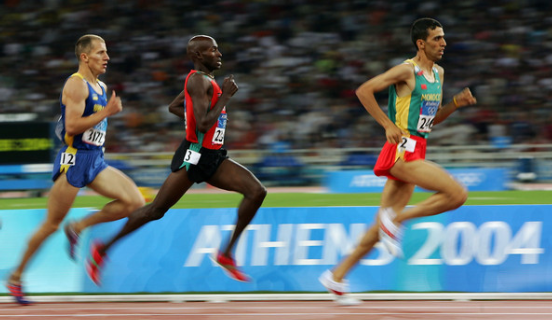