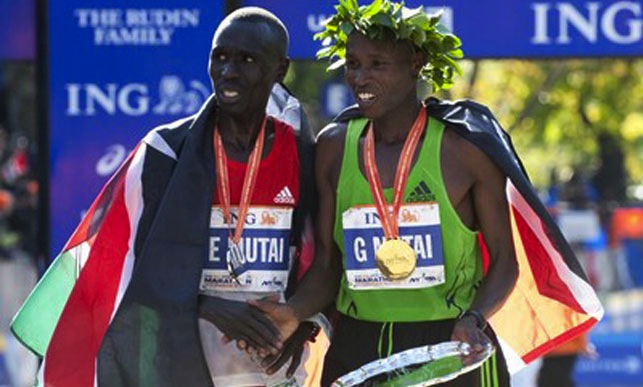 How do you feel when someone you consider to be equal to (or even lesser than) you in any area of life, does better than you? Are you happy for them? Does it inspire you? Or do you envy them and look for reasons why their success is undeserved or a fluke?

Yesterday I talked about it with two people. The first conversation involved a tale about a friend of mine who 15 years ago was a top class national level runner who had been training with a colleague who had gone abroad to run a marathon. This was before the advent of the internet and instantaneous results, so my friend had to wait for his colleague’s return to find out how he had done. Having trained for many, many hours together, my friend thought that his colleague might run 2hrs 25min for the marathon or slightly quicker on a very good day.

On the day that the runner returned to work, everyone was desperate to know how he did. As he arrived for work, they asked him and he nonchalantly said:

My friend was stunned – this was a very, VERY good time and he had to keep his incredulity in check and try to sound sincere as he congratulated his colleague on this amazing run. Then his colleague came clean:

Yep, I was running fine to eighteen miles, then I dropped out!

My friend said that he felt a very palpable sense of relief, which was so strong that he struggled to find the right words to commiserate with his colleague.

Then during another conversation yesterday, I was talking to a friend who told me that his training partner, who so far in their running careers had posted times almost identical to my friend for half marathons, had recently run a race and posted a time four minutes quicker (and importantly broken through one of those time barriers that become so important in running). My friend’s reaction was to be delighted by his friend’s result and to use that as a way to motivate himself to train harder to ensure that he regains parity or leaps ahead of his friend.

And I have stories from my own experience. For me and many of my running club mates, there have been barriers that we have broken en mass. I remember joining the club when none of the current members had broken the three hour barrier. Within a year, once one of the members had done run ‘under three’, half a dozen of us had. Then the London Marathon AAA Championship entry times – 2’45” for a marathon or 75 minutes for a half marathon – came into view. Some have broken these times whilst other will soon do so. And obviously with a number of athletes chasing improvements, there is a sense of competition which is healthy.

But sometimes there seems to be a sense of resentment too. I’ve been told that some club mates have heard about my successes and said something along the lines of “Well if Simon can do it, anyone can” (which by the way, I totally agree with – if anyone is prepared to put the work in then they can ‘do it’ too and more). And with a number of my club members racing this autumn, there has been talk of who will smash through the next barrier (whatever that is) and claim the crown of the fastest current club member.

The thing is, I really genuinely love it when people do well. I love that they have put in the work (and conversely, I would really hate it if I thought they had cheated their way to success). I love that it inspires me to do more and try harder. I also think that anything I have achieved with my running should be over-hauled – my personal bests should be very achievable for anyone willing to put in the work.

And most importantly of all, other people’s success does not change what I have achieved. My PBs do not suddenly get slower because someone I know has gone quicker. I don’t feel diminished because Patrick Macau is running under 2 hours an 4 minutes so why should I feel any less pleased with my times because a friend or training partner works hard and races well to finish a marathon quicker than I have. That is just a shining light showing me the way I should go.

So this is an appeal to every runner reading this: let’s celebrate all our successes. Let’s try to inspire and assist and lift up the best runners we know, no matter how fast or slow, and then use their achievements like a magic carpet, to whisk us up to the next level. Competition is great, but remember that there are no losers in running – every race is a victory. Every PB should be celebrated. And you might find that the person who has just run a little quicker than you is your greatest ally when it comes to improving your own performance.