Be Careful What You Wish For

There is a well known saying be careful what you wish for because it might just come true.  I have said many times that I would like to visit Berlin for a weekend.  It’s a city known for its incredible history and culture, but for a runner it is best known for its world record Marathon course and the opportunity to set a PB.  After a chequered couple of years of running, my PB moment hasn’t arisen and my trip to Berlin has slipped further down my travel agenda.

So, when I received an invitation from Asics to visit Berlin it was as if the genie had just popped out of the lamp and my wish had been granted. It wasn’t to run the Marathon but to discover Asics interpretation of natural running and get a sneak preview of their new Gel-Lyte 33 shoe to be launched later this year [ please check back in a couple of weeks for a review] It also happily coincided with the Asics Grand 10K.

The big topic for discussion in running circles in the last couple of years has been barefoot running and natural running.  Natural running – as distinct from barefoot running – enables the body to move in the most efficient way enabling the runner to move in a motion that most accurately mimics how one would naturally run barefoot, whilst protecting the feet by way of running shoes.  It’s entirely reasonable of running brands to assume that most of us do need to wear shoes when we run.  The majority of people live in an urban environment and therefore barefoot running simply isn’t practical. What we need therefore is a shoe that allows natural movement whilst providing adequate protection from the hazards of urban living.

The clever people at Asics have recognised that the trend for natural running is gathering apace and have therefore tried to open it up to all levels of runners by developing a range of shoes that help the runner transition from running in heavily cushioned stability shoes to a minimalist shoe.

Asics have worked with Dr Matthias Marqaurdt to develop a range of shoes to enable the runner to best experience a natural running technique.  Dr Matthias is – by his own admission – Germany’s leading expert in all matters relating to natural running.  He has dedicated his entire working life to researching ways of making the runner more efficient and able to run injury free.  He has developed his theories by studying movement analysis and performance diagnostics of both athletes and regular runners. And by studying how man runs barefoot.

On a sunny Saturday in Berlin we are privileged to have the man himself explain what natural running is.  He begins by telling us a series of facts including that between 30-50% of runners will be injured every year.  As a Doctor and serious runner himself, his goal is injury prevention and he believes that by perfecting our running technique we can minimise injury.  So his aim is that we achieve the most effective running gait – and that is one that closely approximates the natural human motion sequence.

He helpfully explains the difference between a heel strike; a mid-foot strike and a forefoot strike.  If we all ran barefoot as we did for the first 180,000 years of mankind then we would all be forefoot strikers.  However with the advent of shoes and latterly cushioned running shoes, the majority of us have become heel strikers.  Mid-foot strikers are the least likely to become injured and ideally we can learn to become efficient mid-foot strikers and (re)-learn how to run efficiently.   This involves activating and strengthening the right muscles; paying attention to technique and of course wearing the right shoes.

So – in summary – a serious runner who is well conditioned should have a second pair of training shoes to help achieve a natural running technique on shorter training runs.  And this is the shoe that Asics has developed with the Gel-Lyte 33.

Dr Matthias is certainly a fine specimen of German engineering and if we all had bodies as highly conditioned as his we would all be perfect mid-foot strikers running with the prescribed natural running technique, in perfect unison, and all running injuries would be eradicated. However, a conditioned body like his takes weeks, months and years of dedication and the average obese German – which he keeps referring to –  will probably never achieve it. 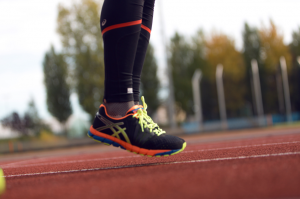 However some of us keener runners can aspire to a natural running technique and we are therefore kitted out in some rather fabulous new kit and a pair of the new Gel-Lyte 33 shoes to test our aptitude for natural running.

Our master class in natural running involves some fairly simple calf muscle activation exercises; bench step ups to activate the gluteus maximus muscles and some side plank leg raises to activate the gluteus medius.  We are then encouraged to try some exaggerated poor running techniques to emphasise what the correct technique looks and feels like. We finish with some arm exercises and a group exercise to get a feel for running cadence.

It certainly made me pay attention to technique and get a feel for how one can improve efficiency and speed through small adjustments in form.  The natural running shoes definitely felt different to my usual heavy stability shoes.  The obvious but only word I can think of to describe the experience:  natural.

After a late Saturday night I woke up on a Sunny Sunday morning in Berlin ready to run the 10K.

This was the icing on the cake or the cherry on top of a weekend dedicated to running.  Conditions were perfect and for anyone in PB shape it was a dream come true.  With little time to prepare for my 10K and well off PB shape I was only here to have fun.  But it was a great opportunity to try out the techniques I had learned the day before.

The race was started with Germanic precision by Jan Frodeno –the 2008 Gold medal winning triathlete.  Sadly, he was also well off PB shape having fractured his fibula head after a spectacular fall in a race.  Still wearing his natural running shoes, he hobbled on crutches.

The Berlin Asics Grand 10 should definitely be on the racing calendar for anyone aiming for a PB. The loop course consists of wide, flat roads with only a couple of very minor inclines and a short cobbled stretch to hinder the pace.  The only drawback is the lack of timing along the course.  I was running without a watch and the only split I got was at 5K.  However I somehow managed a metronomic pace. I ran a perfectly even split, keeping what felt like a steady pace.

I was clearly enjoying myself and having a little bit too much fun.  At the 7K mark I decided it was time to implement the arm movements I had learned under Dr Matthias’ tutelage and see how long I could maintain the action.  I also observed my push off and noted that as I extended my back leg I did seem to increase my speed.  However I quickly reverted to just running which is what I think I do best.  I also took a moment to think about what I think about when I am running in a race which appeared to be nothing more than whether I think I can realistically go any faster.  I observed my thoughts to see how much of racing is in the mind and how what we tell ourselves affects our performance.  Once I saw the 9K mark I decided it was time to stop thinking about my arm movements and observing my thoughts and just start trying to run a bit faster.

I was a long way off the leaders. At the front of the field was Leonard Komon in a very fast time of 27.46.  He holds the current course record of 27.12 set in 2010 and his time is the 10th fastest recorded for the 10K this year.  The womens race was won by the 22 year old German Anna Hahner in a very respectable 33.50 only one week after running 2.30.37 in the Chicago marathon.

Catherine Wilding took up running in 2004 and in 2005 ran her first marathon. Within two years, she was invited to run in the professional field in the New York City Marathon. Already in her thirties, she put her success down to dedication and self belief. Like many runners she has suffered from injury and set-backs yet still believes she can set new PB’s. She lives in Chelsea, London and trains in Hyde Park and Richmond Park with the Serpentine Running Club.
View all