When I started running I lacked loyalty to any shoe brand, let alone to any one model. I went into Runners Need in Camden and ended up with a different pair of shoes every time. I actually don’t think this is a bad thing: I think that as my running developed, I probably needed different shoes – not least because as I lost weight and improved my times, the heavy, super-cushioned Nike Pegasus that I had been sold on my first visit to the shop were no longer appropriate.

While I was still in my dis-loyal phase, I bought my first pair of Mizuno running shoes. I watched a video interview with Andrew Lemoncello, where he talked about the Mizuno Wave Rider being his “everyday training shoe” that he would use for easy runs, recovery runs and even for off-road runs. I thought they sounded perfect so bought a pair.

And indeed they were ideal. The shoe was light but still cushioned enough to be used for the majority of my runs, especially as the mileage increased as I got closer to a marathon. The forefoot had just enough give to soften the effect of running on the pavements around London but not so much that they felt clumpy. And the plastic ‘wave’ that gave the shoe its name and provided the cushioning in the heel, was rigid enough that the shoe didn’t have any of the squidgy-ness that I had found with other cushioned shoes.

After a while I found that as far as shoes were concerned, I was being drawn back to the same models time and time again. I started to value consistency because I didn’t want to run the risk of changing anything that might cause an injury or a niggle and disrupt training.

I think that I was also becoming lazy about reading reviews and trying to figure out what was going to be better than the shoe I had. So I ended up with several pairs of the Adidas Adios AdiZero racing flats (a couple of which came from Adidas as shoes for me to review). You can read a review of the Adidas shoe here. And a number of pairs of every version of Saucony’s excellent Kinvara (again, thanks to Saucony for sending me a couple of pairs as they were released). My Kinvara review is here.

And I bought more pairs of the Mizuno Wave Rider. I bought the Wave Rider 13, 14 and 15 – at least two pairs of each. The thing is they just felt great straight out of the box. The forefoot in every version has remained nice and roomy, so no foot crushing there! The upper and especially the collar around the ankle, is neat and fits really well. I liked the fact that there is enough grip for running on grass but the shoes are not so lugged that they grip the road like a koala on a eucalyptus tree.

There was a blip – I didn’t like the Wave Rider 14 as much as the 13. But once the 15 came out, the shoe was better than ever – lighter and slightly firmer in the forefoot. Still ideal for easy, steady, and recovery runs and for my long runs.

Now there is the Mizuno Wave Rider 16.

Having had a pair of the Wave Rider in my arsenal of shoes for three editions of the shoe, when the 16th version was released, Mizuno’s PR company wrote to me and asked if I’d like to try a pair. I did! 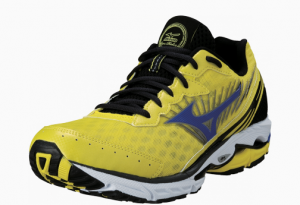 The Mizuno Wave Rider 16 is my favourite yet. The AP+ midsole material feels as light as ever but seems to offer just the right amount of cushioning, which means these shoes are perfect for tired legs on recovery runs and for long runs. There is not so much cushioning however, that you feel disconnected from the ground so I have worn the Wave Rider for tempo sessions.

The outsole seems really durable and the flexibility that comes from grooves cut across the foot – they are probably called something fancy, but to me they are just groves! – means that the shoe can be firm without being stiff.

As with the blue pair of the 15s that I bought (I wanted a pair of the limited edition purple ones, but not so much that I was going to go out of my way to spend more money to get a pair… they’re running shoes after all), the shoes are striking looking. The ones I have are bright yellow. Initially I was concerned that the upper looked less breathable than earlier versions and so far I have only been able to run in them in cooler conditions, but they seem to be pretty good at keeping my feet at the right temperature.

And there doesn’t seem much more for me to write about. I think that these are really good shoes. There are some rivals in this sector of the market – Saucony’s Triumph and Brooks’ Glycerin are good options. But I think that I will have a pair of the Wave Rider clogging up the stairs in our hall way for a while to come. If you’ve run in these shoes I’d love to know what you think.