I just watched a report on the BBC website about how technology is being used to help people measure every aspect of their fitness and well-being. You can see the report, from the technology show in Las Vegas here.

This programme got me thinking. I am not a huge user of fitness technology. I have a really knackered old Polar, that is now held together with super-glue and an elastic band, and apart from that, I don’t use any technology. Nike were kind enough to give me a FuelBand, but it doesn’t work now and even when it did, I didn’t think it was that much use for running.

But the technology industry is awash with gadgets that people can use to track their exploits – the ubiquitous GPS watches and heart rate monitors. There is the aforementioned Nike FuelBand and the competitor products that are coming out. There are dozens, if not hundreds of smart-phone apps that use the in-built GPS to measure speed, distance, altitude and so on.

The value of technology

But I wonder what the point of all this is? I understand that people training for a marathon want to know how far they have gone and how long it has taken them (and therefore what speed they were running at). But that can be done with an analogue clock and a map. Just ask Bill Adcocks, who I interviewed for Running Fitness magazine a while ago – in the 1960s he was running a marathon in 2’10” and there were NO GPS devices back then.

What about heart rate monitors? Well, again they are useful if you are training in heart-rate zones, but the best runners in the world rarely have access to them and there is the tale of Brother Colm O’Connell, the iconic coach in Iten, Kenya, who has trained innumerable world class runners, including the current global superstar David Rudisha. He was given a gift of a heart rate monitor by Swedish scientists hoping to discover the secret of the Kenyan runners. Many, many years later, Brother Colm admitted that heart rate monitor strap was never taken out of the box! 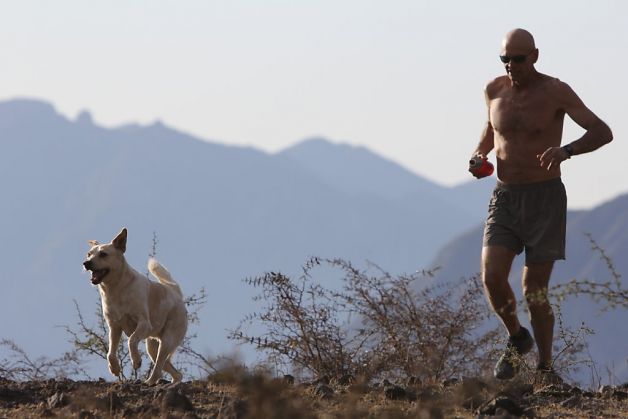 Shortly before his death, I met Caballo Blanco, one of the runners who shot to fame thanks to his prominence in Christopher McDougall’s book, Born To Run. Micah True as he was also known, and I talked about technology. He was working for Saucony at the time promoting their super-minimalist shoe, the Hattori. I mentioned that the shoe was unusual in the lack of technology that the manufacturer was claiming went in to its development. Micah fixed me with a steely gaze and told me that all the technology we needed had been developed straight into our bodies over millions of years. There wasn’t much to argue with there!

Should you run free?

The reality is that if you are due to run hard, it doesn’t really matter much what your heart rate monitor is telling you – as an athlete, you should be developing a sense of what it feels to run easy, steady, at threshold, hard and all-out. If you need a mini-computer to tell you what effort you are putting in, I think you might want to go back to basics and just run a bit more.

Please don’t get me wrong – I love a bit of data as much as the next person. I come back from every run and have a look at my old Polar and see how far I went and what the average pace was. If I have been doing intervals I check to see what the intervals were run at. But that is a mixture of curiosity and the desire to make sure that I am progressing. I don’t check pace or heart rate during a run – if it is supposed to be an easy run and it doesn’t feel easy, then I slow down, irrespective of the pace or my heart rate. Invariably, the end result is right.

So how about you? Do you love a bit of tech? Do you measure and analyse? Or are you a bit more freestyle? If you are into checking the parameters of everything you do, why is that and how does it help you become the best runner you can be? And if you don’t care for all the technology available, how do you measure progress and performance? Please tell me what works and what doesn’t work for you.