Since the invention of the ‘waffle’ shoe by Bill Bowerman, which was one of the things that catapulted Nike into becoming the behemoth that it is, I don’t know of many game-changing innovations in running shoe technology. Nike Air revolutionised running and other sports shoes. The development of super-strong lightweight fabrics changed the uppers of performance shoes for the better. But beyond that, there has been little more in the way of truly epoch defining developments.

So I am usually a bit skeptical when a brand tells me that they have invented the next game-changing development and one of the most recent is Nike’s Flyknit technology, where the upper of the shoe is woven as one piece, rather than made by sewing together panels of material (or overlays as they are known). I was interested, but would it be really revolutionary?

Well, I have to say that I think it is a great technology – for two reasons.

Nike has a pretty bad reputation when it comes to sustainability and environmental issues. For some reason the Swoosh has become associated, for many people, with sweatshops and dodgy practices. I am not sure why Nike has been so firmly labeled with this bad press, whilst other brands in the sector have dodged the bullet – it is probably down to the enormous reach that the brand has and it’s market-leader status in many areas. But it is definitely my experience that if you mention Nike to someone there is a good chance they will make some non-specific comment about sweatshops and child labour.

But with the Flyknit, if everything they tell me is true, they have found a way to produce a shoe that eliminates almost all of the waste that usually happens when you cut shapes out of pieces of fabric to sew into a shoe and throw the cut-off material away. The story that Nike tells is that at the end of the manufacturing process, they have woven an upper from a couple of spools of yarn and simply snip off the excess at the end.

Not only that, but on my recent trip to NikeTown London to have a closer look at the Flyknit Lunar1+, my guide there told me that in total the shoe contains 82% post-consumer recycled material.

So we have a shoe that creates a fraction of the waste of a normal shoe and the material used is, as far as possible, made from discarded plastic drinks bottles and recycled rubber.

Whilst it is fantastic that Nike have produced environmentally friendly product, they also need one that performs, because without that they won’t sell many shoes.

With the Flyknit I think Nike have developed something that really does aid performance, because I think weaving the upper is not just an alternative to the traditional way of making a running shoe, it is an improvement on it.

The first shoe that I had the opportunity to try out was the Nike Flyknit Racer. I really like Nike’s biggest rival’s racing flat – the Adidas Adios AdiZero and ever since my last pair of Nike Marathoners went to trainer heaven, I have not found a Nike racing shoe that I felt comfortable in. 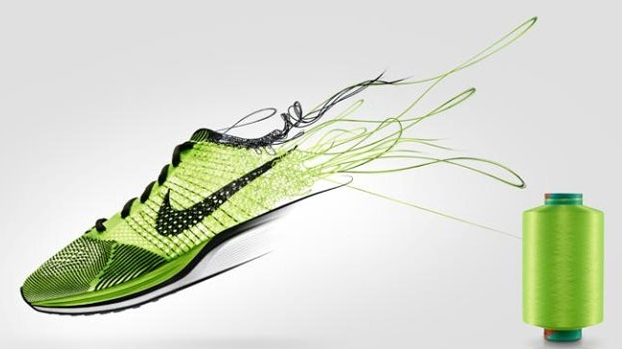 However the the Nike Flyknit Racer is a really good shoe for me. It is super-lightweight, thanks partly to the woven upper that simply contains far less material than a normal shoe.

The mid-sole is low to the ground in the front whilst also providing a good amount of cushioning, especially in the heel.

And the upper is amazingly comfortable. Pull the laces tight through the eyelets in the upper and the flywire loops that sit along the sides of the shoe and the feeling of security as the fabric wraps itself around your foot is second to none.

But could the feel be even better?

The Flyknit Lunar1+ and the steam machine

The second shoe in the Flyknit range that I have tried is the Nike Flyknit Lunar1+ and this time I was treated to the full fitting process by the Nike team.

I was invited to NikeTown London where a pair of this latest shoe was waiting for me. As I slipped them on, there was a similar feel to the Flyknit Racer. The Lunar1+ is definitely a more significant shoe and the sole is more cushioned, but the upper had the same feeling of flexibility and form-hugging as the Racer.

Kerry, the EKIN – a Nike expert who was there to tell me about the shoe – invited me to run on a treadmill  set up in the lobby of NikeTown to see how the shoe felt: the upper felt nicely fitted around the midfoot – thanks to the Flywires – and roomy in the toe-box. I thought it would make for a really well fitting shoe for high-mileage running.

Then I was invited to take the shoes off and they were put into a sci-fi looking box that injected stream onto the shoes. After 30 seconds in this shoe-sauna, they were given back to me, warm and damp, and I put them back on. You can see the steaming box here…

Suddenly the upper was not just conforming to my foot – it was embracing every bump and contour and all the differences between my two feet were starkly obvious. More impressively, once the shoe had cooled (about two to three minutes) there is only one way to describe the feeling – completely sock-like. 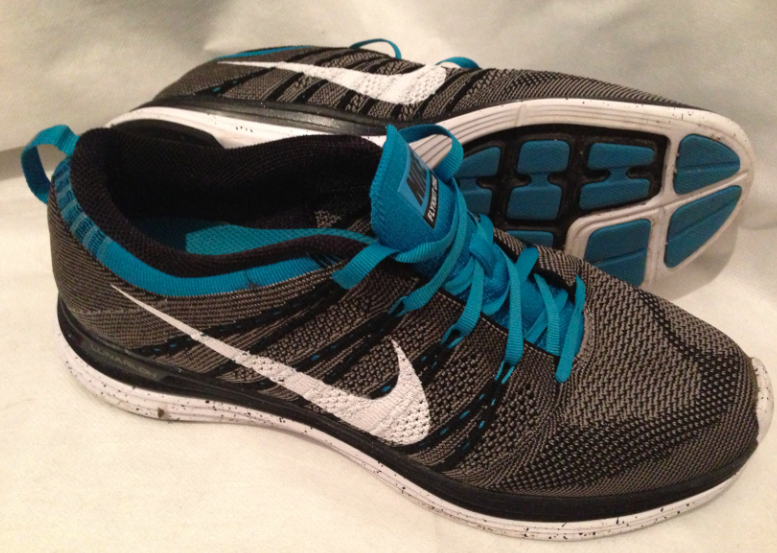 After the fitting at NikeTown, I took my new Flyknit Lunar1+ out for a run – a 60 minute tempo run. The shoes was as good on the road as it felt on the treadmill. The sole is certainly soft, but for high mileage I think that will suit many runners. It is not very bulky, so proprioception is not really compromised. But the main thing is the Flyknit upper – it really feels as though the shoe is bonded to your foot. There is no claustrophobia of the feet and heat is not a problem: it just feels as though the lightweight upper is holding the shoe gently but firmly in place. Just as it should be.

In conclusion, there are a few things that I really like about the Nike Flyknit range:

But don’t take my word for it, check out the guest review by Terry Stephens that you can find here…

A quick update – today I took my Flyknit Lunar1+ for a 19.7 mile outing. Averaging 7 min/mile with my training partner, I was really impressed with how good the shoe felt all the way through to the end.

The cushioning in the fore-foot was pretty much perfect for me, especially for the sections where we ran in tarmac or concrete (we try to run as much of my long slow runs on grass as possible) and the upper was super-comfortable: my feet were never too hot and the steamed upper fitted like a glove. The Lunar1+ is a light shoe and I really enjoyed that, especially when my training partner and I pushed the pace below 7 min/mile for the last 6 miles or so. All in all, the shoe performed wonderfully. Just a shame that such a nice looking shoe has got quite muddy – I may well wash ’em and go and get them re-steamed!