My friend and training partner, Terry Stephens, kindly offered to give me his thoughts on the new Nike Flyknit Racer recently. A sub-3 hour marathon runner, Terry trains and races hard, so he is the perfect man to put the fastest Flyknits through their paces. Over to you, Terry…

Flyknit is Nike’s current flagship innovation, and the technology that is starting to be rolled out across other models within their vast range. It’s fair to say that I was more than a little skeptical that this new technology was very much more a fashion statement rather than a breakthrough in sports apparel, so I was extremely keen to give these a try. 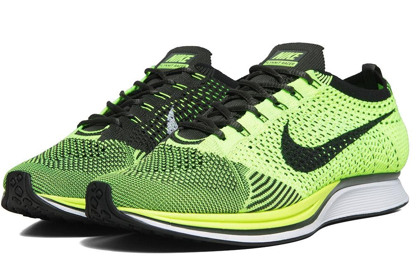 The sales pitch highlights weight reduction and increased breathability – two things which are pretty obvious when you take these things out of the box. The construction of the upper clearly offers the improved breathability but more impressive is how super light they are. At 160grams it’s definitely the lightest show I’ve ever run in, it also has the largest heel drop (approx 10mm) – thought that isn’t something that I found particularly noticeable when using them.

The sock-like fit is something that has been well documented in the shoes official PR (even offering a steam fitting service them in a few of their flagship stores), but what isn’t clear is whether designed to be worn sock-less – something of a personal preference I guess, but not something I’ve tried to date. After a bit of digging about online, I understand that they are designed to naturally mould to your foot after a period of use – the steam-fitting process Nike offer is an instant way of achieving this custom-fit straight out of the box.

Weight aside, the next thing that hit me was how narrow and seemingly firm they are.

For these reasons I’d presumed that they’d be a predominantly track-based shoe for me with the possibility of a few 5k races thrown in. I wanted to test them out over a number of different sessions to give a rounded review of their performance so I trained in them for a few weeks across a variety of distances and surfaces.

As suspected they felt perfect for track. Great grip (even in the icy/snowy conditions we’ve had recently) and the firm ride felt fine on the track surface. The biggest surprise came on a longer run after having worn them a few times, an 8-mile tempo run on the road. After the first 20mins the shoes started to feel really responsive, helping to give me an extra spring in my stride along the embankment. Not sure if this was a sign of them beginning to mould to my feet, but I began to understand some of the comments that have been made about it feeling like you’re not wearing any shoes. The single piece upper offered enough support for me and certainly didn’t make me feel vulnerable to excessive pronation.

It was this last  tempo session which left me thinking about the idea use and distance for these shoes. I know plenty of people that have, and still are, running full marathons in them, but for me the half marathon feels like the optimum distance. As beautifully light as they are I need a little more stability when my form begins to dip a little in the final third of the 26.2 miles.

I’m a big fan of the LunarSpider LT – they’ve been my footwear choice for all races under the marathon distance for the best part of 2 years. I see the Flyknit Racer as a rival for that mantle, although they’re obviously a lot lighter (-40grams), they share a similar level of heel drop (+2mm) and the fit is fairly comparable too. Ironically (given the super lightweight nature of the upper) I’d expect the Flyknits to be a little more resistant to wear, which hopefully will start to counteract the large price deficit between the two shoes.

In summary, for me the Flyknit Racer is a great (if not expensive) option for races up to the 13mile mark. The price will no doubt play a big factor in how successful they are, but I’d also like to think as the technology continues to grow the £150 price tag will start to creep down (they’ve already dropped to £130 since I began testing this pair).

Coming soon to my feet… the Nike Pegasus 31

I have just heard from Nike that they are unleashing

I once heard someone say that the Nike Free is