One of the things I love about running is that at it’s heart is a purity that doesn’t exist in many other sports. There is not much that is contrived about trying to get from one place to another as fast as you can. There are no balls, or rackets, or off-side regulations. There are hardly even any rules (except follow the prescribed route). Somehow running is about something that human beings have had to do to survive since the dawn of our species.

However under the broad umbrella of running as a sport, there are myriad different events – from track sprinting to ultra-distance trail races and from elite events such as the Olympics to mass participation events such as big city marathons and ParkRuns. When I started running, the easiest form of running – and the one that appealed to my sense of wanting to take control – was road running. But as my interest in running developed, I discovered other types of races and one book, above all, gave me the impetus to take my running off-road. That book was Feet In The Clouds: A Tale Of Fell Running And Obsession, by Richard Askwith. 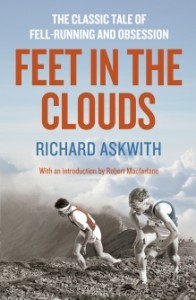 Askwith is an accomplished writer, currently employed as the Associate Editor of the Independent and this, along with his determination and dedication to become the best fell runner he can be, makes Feet In The Clouds a wonderful read.

Much like Open, the autobiography of Andre Agassi, Askwith’s book opens with a chapter that simply grabs you by the throat and doesn’t let go. You are immediately sucked into a world where physical exertion, doubt, fear, ecstasy, history and camaradery are all an integral part of why its participants are involved. If, like me, you are interested in what you are capable of, Feet In The Clouds is a very direct challenge: could you? Would you? Should you try any of this at home (or on a hill near to home)?

What is also wonderful about Feet In The Clouds, is the way that Askwith tells of his considerable personal challenges and exertions within the context of a sport that has its fair share of heroes and heroics. This tends to do Richard the disservice of diminishing what he himself achieved. But it also paints a vivid picture of a minority sport within the wider sport of running, which has quietly and unassumingly carried on for generations (although sadly, more recently perhaps, waned more than waxed). Richard writes about and indeed meets many of the unsung heroes of fell running like Joss Naylor, Pete Bland and Angela Mudge who work tough jobs and race tougher races.

In that sense, the great fell runners that Richard describes are like many of my heroes from the golden age of road running like Bill Adcocks, Steve Jones, Mike McLeod and too many others to mention: men who worked five or six days as well as running 120 miles each week and completed marathons in times that should make today’s pampered professional runners blush.

If you need any more convincing that this is tough sport, how about this for a race course!

If there is any slight criticism of Feet In The Clouds, it is the forensic level of detail that Askwith brings to bear on his chosen sport. Every so often there is a  chapter which is a look at a month of fell running and that is perhaps too much detail for the casual reader.

But then again, fell running is not a sport that is for anyone casual in any sense. The epic races, reckless down-hill charges, hard lifestyles and deep community that makes up fell running is not for the faint-hearted and whilst some people might not understand the significance of a race up and down Scarfell Pike or Snowdon or the challenge that the Bob Graham Round represents, that in no way diminishes what amazing feats the characters in Feet In The Clouds achieve (the author included) and a re-issue of this book is the perfect antidote to the Olympic legacy of multi-million pound sponsorship deals, Olympic stadia and corporate endorsements. This is a book about getting out there and doing it.

So I really recommend that you get a copy… then lace up your fell shoes and go and get out on the hills. It won’t be long before Richard Askwith’s tale of obsession becomes your tale of obsession – just don’t say I didn’t warn you!

The good people at Aurum have sent me a copy of Feet In The Clouds to give away, so head over to the freestak Facebook page for a chance to win the book.