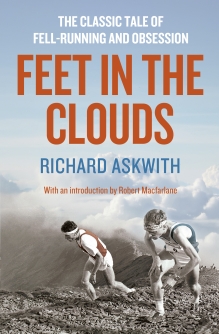 You may have recently seen my review of Richard Askwith’s book about fell running, Feet In The Clouds, which is being re-released by Aurum Publishing. A classic text that I have probably read half a dozen times, you can read my review here.

In addition to sending me a copy of the book, which you can win here, Richard also kindly offered me the opportunity to ask him a few questions about fell running, his experience and the response of the fell running community to the book. Here is what Richard told me:

What do you think are the attributes that the best fell runners possess and can a ‘normal’ runner acquire them?

The single most important attribute is toughness: physical, mental – everything from courage to the ability to shrug off incidental pain. Some people seem to start off with a lot more of this than the rest of us, but I think you can acquire it, if you want to. Apart from that, you need to be superfit: aerobically, anaerobically, in terms of strength, in terms of agility and in terms of stamina, with the kind of natural athleticism that allows you to handle very high speeds on the descents. It clearly helps if you weigh next to nothing: I’ve never seen a top fell-runner carrying an ounce of extra fat – although we middle-of-the-packers sometimes to get away with it. Finally, but not least, you need to be at home in the mountains. This gives those who were born and bred in the fells a major advantage over those who grew up in cities. But if you really want to become a mountain person, you can: you just have to arrange your life so that you can spend lots of time in and on the fells. It’s a bit mad, I suppose. But I think it’s worth it.

What was the hardest part of writing the book? And what were the highlights?

Deciding what to leave out: there were so many people and achievements and places that cried out to be written about, and I simply didn’t have the space. It was also quite tricky to get into a state of mind where I could describe to non-fell-runners what fell-running is like. Part of the secret of getting better at fell-running is that you have to let it become second nature, so that you simply stop thinking about the discomforts and the dangers and just get on with it. But you can’t really write a book just by saying “It’s no big deal.” So I had to think my way back into earlier states of mind, when I was really aware of all the difficulties.As for the highlights: the best bit, without question, was the people. There were so many different people who helped me, in different parts of Britain (and beyond), of different ages and from different backgrounds, each of whom had their own special insight into this wonderful sport that most people in the country had simply never heard of – and every single one of them responded to my requests for help with enthusiasm and generosity. They gave me time, information, tips, introductions, quotes, archival material: it was as if there was a kind of collective will that a book about fell-running should be written. I don’t know if they were all expecting the kind of book that I wrote, but I hope that not too many of them were disappointed.

How did the fell running community react to the publication of Feet in the Clouds?

They were very kind. I don’t suppose the book was to everyone’s taste, but generally people seemed glad that I’d tried to capture the best of their sport in print. More recently, some people have expressed concern that the book’s success has encouraged excessive numbers of ill-prepared novices to give the sport a try, putting themselves and others at risk and damaging the environment and atmosphere at some of the most popular races. I do worry about this, although I don’t think the surge in interest in off-road running in recent years is exclusively related to Feet in the Clouds. But I think that really feckless novices tend to be discouraged pretty quickly by the discomforts of fell –running, and I hope that most people are bright enough to understand that, if you’re going to come into a sport like this, you have to show a bit of respect: for the mountains, and also for the people who live and run in them.

As a fell runner, how do you view the growth of ‘trail running’ as a sport distinct from fell running?

What is the hardest run you have ever done?

I’m not sure I can answer that question. There seem to be so many contenders. My first Ben Nevis race. My second Ben Nevis race. My first attempt at the Bob Graham round. My second attempt…  My first Grasmere. My first Three Peaks. They all seem impossibly hard, in retrospect. I suspect that the worst of all my have been my very first attempt at fell-running, when I ended up covering the final couple of miles by a mixture of crawling and wriggling on my bottom. But perhaps the real answer is that, with fell running, if it doesn’t feel like the hardest run you’ve ever done, you’re not trying hard enough.

What would be the best advice you can think of for aspiring fell runners?

You need to be fit. You need to be tough mentally: this isn’t a sport for whingers. If you’re not used to running on rough, steep ground, give yourself plenty of time to master it: downhill technique is more than half the battle. Start with smaller races and work your way up from there. It’s easy to bite off more than you can chew if you aim too high, too soon. Above all, find out about the sport before you try it. Get your head around the idea that mountains are dangerous, and that you need to take responsibility for your well-being. Learn how to use a map and a compass, get some basic outdoor survival kit, and accept that this isn’t a sport where you can just assume that someone else will make sure that you have a pleasant, trouble-free leisure experience. But if you can take all that on-board, give it a go. Show a little humility, responsibility and respect, and you’ll find the fell-running community incredibly supportive and welcoming. And you’ll probably have the most rewarding time of your sporting life…

My thanks go to Richard for taking the time from his busy schedule to answer all my questions. I really think that Feet In The Clouds is a great book and if you haven’t already read it, try to win one here or order a copy – I am sure you will not be disappointed.

The good people at Aurum have sent me a copy of Feet In The Clouds to give away, so head over to the freestak Facebook page for a chance to win the book.

Tags: Feet In The Clouds

One of the things I love about running is that