I have long been a fan of inov-8. And not just the shoes, though it is worth saying that I think their shoes are ace and since I tried on a pair of the Road-X 233s I realised how much more there is to the inov-8 range than just trail shoes. But also what I perceive to be the philosophy of the company. I like the ‘challenger’ attitude that the company started with and the way that innovation (see what I did there) is at the heart of what they do.

So I was absolutely chuffed when Lee Proctor, from their marketing team, got in touch and asked me if I’d like to review some of their products. I was even more chuffed when, on discovering that inov-8 were taking their newly formed international trail running team to Chamonix for a training retreat and a chance to tackle a couple of iconic races out there, I was invited to come and meet the team at their chalet. I jumped at the chance.

To provide some background to my meeting an international team of top quality trail runners, it is worth taking a moment to reflect on the history of inov-8, which is 10 years old this year.

The company was founded by Zimbabwean Wayne Edy, who had been working for some time as a consultant to the outdoors industry. Based in County Durham, Wayne decided that there was a gap in the off-road running shoe market which at the time was dominated by Walsh.

Wayne was advised against heading into muddy territory, but persisted by designing and manufacturing the first inov-8 shoe: the mudroc 290, ordering 2,500 pairs from China. With a house full of pairs of shoes, Wayne started calling retailers and trying to drum up orders for his shoe. As good timing and luck would have it, Wayne was the right man, with the right product in the right place at the right time and the notoriously close-knit off-road and fell-running communities started to talk about his shoes – word spread and sales grew.

The story of inov-8 is one that shows how important a great product, along with a charismatic team and a strong philosophy is. Soon Edy had done a deal with the most influential retailer in the UK fell running scene: Pete Bland Sports. And from there, as demand for the new inov-8 shoes grew amongst runners, the retailers became more and more receptive.

Melissa Moon and the mudroc 290

In 2003, the year that inov-8 launched, a runner by the name of Melissa Moon was training hard for the World Mountain Running Trophy in Gridwood, Alaska.

Melissa has travelled to Gridwood in advance of the big race to train on the route that the race would take. She had given herself eight days to get familiar with the course. Nothing was left to chance in her preparations and as Melissa knew that it hadn’t snowed during the summer in this part of the USA for the last 15 years she had the right racing flats for the day.

Shockingly, on the day of the race the assembled athletes awoke to find a blanket of fresh snow all over the course! Luckily for Melissa the English team came to the rescue and offered to lend her a pair of inov-8s. As you will probably have guessed, the shoes were perfect and Melissa went on to win the race and the World Champion’s crown. It was perfect PR for inov-8 and kicked the brand into the limelight.

The story since then

Since hard work and a little bit of luck both played a part in helping to make inov-8 a worldwide force in off-road running, the company has expanded to create products for a range of committed athletes. There is not an extensive road-running shoe range as well as shoes designed specifically for ‘functional fitness’ athletes (cross-fit crazies as I like to call them).

And inov-8 has a range of running apparel and accessories to go with the shoes it produces.
You can check out the entire range of products on the inov-8 website here.

The latest chapter in the inov-8 story, at least as far as trail running goes, is the creation of an international team of trail runners, who came together in the last few weeks and travelled to France to a chalet near Chamonix, for a week of bonding, training, learning, product testing and racing. And I was lucky enough to get to meet up with them… 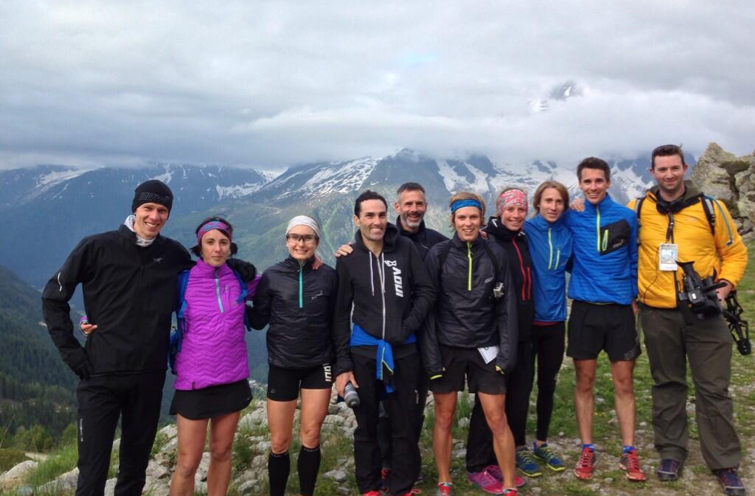 The members of the inov-8 team in Chamonix included:

Brendan Davies from Australia – recently the winner of TNF 100km in his native Australia after a magnificent 5th place in the 100 mile Ultra Trail Mount Fuji, Brendan is a really lovely chap and a teacher to boot! Check out more here.

Shona Stephenson (also from Australia) was third in TNF 100km recently and won her first 100 miler: the Northburn 100

Alex Nichols is from the United States of America and races anything from 5km to 50 miles.

Scott Dunlap, also from the US, is a full-time executive and masters athlete who manages to boss the trails as well as training for and competing in triathlons. Busy chap! Check out his biog here.

Oli Johnson is the first of a clutch of home-grown UK athletes running for inov-8, with a particular appetite for fell running and orienteering. Check out his blog here.

Robbie Simpson is a Scottish athlete competing for inov-8 and a big fan of technical routes in trail races.

Ben Abdelnoor seems to have an affinity with the stranger races available and is also stepping up in distance this year. It will be interesting to see what he can do, especially in the 50 mile races he has planned.

Anna Lupton is a fan of the Three Peaks race and has competed at the World Long Distance champs, so she is no stranger to the sorts of longer races that are so popular in the Alps. Check her out here.

Sarah Ridgway is the last of the UK athletes who joined the team in Chamonix. I have saved her for last because I really love her blog and there is a wonderful video of her that is well worth checking out, here.

Florian Reichert is the only German athlete on the team to come to Chamonix, Florian (known as Flow) is another teacher and he runs for Arc’teryx as well as inov-8.

When I met the team, they had only just come together and were all nervously anticipating a weekend which would test them all the the limit – for many of them, they were hoping to take on the Kilometre Vertical on the Friday and the Mont Blanc Marathon on the Sunday. And they were all going to race it!

I was shown around the chalet that the team were staying in by Lee Proctor from inov-8’s marketing team and then invited to stay for lunch as I heard the athletes plan their races, talk about their favourite inov-8 products and share their recent racing stories.

While I was with the inov-8 team, the sense of excitement at being in Chamonix, surrounded by the mountains, was palpable. In fact I heard that the two Australian athletes had arrived at the chalet in the dark after a flight around the world and were still excited enough to want to go for a run with their head-torches on!

I was also really happy to be given some inov-8 shoes to try out. The first was F-lite 262 and I was given a pair of the Trail Roc 235. It was great to have not only Lee’s thoughts on the shoes along with inov-8’s official line, but I was also able to discuss the shoes and the best distances and conditions in which to use them with the elite athletes who use them day to day. Along with the Roc Lite 315’s that I have with me in Chamonix, there will be product reviews on here in the next few days.

For now let me say that I have tried all the shoes and love them all. In order of weight and substance…

The Roc Lite 315s are amazingly stable, grippy and almost seem to be a bit water-resistant, so great for long days out on the trail, racing over rocks and roots, hiking up inclines and splashing through the streams that wash down the mountain sides.

The F-lite 262 have an amazingly comfortable upper – almost sock-like – with a grippy and cushioned sole. These could become my favourite trail shoe for shorter races up to 40km or so. They also look great in my opinion!

The Trail Roc 235 is similar in feel to the F-lite 262, but the three different materials used in the out-sole make this a super-grippy shoe and I will be interested to try this in a variety of races, possibly even some cross-country races when the season starts back in the UK this autumn.

So I would like to say thanks to the inov-8 team for making me feel so welcome and for the shoes to test. There are some very exciting things happening at inov-8. While I was there, one of the team, Matt Brown, showed me some prototype elite kit that looks utterly amazing, while Lee and most of the team paraded around in a two-way half-zip duvet jacket that is immediately on my ‘most coveted bit of kit’ list (yes, I do have one of those!)

Along with the quality of athletes that Lee and his colleague Natalie have brought together – three in the top ten of the Mont Blanc Marathon, by the way – the new products and the way that the people at inov-8 are treating trail running, means that this young company, with modest roots in the UK, could go on to become a powerhouse in trail running, taking on the more established ‘mountain brands’ from the Alpine countries and beating them at their own game. It’s certainly going to be interesting watching what happens next…