If someone asked me if I wanted to get involved in a 24-hour relay race, where I would be pushing my physical limits as far as I dared, with a group of complete strangers, miles from home, where I would be camping – but not sleeping – for a couple of days during which we would experience searing heat that baked the ground rock-hard and then a night of torrential rain and thunderstorms which would turn the ground into a quagmire, with mud thigh-deep in places, I would have rather politely (or more likely rather firmly) said “No!”

But that is exactly what I did this weekend as a guest of adidas at their adidas Thunder Run at Catton Park, just north of Birmingham. It was one of the most fun, most bonkers, most exhausting and most life-affirming things I have ever done! 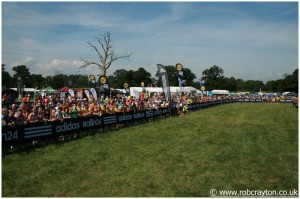 The whole shebang started off about three weeks ago, when I was contacted by Speed Communications about whether I would like to be part of a team of journalist, writers and bloggers, at a 24 hour relay race that adidas sponsors. My instant reaction was that it sounded like a lot of fun and I was definitely up for the challenge.

We were to be kitted out before the race with shoes, a jacket, shorts and a couple of t-shirts, although sadly my trail shoes arrived in the wrong size and with too little time to replace them before the race (more on that later). On Friday afternoon, the team would travel to the race location where upon we would try to run as many 10km loops as possible between midday on Saturday and midday on Sunday.

On the team, along with me and Mrs. Freeman, would be:

• Kieran Alger from T3 magazine (who is a friend of mine)

• Adam Purser who would be representing the excellent Run247

On Friday afternoon, most of the team (except Sam and Kieran) met at the adidas offices in Covent Garden along with another of the Speed Team, Ciaran Pillay and eight other runners who made up a second adidas team. As none of us knew each other, we all made introductions and there seemed to me to be an immediate warmth and enthusiasm about everyone that augured really well for the weekend.

After a fairly long drive, including a service station stop for something to eat, we arrived in Catton Park, where the race was being held, in the pitch dark. One thing was obvious, though: this was a big event. There were fields and fields of tents, a big canvas race village and even some camp fires burning away.

Thankfully the adidas team had reserved an area for us close to the start finish line and within a short while we all had our tents up and were ready to get some sleep. Little did we know how the calm, controlled Friday evening, would be such a different experience to the race itself.

We had agreed with the Speed team to meet at 9:30am to run through everything and have some breakfast before the race started at midday. adidas had been great and really sorted us out: we had a pass which meant anything from the catering tent was free, we were given kit – a race t-shirt, buff – and in my case I was given a pair of the adiZero XT shoes, in a very bright yellow (but not for long!) because the trail shoes that I was originally sent were too small.

I was delighted – I love the adiZero range and for 10km legs, they would be ideal. The Speed Team had also brought along Maxifuel energy products and recovery drinks for everyone, which was a lovely thing to do, although I didn’t partake of any of the energy stuff and only drank a couple of the recovery drinks, because Ciaran from Speed has one made up for each person as they crossed the finish line. That was much easier than tramping all the way back to the tent in the rain for my own TORQ recovery powder that I had brought with me.

In the couple of weeks leading up to the race the team had been in contact about tactics. Only one of us had experience of a race like this before and whilst there was no doubt that we had some pretty useful runners on the team, getting the tactics wrong – or indeed not having any – would have probably made for a crappy weekend.

So Tobias ended up suggesting the same idea that I had and we all agreed on that – a pairing system that would see two people in our team alternating one 10km lap each for four laps between them and then having around 10 hours to rest, eat, sleep and recover for another double-lap session later in the race.

The course and conditions

As mentioned, the course was 10km long and runners had to complete a full lap before handing over to their team mate in the relay. It was the hilliest, twistiest and most off-road course imaginable, which was tough enough when the sun was beating down and the ground was baked as hard as marble.

But then the rain came! It had been predicted and it arrived just on time. A torrential downpour with huge lightening bolts and thunder that crashed and roared as the darkness set in. It was going to be a long night.

The impact of the rain was pretty instant. Almost as soon as it started, the runners comng back from their laps were beginning to get covered in mud. From the extremes of the roasting conditions we had from the start of the race, this was quite a challenge.

The twisty course, now became a quagmire. There were muddy puddles of slurry-like water which were thigh deep. The sides of the trails became soft and loose, offering no grip at all. The tree roots disappeared under a slick of dark mud. Athletes came back to the start/finish line, covered in the stuff. I had mud up the entire length of my legs, in my shorts, up my back and in my hair and ears.

As the race developed and the teams spread out a little, we started to really work well together. Appointed team manager, Ciaran from Speed, was at almost every handover where one runners came in and handed the baton (actually a wrist band) to the next runner. Ciaran would hand the incoming runner a towel and a recovery shake and noted down their time. It was like clockwork.

The rain was predicted and so no real surprise, but it did add significantly to how difficult the course became and my hat is most definitely off to the runners who tackled the course between 11pm on Saturday and 3am on Sunday when the rain was really torrential.

I had a double shift on Saturday afternoon and made the most of dry conditions to really push myself to gain time for the team. I then had 2 hours sleep between 11pm Saturday and 1am Sunday, with my next run at 3:30am and my final 10km at 5am, but which time the rain had stopped, the sun had come up and the warmth of the day was turning gallons of mud into a brown, churned up glue that made running so hard it wasn’t funny!

There are two results to report. The race result – we came 7th in our category of mixed team of 8. I think that is an amazing feat from all the 8 runners and is testament to the fact that we had a runner on the course for the entire 24 hours without a break. Other teams stopped for a couple of hours in the middle of the night and that is where I believe we stole a march on them.

But there was also another result – the fantastic camaraderie and incredible spirit of our team.  Remember that of the eight, I only knew two (one was my wife!) and for the others, they didn’t know anyone on the team at all. And yet, in the middle of the night, when we were cold, very, very wet, tired and covered in mud, everyone was up for their next 10km lap or were simply hanging around encouraging the runners on the course on. There was amazing genuine enthusiasm and unfailing positivity. As Charles wrote to the team today:

Everyone in the team was so positive. Conditions were awful and everyone in the team had their own extra challenges (battery failure, shoe choice etc), but everyone was ready for a smile at all times and to encourage each other. You might think this was due to the type of people races like this attract, but I talked to some other people during the event and lots of them were really miserable. Even the solo winner said it wasn’t any fun. What made the event for me was being with the perfect group of people who were prepared to see the fun side of any adversity.

I could not agree more.

As for kit, I will be updating the site with a review of the adidas adios XTs in due course, but for now suffice it to say, they were great in the dry and the dust of the early part of the race and equally up for the challenge of the flooded, muddy bog that the course became later on. Light, grippy and comfortable, I will definitely be using these again (well not this pair – they were lent to another member of the team and I don’t expect them back – but I will hopefully have another pair soon enough). I will also hopefully have a chance to try the adidas adiStar Ravens which were the shoes we were supposed to have for the race and I’ll post a review of them as soon as I can.

For now, I would like to say a massive thanks to adidas and the Speed team for an amazing opportunity and for the efforts they went to,  making the event run smoothly. My legs ache, my elbow is bruised black from the tumble I took on my second lap and my feet are stained from all the mud that was in my shoes. But I met amazing people and made connections that will hopefully become good friends. I also discovered a new side to running. And if it is a testament to how good the event was, I am already thinking about tactics for next year… who’s all in 24 with me?