I think that to a greater or lesser extent, all runners are creatures of habit and that is never truer than when it comes to our choice of footwear. The advice from experts and non-experts alike is often: find what works for you and then stick with it.

I have friends who find a shoe that they like and buy as many pairs as they can afford or justify – indeed at my club the demise of the ASICS Ohana resulted in panic buying the likes of which is only seen after the announcement of an impending tornado somewhere in the USA.

Other friends, including some highly regarded reviewers, wail and lament when a shoe that they like is discontinued or even just changed a little, as though the business decision about the shoe was a personal attack on them!

I have my favourites too

And I can sometimes see why. Whilst I do tend to look down on runners who put any success they achieve down to lucky pants or the fact that they have had the same vest since 1962, I do tend to get used to a pair of shoes and not really want to change.

When the original adidas adiZero Adios came out, all the faster runners at my club got a pair. I wanted a pair. They were too narrow for my Hobbit like plates of meat. I was gutted. Not only did they look cool but all the fastest people in the world were wearing them. Probably more importantly, the fastest people in my club and on the start lines of races I was running were wearing them.

In search of the perfect racing shoe

But I wasn’t able to join in the fun, so I kept looking for my ideal racing flat. I tried the Brooks T7 Racer and I liked them – but they were a little too flat for me. I went back to ASICS and raced in the Gel Hyperspeed but for the marathon they didn’t offer enough in the way of cushioning for me. The Mizuno Wave Ronin was a favourite for quite a while.

But then I heard a wonderful thing – there would be a range of adiZero Adios Wide… a troll-feet special! So I went to the adidas store on Oxford Street and there they were. The shoe I had been waiting for. I went crazy and bought two pairs in one go, because my man on the inside at adidas told me that the supply would be limited.

And so there I was, at the end of the Olympic year in London, training and racing in my new Adios Wides and dreaming of the London marathon in April 2013. What I would do in my new, light, responsive, comfortable movers. Then I found myself in New York, invited to the launch of the adidas Boost. Moreover I found myself sitting next to the man in charge of running at adidas for Europe. And he told me that if I liked the Boost (I did and still do) and the adiZero Adios (I did and I still do), then I would love the Adios Boost…

If Carlsberg made running shoes

WHAT!?!!?? All the things I love about the Adios – the perfect heel-toe offset, the light weight, the open-mesh upper – but with a Boost sole? I was really keen to get a pair on my feet.

Well now I have and I can report that unlike so many combinations that sound alright on paper but are a disaster in reality, the adidas Adios Boost is a triumph.

The shoe is everything that I loved about the adiZero Adios but with a firmer and more responsive feeling midsole. The shoe has the Continental rubber that certainly makes the shoe feel more grippy and if anything seems to have an even more open upper which keeps my feet lovely and aerated. 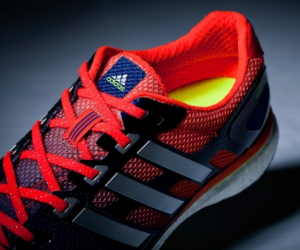 If I have one tiny criticism, it is that if I am not very careful, the tongue, being really light, can roll at the edges and then there is a gap either side which allows the laces to rub against the top of the foot. But careful tongue placement (oh er missus) sorts that out.

In the races and sessions I have done so far in these shoes, they have felt great and that is despite there not being – as far as I know – a ‘wide’ version. I suspect that the new shoe is a little wider than the earlier adiZero Adios, which is great for me and the open mesh upper is probably also a little more forgiving. It probably also helps that these shoes are so striking looking.

For me, I think that adidas have done a great thing bringing their Boost technology and the design of the Adios together. I have sometimes thought that adidas has perhaps too wide a range of racing shoes and if they were to ask my opinion, I would say that they could do away with all the others and concentrate entirely on the Adios Boost. But then if they did, that would probably send me on a panic buying spree in case they sold out and I can not afford that, so adidas if you are reading this, please make sure you save a few pairs just for me… danke!