Mention TomTom to most people and they will know this as the brand behind the in-car satnav, beloved of drivers from the easily bewildered to taxi drivers who know longer have the knowledge that they used to. In fact so synonymous is TomTom with that market, that this brand has almost assumed the status that Hoover has in the vacuum cleaner market – it is a byword for the product rather than a brand name.

But TomTom is much more diverse than just the in-car products that grace a billion windscreens.  TomTom has products for road users as diverse as campers, caravaners, truck drivers and motorcyclists. And for some time now, TomTom has been the driving force (pun intended) behind Nike’s Sportwatch – a great example of two brands collaborating in areas that they specilaise in, to bring a great product to market.

In a rather unexpected twist, however, TomTom has decided to go it alone and launch its own range of watches… the aptly named TomTom Runner and it’s sister watch, the TomTom Multi-Sport.

Taking on a busy market

TomTom have decided to launch a product into a busy market – GPS devices are really ubiquitous now and I really only know a couple of runners who don’t own at least a basic one.

I suppose that TomTom thinks that they already have the technology and through their association with Nike, have already established that there is a market ready and willing to spend money. But it still makes me wonder why any company would launch into such a competitive environment.

The challenge for TomTom will be to see if these two new products can create a space in the running and multi-sport sector for their products. There are already quite a few brands trying to own the budget end of things including Soleus, who have a watch that has overcome many of the criticisms that were leveled at it initially. There are budget offerings from Garmin and Polar, who are both working hard to assert their “we were here first” dominance on the market. And at the cheaper end of things, you also have to take into account the Nike SportWatch GPS which at £129 for the basic version, is a great bit of kit for the money (and a little confusingly still says that it features TomTom technology interestingly and is still for sale on the TomTom website).

At the more premium end of the market Suunto will relieve you of a little over £400 for a watch that will record everything you can possibly imagine in a unit with a 50 hour battery life. And with the Garmin Forerunner 910XT, you have a £360 watch which they claim “is the only all-in-one, GPS-enabled device that provides detailed swim metrics and tracks distance, pace, elevation and heart rate for running and cycling”

So where will the TomTom Runner or MultiSport fit in?

The differences and benefits

Having tried the watch, I think this is firmly aimed at the mainstream runner and triathlete: someone looking to understand their training, but perhaps not obsessing about every tiny detail. TomTom tell me that they are looking to an audience of ‘challenger athletes’ to buy this watch. So what is a ‘challenger athlete’? Well TomTom think they are the type of runner or multi-sport participant who:

When it came to trying out the unit, I had the opportunity to use the watch at an event in Battersea Park, running with none other than GB Ultra Runner Robbie Britton, who despite his predilection for long races (he won the North Downs Way 100 and the South Downs Way 100 this year) has a wicked turn of speed when it comes to a 200m sprint!

We were issued with a watch and set off for a run. The first thing that I noticed, was how light and thin the watch is, compared to my Suunto Ambit. The unit is kept super-thin, by moving all the controls onto the wrist, making for a longer, thinner unit than many other watches manage.

The team at the event had set the watch with a sample ‘workout’ – in our case a 2km run. This allowed us to try out one of the features that the TomTom team really seem to think will be popular – the ‘Goal’ feature, where you have a visual and physical (more on that in a minute) prompt every so often, telling you how far you are through the workout.

Actually I am not sure I like this function all that much: I love running and having something tell me that I am 25% or 50% of the way through my run, feels a bit too restrictive – what if I feel great and just want to run a bit further? But I guess if you are the type of runner who just wants to get the session done, it could be motivating to know that you have a good proportion behind you. And of course, if like me you don’t care how much of your pre-planned run has been done, you simply don’t use this function. 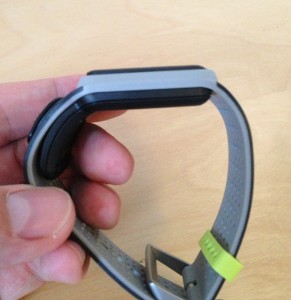 What I did like, that I discovered when using the Goal feature on the watch, is the vibrate mode. So at 1km into our 2km run, the whole unit vibrated, just like a mobile phone on silent, to let you know that you have reached a certain point. In situations where you want to know that you have passed a mile or something like that, the vibration function is, in my opinion, brilliant.

The other thing that I really like about the TomTom Runner, is that the watch unit comes out of the strap. This has a few benefits in my opinion:

Since the event at Battersea Park I have played with the watch quite a bit and I have to say that it has continued to impress me. The display is really easy to read, with a white-on-black read-out that seems to cope with most light conditions. The four-way toggle controller that sits on the wrist is easy to use and the GPS fix is as fast as anything I have used before.

The 10 hour battery life that TomTom claims, seems to be a bit pessimistic after I left the unit running in its box overnight and I suspect that, initially at least, you can get more out of it than 10 hours. The charging cradle is really easy to use, although you do have to remove the unit from the strap to connect it (a minor inconvenience) and I have been told – though I have not been able to verify this myself yet – that the data can easily be extracted to most of the online platforms that you are likely to want to share your stats with.

So all in all I have to say that I quite like the TomTom Runner. I think that it is a very neat and lightweight watch, with really simple and intuitive navigation and some clever design ideas built in. Whether the world needs another GPS device is questionable, but I think that if you are after a watch that will give you all the stats and functionality that you need if you fit into the Challenger category that TomTom have identified, then this watch is well worth looking at.

You can find more details on www.tomtom.com and pre-order one of these watches for £150.

If you do buy one, please let me know what you think.