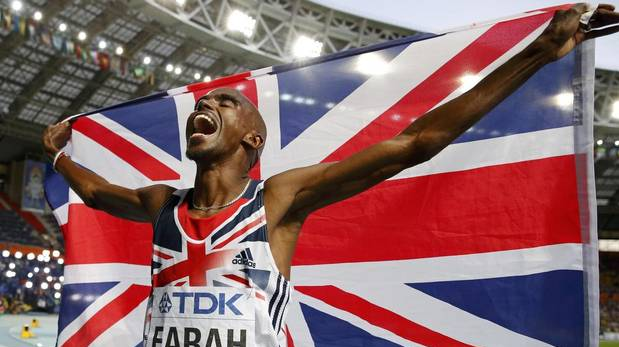 I don’t have a huge amount to add to what will certainly be an avalanche of superlatives as sports writers throughout the UK and almost certainly the world, try to explain what Mohammed Farah has actually done by winning the IAAF World Championships 5000m race this evening. I certainly don’t have the words to do his achievements justice.

From a personal perspective, however, I am so incredibly happy that we have a man like Mo racing under the flag of the UK for Team GB. I was only just aware of the significance of what English runners were doing when Coe, Ovett and Cram were taking it to the world and winning time and time and time again. But as an avid fan of the history and lore of running (not the book, although the book is pretty good!) I have often felt pangs of jealousy.

I go to see live music – especially jazz – with my wife and yet I doubt I will ever say that I saw the next Miles Davis or John Coltrane before they were famous. I love photography, but I don’t think I will ever see an exhibition and know that I have seen something special in the work of a young photographer. And I never thought that I would see English athletics be able to claim a real, global superstar as it’s own again. Mo Farah has dealt with that. I have witnessed true greatness, met him in the flesh, watched one of the most important moments in his career live and in person. I have met a living legend…

One memory that I will treasure for life, is the night I spent in the Olympic stadium in London on Super Saturday when Jessica Ennis emphatically justified all the hype and proved that her tag of face of the Games was entirely justified. I was sitting a few rows back from the sand pit as Greg Rutherford literally flew through the air to a gold medal. And I screamed myself hoarse as Mo ran lap after graceful lap at an impossibly fast speed to win the 10,000m Olympic titles.

A few months later, thanks to Nike, I had met Mo in person and interviewed him for this blog. He was utterly charming, modest, enthusiastic and excited beyond words by, it seemed, almost everything. I asked him about the Olympics and he was realistic, confident and most of all, modest about his chances. I couldn’t have guessed what he would achieve so soon afterwards.

Like so many other people I was delighted when Mo won his two Olympic titles, but to be honest, in that stadium, at that time, it felt as though anything was possible. Almost as though the impossible was somehow predestined for those GB athletes brave enough to believe in themselves and the power of magic.

A Championships too far?

But Moscow? A year later? Having spent so much time fulfilling media and sponsorship obligations and with the gnawing feeling of hunger blunted by a belly full of gold medals, and Olympic ones at that? I would not have been surprised if the IAAF World Championships proved too much too soon, not least since Mo was now carrying a massive target on his back.

Tonight Mo Farah, having already raced 25,000m in 10 days and with the biggest target on his back possible, stepped up to the line against a field where only one other athlete had competed in the 10,000m (his training partner Galen Rupp) and proved that he is truly one of the greats of distance running. Certainly the other runners, cowed perhaps by Mo’s reputation, played into his hands. But I doubt it would have mattered whatever tactics they employed. Farah was unstoppable.

So Mo, if you are reading this, thank you. Thank you from the bottom of my heart for giving me the opportunity to tell my Grandchildren that I met you at least twice in person and I saw you race in the flesh, at the greatest Games ever staged. And I saw you bring all the work, dedication and belief that has been so hard earned and deliver a performance over 12 and a half laps that will live very long in the memory. You are, quite simply, phenomenal.