I have a theory that if you want to run a fast time in a race, then you really should find a race with as many other fast runners as possible. I am just reading the new book by Malcolm Gladwell, called David and Goliath and in that he talks about the idea that very often the things that we think might have a linear relationship – such as diminishing class size and pupil success – actually don’t. In fact in the case of class sizes, there is a point where the smaller the class, the worse the pupils do. I will leave you to read the book and understand why.

But I think that the same goes for races, especially the closer you get to the front. The more runners there are (up to a point) the better the chances you have of running fast.

It is, perhaps then, no coincidence that I have never won a race. If you want to win a race then your aim should be to find a race with as few fast runners in it as possible. I admit that rarely does a weekend go by during the spring or autumn race seasons when I don’t see the results from a race and think ‘I wish I had done that race – I’d have had half a chance of a podium spot or even of winning it’. However, I am really only interested in racing my PBs and trying to achieve better times, so it matters not to me if I am second or 100th, provided I achieve what I set out to achieve – particularly if that is a PB.

The reasons I believe more = better

I think there are two reasons that having more runners around you is better if you are trying to achieve a particular time goal (and once again, there is not a linear relationship here: I have seen the runners filling the road at around four and a half hour pace in the London marathon and I accept that if you are in the race at that pace, there are too many people and you are actually hindered from running faster).

The first is physical. There is not doubt that a strong wind is not our friend when it comes to running fast times. The first year I ran the Cambridge half marathon I worked hard after a couple of miles to close the gap to a group of four runners in front of me. Once I was there, the group worked really well together, taking turns on the front. In that group was the first lady – Holly Rush – who was given very loud and strict instructions to stay in that group and shelter from the head wind as much as possible by her coach, Martin Rush, who was on the pavement at a number of points as we passed by.

I have experienced exactly the same in many races myself – the London marathon this year was made much tougher by the fact that as I hit mile 22 there was no one around me and there was a distinct breeze into my face along the Embankment. A better chance came in the Bristol half this year, when after about 7 miles I ended up in a group with two other runners and we worked together into the head wind along the Portway back into town. Without that shelter, I would definitely have not managed 78 minutes two weeks after a 100km mountain race and the weekend after 80 minutes at the Run To The Beat.

I also think that there is a huge psychological advantage to running in a group. If everyone in the group get it right, each person can allow the group to pull them along for a while, relaxing and simply following the feet, letting someone else take responsibility for the pacing and sharing the responsibility.

This sort of pacing benefit was brought home to me at the Wokingham half marathon last year. In that race there was a veritable peloton of runners, all clicking off the miles at sub-75 minute pace. Working together, sharing the pacing and sheltering each other from the wind. It was a perfect example of a group working together and the results show the effect that grouping had with the following times posted:

Which race to pick

So I hope I have established that there are two very good reasons to try to find a race – at least a half marathon – where you can run with a group all targeting the same pace as you, if you want to push yourself and potentially run a fast time.

The next question is which race should you try to get in to? Well, if we look at the races where people run under 75 minutes – the time for a guaranteed Championship Entry in the London Marathon – then the pattern is stark. There were 21 races in the UK this year where more than six people have run under 75 minutes. Amongst those however, there are a super-group of three where more than 47 have achieved that target and six more where at least 10 have completed the course at an average of 5 minutes 43 seconds per mile. This chart shows you the races where people ran under 75 minutes (click on the chart to be able to read all the race names along the bottom): 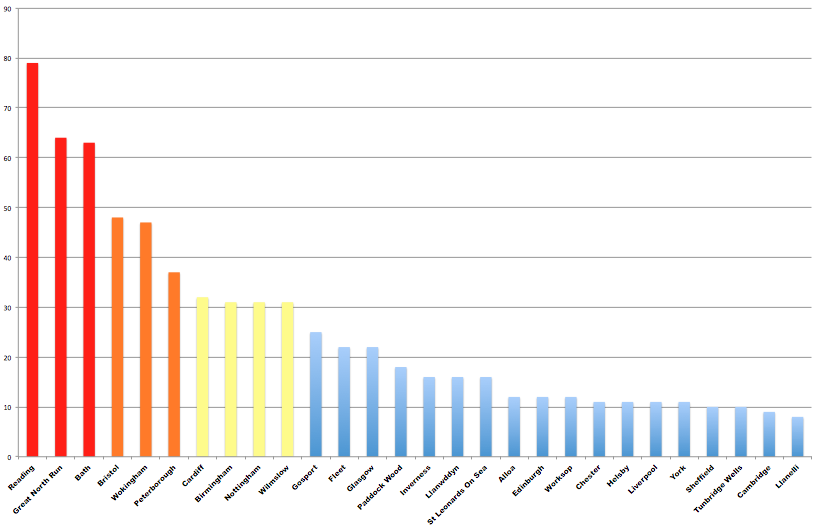 I realise of course that there are factors that come into play here. Some of the races are big events and by the very fact that they have tens or thousands of runners, there is a good chance that there will be fast runners. But that is not always the case: in the Royal Parks half marathon last year – on a flat course, in good conditions – there were exactly 5 runners under 75 minutes – that is 0.042% of the 11,764 finishers. Compare that to Wokingham 2013 where 1.74% of the field finished under 75 minutes and Reading where 0.62% achieved the same time. Admittedly these are not big numbers, but in the case of Reading that was 80 runners out of a field almost exactly the same size as the Royal Parks.

It should also be noted that I have not taken into account any weather conditions or course profile.

But I think that the reality is that if you are looking to run a fast half marathon, you will have a much, much better chance if you run one of the three races where there are the most other runners trying to do the same. For runners further down the field, there doesn’t seem to be any benefit from running in the bigger races, indeed the opposite is probably true, but once you are looking to run 1 hour 30 minutes or faster, the Bath, Reading and Great North Run races are simply the best.

Here are the races that are in the chart above: