In this post, Peigh, a man of many talents and great wit, who I know through the RunDemCrew, talks about his battles with the pavement and how this years Royal Parks Foundation Half Marathon would be an opportunity for redemption. He was ready to exact his revenge on the 13.1 miles of London streets if only he could get a place…

In January of last year, good friend and fellow RunDemCrew member Alex Stableforth proudly announced she’d be running a half marathon every month, foolishly I decided to join her on her quest.

All was going well until October’s run.

As Alex had doubled up on the previous month, I was playing catch up and found myself alone in the starting pen on 2012’s Royal Parks Foundation Half Marathon. Its safe to say I wasn’t feeling too confident as I had picked up a little niggle in a previous run and was actually warned by physio Barbara Brunner to take it easy, back in June. Being the stubborn carefree Gemini that I am I quickly found myself at the 1st mile marker. My right knee started to give me grief, and Barbara’s words repeatedly echoed in my head.

I’ve started so I may as well finish

I said it to myself, and finish I did. Admittedly it was extremely idiotic to disregard the advice of a professional however, my ego wouldn’t let it rest.

I’ve done 10 half marathon to date and that was my slowest ever time coming in at 2:10: the ego I tried ever so hard to protect was now shattered into a million a little pieces.

My knee had ballooned up to the size of a Mitre ball, and I could no longer run.

I was now in a dark place, broken my commitment and could no longer support Alex on her remaining 2 half’s.

Running was my vice, my escapism, my physiologist, what on earth would I do now? I started to feel sorry for myself gained loads of weight and became very close friends with my mother’s couch. 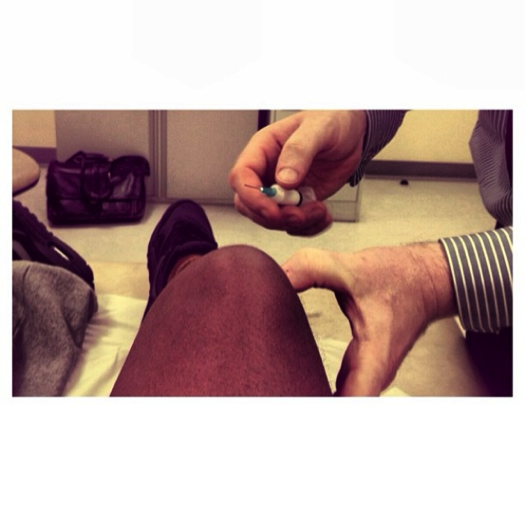 Fast forward to the New Year, and like most of us I decided to make a change. Immediate point of call was the doctor, he took one look and recommended I have an injection, to which I of course agreed. Knee injected it was now time to partake in some regular physio session. Four weeks down the line, and 6 physio session later I felt confident to train again. Knee obviously still feeling fragile I wasn’t going to run just yet. As suggested by the physio I picked up swimming and began to swim every single day.

Side note: Massive thanks to @MrFatChance & @NyxDeyn who actually taught me how to swim properly.

The swimming wasn’t enough, I needed the buzz the rush of endorphins running gave me, I needed more. I took up boxing at Double Jab ABC. This is was it, this was what I was missing, the void was now well and truly filled. I gingerly skipped in the mirror praying my knee would hold out. I found myself taking care of the food I ate, the weight dropping off and my confidence growing.

So much so I signed up to do a Triathlon in May. I feared the run at the end, as I hadn’t run since Royal Parks last year. Fortunate enough for me it was only a super sprint thus meaning the run was just 5k. Upon completion I thought;

Well I’ve just run 5k and it hurt, what if that’s now my limit what if I can’t run anymore than 5k?

Mr Confident was now Mr Not So Sure.

Fast Forward to July and Jim, my coach at Double Jab, announced the whole club would be running a 10k in memory of his deceased nephew.

What running, a race, more than 5k? Me never

Alas I knew I had to train, as I didn’t want to hurt again. Come race day I absolute flew around the course and got a new PB. Mr Confident was back. So confident he had signed up to his first half since Royal Parks. September I find myself in the start pen of yet another Half Marathon, paced by @MrFatChance I come in with a new PB of 1:41:52

By this point my confidence is super high, and I’m ready to take on the world. Royal Parks 2013 is in my sights and I’m ready to revenge last years mishap. I put word out that I’m after a place and I mean business.

Two weeks pass and I hear nothing, my chance to revenge the race that left me emotionally scared was rapidly slipping through my fingers. Monday morning I receive a DM from Algy Batten asking me if I still wanted to run Royal Parks, I immediately reply with;

Hell Ya, that race and I have BEEF

We go back and forth and delegate how we can make this happen. 10 minutes later I receive a DM from the running god that is Simon Freeman [Oh come on now, that is a bit extreme – ed.] He drops his number and of course like an excited little schoolgirl I ring ASAP [He did ring really fast – ed.]

We catch up for a little then get straight to business: Royal Parks. He explains how it was all going to work and forwards me on to a lovely lady named Emma. Emma then sends me an email with a form to complete, I immediately print it off scan it and send it back to her. Buzzing like a kid on Christmas Eve my wish was granted, I was running Royal Parks.

Saturday morning I jump on my Vespa and head straight to Hyde Park to pick up my race number, this is happening, this is real. After picking up my race number I advance to my mothers to of course carb load (my fave bit). One more sleep and I’d be in the starting pen ready to show Royal Parks whose boss.

Back on the Vespa I again head for Hyde Park. Greeted by the lovely team at the Media Tent from where I’m ushered to the VIP tent, which of course had nice loo’s, beautiful breakfast and a masseuse for the post race pain. Of course none of this mattered to me, I was in the zone: I was after a sub 1:40 and no fancy sandwich was going to deter me from this goal. The main advantage of being a media runner was the VIP tent being situated right at the start of the race, which meant we got to set of first. This I was happy about as I avoided that horrid rush of human traffic often experienced at the start of the race.

SOUND OF THE KLAXON

Press play on my phone, start on the watch and begin to pound the pavement. I had a plan in my head but as soon as I started running it went out the window, the ego was back, this was personal I really wanted to prove a point.

Got to Westminster and saw the 4 mile marker

Wow 4 miles I’m flying I thought to myself

Only to notice it was in fact on the other side of the road and we had to double back, I was only mile 3 in. Albeit it only at mile 3 I was still a minute or so ahead of the 1:40 marker this of course made me happy.

After mile 6 I found my self beginning to wish the next mile would hurry up and I wanted the race to be over already, having not stuck to the game plan and going out too fast I was now beginning to feel it.

By mile 9 I was well and truly hurting, I start popping my energy beans like there was no tomorrow, in hope they would immediately fix me and I would fly through the rest of the course.

At Mile 10 I saw members of the #cheerdemcrew and needless to say they lifted my sprits and gave me the extra boost I was in search of. Now I haven’t checked my splits but I can guarantee after seeing them I sped up.

At Mile 11 I looked up and saw the 1:40 marker about a minute ahead of me, I began to panic

The remainder of the race was playing catch up, I had to catch that marker I couldn’t come in with a slower time than my previous half, I just couldn’t. The emotional rollercoaster of the last 2 miles is one I never want to ride again.

As we approached the finished I looked up at the clock and saw 1:42:01, I was broken I came in slower than my previous half. Greeted at the finish line by fellow Run Dem member @lukeandco he proclaimed;

You was flying bro, you smashed it, I try wave but you was in the zone

Little did he know I was trying to play catch up and I was in agony.

I was embarrassed, upset and started to question myself.

Why didn’t I stick to the game plan?

Who did I think I was?

Why did I go out Friday night?

Why did I go to watch the boxing at the O2 last night?

Once I’d picked up my medal Luke continued to assure me that I’d done good and shouldn’t worry, I wasn’t hearing non of it.

A text came through and broke our conversation

CONGRATULATIONS!
You completed the Royal Parks Foundation Half Marathon in 01:40:05

I dropped to the floor and began to whine like they big baby that I am.

What man? Its still a new PB that’s sick

I still wasn’t satisfied that 5 seconds will haunt me for the rest of the year.

When I finally got back to my flat had a cup and tea – earl grey rooibos! It dawned on me that I actually did an OK job. I had shaved a whole 30 minutes of last year’s time so I guess that counted for something. A lesson was definitely learnt.

I just want to end this post by saying well done to everyone who took park, a massive thanks to #CheerDemCrew

Emma at the Royal Parks Foundation

And of course Mr Simon Freeman

The ghost of Royal Parks is well and truly slayed!