In this guest post Jamie Rutherford, friend of the blog and top level runner, writes about his recent run at the Perkins Great Eastern Run half marathon and how that relates to the blog I wrote recently about picking your half marathons carefully, if you want to focus on performance. Take it away, Jamie…

This run (in its current format) has been taking place since 2006 and every year attracts legions of runners looking to take advantage of the flat and speedy route around Peterborough, as well as those who are running the distance for this first time. The one lap course starts and finishes at The Embankment alongside the River Nene and boasts a total elevation gain of only 16 metres. With plenty of good local support along the route, it is easy to see why this event is so popular, a fact testified by the 5,200 entrants this year.

I first took part in the race in 2011 and was pleasantly surprised to find just how flat and suited to a fast pace the course really was. As a runner coming from Sheffield, flat is not gradient that I am used to, so Peterborough made a welcome change! This year, I returned to Peterborough with the aim of running under 75 minutes, a target of mine for the last 2 years and one which I hoped could be achieved on this course. Having experienced its benefits previously, I felt that this would be the course for me.

Race day itself fell at the end of a very wet week and Sunday morning was no exception.  As the ‘off’ loomed, heavy rain was accompanied by strong winds and I’m sure many participants were cursing the MET Office’s unusual accuracy. Any non runner would surely have cast a worried look at the hordes of lycra clad people wandering about in black bin bags but in conditions like this, runners seem to care more about function rather than fashion!

As the Kenyan favourites sped off, the rain kept falling and the assembled masses surged forwards amongst the continuous bleep of thousands of stopwatches.

The race took a winding route through Peterborough’s centre and then out into the surrounding local suburbs. Despite the conditions, local support was as strong as ever and increased towards the second half of the course as the rain started to clear up. Compared to a race like the Great North Run, there are a large amount of hard left and right turns to be taken around Peterborough but then who wants to run along a boring dual carriageway for the whole route anyhow?! The course has stayed the same since 2012 and was amended from 2011 for increased speed. At the time it felt as if this was not the case but the end results definitely contradict this! 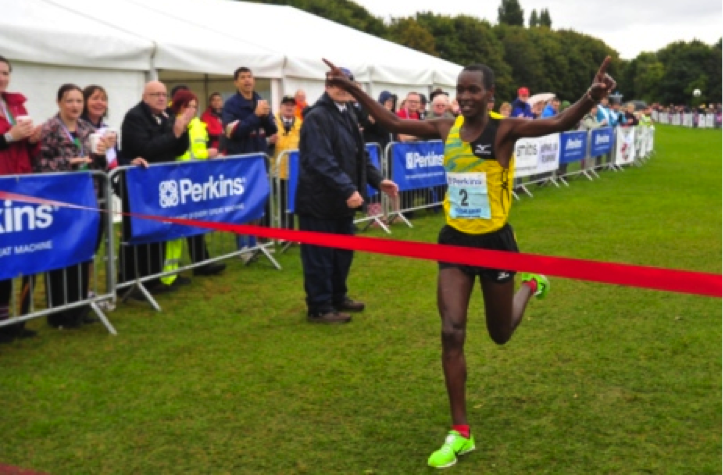 As for my run, I set off with thoughts from one of Simon’s recent articles about running fast times in my head. I knew that this race had a high percentage of runners coming home in under 75 minutes (38 in 2012) and thus my best chance would be to put myself in the company of some of these faster runners and hope that the physical and psychological effects of running in a group could help me achieve my target. To recap on Simon’s thoughts, the two biggest benefits of running in a group are:

I managed to find a group of runners all going for sub 75 minute time (5.43/mile pace) fairly quickly and we bunched up together. For me this was a definite benefit, as running solo in the miserable conditions which we experienced during the race would have been much harder on my own.

We all seemed to be working well together and took it in turns to lead. I’m more used to burning off too fast at the start of races and then struggling solo for the remainder so this was an unusual experience but one which helped me to maintain the target pace.

As halfway loomed, myself and two other runners pulled ahead from this pack and spent the next few miles trading the lead and words of encouragement as the finish came closer.  Despite feeling fatigued, my legs and enthusiasm stayed strong and the pace for the second half picked up. I am sure I can thank a recent good block of training for my body not calling time on this race but I owe many thanks to these other runners for helping me to keep going. I am not sure if I could have kept my pace up had I been on my own and would certainly have suffered in the cold and wet.

I am pleased to say that by keeping a level head and with the added bonus of a strong racing field, I and the others around me all came in under the desired 75 minute barrier! My personal splits were between 5.32 and 5.52 with an average of 5.39/mile and an overall race time of 1:14:47.

In conclusion, the Perkins Great Eastern Run is a cracking race. It offers a flat and varied course which is suitable for those chasing a PB or those who want a fun and friendly race to test their mettle. The course is one of the fastest in the UK and is highly recommended for those who are chasing a fast PB, with a high proportion of runners finishing with a time which will qualify them for London Marathon Championship entry. In total, this 2013 race yielded 37 runners running faster than 75 minutes. Of these, 13 ran PBs and 2 ran SBs. Not bad for a wet Sunday morning run…