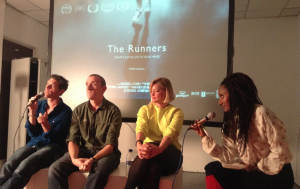 The film is short, only 10 minutes, and was made by two chaps: Matan Rochlitz and Ivo Gormley and it is essentially a documentary about them asking people amazingly challenging and wide-ranging  questions while they run around Victoria Park in east London. For example: “Are you in love?”

Can you imagine, going for a run around Vicky Park and having two chaps, one on a bike towing the other around in a little cart on the back, while the one in the cart asked you deep and difficult questions about life?

Well as preposterous as that sounds, it really works. The film opens with a couple of rather less successful attempts to extract something deep and meaningful from east London’s pavement-pounders but soon moves on to people who are clearly happy to let whatever is going on in their minds spill out of their mouths and straight into the film-makers camera.

I won’t spoil the film, not least because it is only 10 minutes long and it is now available to everyone, so make a cuppa and take a break to watch this:

And it is also available on the Good Gym website, which neatly brings me on to that organisation.

The Good Gym was set up by one half of The Runners’ team, Ivo in 2009 and the idea is that people meet, run to a location together, do some work for free and then run back to where they started. A good example as the message my friend Richard – who got us the tickets for last night’s screening – received on his phone: the run was 45 minutes to an overgrown garden, pruning, chopping and pulling-up to make the garden usable for an elderly resident and then a 45 minute run back. You can see more details here.

After the film there was a panel discussion / Q&A with three rather interesting people: Alexandra Heminsley (journalist and author of Running like a Girl), Martin Yelling (coach and presenter of Marathon Talk) and Greg Laybourn who is one of the runners who appears in the film.

The questions for the panel were really about what they think about when they are running and the physical and psychological benefits of being a runner. There was one particularly interesting comment from Alexandra, however, that I made a note of. She said:

I think that if you are a runner and you constantly set yourself targets, then that is self-hatey

And I think that is probably the reason that the Good Gym didn’t appeal to me when I first heard about it. Unlike my wife, who will interrupt her runs to pick up litter, help people out, look at something interesting, smell the flowers, etc, my runs always have purpose because I always have a target in mind: at the very least one for the run I am doing and one longer term goal like my next race. Primary amongst my targets for any run is not stopping unless absolutely necessary, so the Good Gym idea has not really appealed to me.

The discussion last night and learning more about the Good Gym has started to convinced me that some of my runs could start to be less about running and more about doing good. If you received my newsletter thingy this week, you will know that I have got the London in my sights for next year (5 months and 4 days from today!) and so my running will only become more purposeful over the next 20 weeks or so, but perhaps there is a chance every so often to take the foot off the accelerator and allow a run to be about something other than just training.

But mainly in response to Alexandra’s comment, I disagree: I think that setting targets is the opposite of self-hate. I think it is about wanting to become the best you can be, rather than settling for less: which in my book is much more closely about self-respect (possibly bordering on narcissism and selfishness in some cases).

But I do like the idea that by adding a purpose to going for a run, more people will do it. If that works for you, then get involved and please let me know what you think.

Back to the film

So a final thought about the film. One of the things that Ivo and Matan said after the film which I really liked, was the idea that people are off-guard when they are running. Provided they are not doing a session and can talk, the film makers found that the very act of running provided some sort of distraction for the brain and meant that the questions they were asking – very deep and personal questions – bypassed the usual filter that might have most of us changing the subject and diving in to small talk. Or maybe us runners are all really deep thinkers all the time and always happy to share our inner-most philosophies with a stranger in a cart being towed around Victoria Park behind a bike. Maybe.