Hydration is a key component of every marathon runner’s armoury when it comes to succeeding over 26.2 miles (or even further). I tend to think that for anything up to and including a half marathon, you can get away with being a bit haphazard during the race, provided you are well hydrated before you start (and that doesn’t mean gulping down a pint of water 5 minutes before the gun, that simply sloshes around in your stomach and can’t be absorbed). But for a marathon, especially if you are going to be out for 4 or 5 hours, you need to “Think Drink” (I just made that up, so any hydration brands out there who’d like to use it, you know how to contact me!)

I found out about that to my cost in the London marathon 2011. I was almost certainly a bit dehydrated before I started and it turned out to be a warm day – not stiflingly hot, but as I set off at the 6 min/mile pace that was required for me to hit my target time, I was quickly sweating and losing fluids rapidly.

By 18 miles I was in big trouble – my mouth felt like it was full of cotton wool and I was having trouble swallowing because my throat was so dry. I remember wiping my forehead and it was completely dry – just salt-crusted, but there was no sweat at all. At the big turn in Canary Wharf I came to an aid station and stopped.

The response from the crowd at seeing someone go from close to 10mph to nothing was really hard for me to deal with – everyone was yelling at me to get going again. But I was feeling worse than I had ever felt before. As I walked through the aid station, I took two bottles of water and drank them both completely. Then I took a bottle of Lucozade sport and drank all of that as well – so probably 750ml of liquid in 3 minutes.

At the end of the aid station I started jogging again. Within half a mile I was running. Seven or eight minutes after I stopped running, I was back to nearly 6 minute miles again. I had blown my target time, but I was able to regroup, recalculate and aim for a new target of sub-2:45. I finished in 02:43:37.

I also learned that in future I would have to figure out how to deal with staying hydrated. And you know, there are products for that…

I recently had the chance to talk to James Mayo, Co Founder of SOS Hydration about why hydration products are better than water and what runners should think about when it comes to avoiding dehydration. 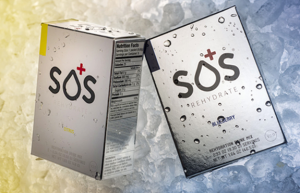 Me: James, first of all, what was the inspiration behind SOS Hydration?

James: It was a simple lightening moment. Both my brother and I ran at a high level and whilst we had access to hydration products, the simply weren’t working so in a Heath Robinson fashion we would make up something that worked for us. My wife is a doctor and she knows about the side of rehydration techniques used in medicine. Between us we realised that no one had cracked the hydration question. So SOS is based on the World Health Organisation hydration guidelines. The truth is that everyone gets dehydrated – when I was in the Army – at same time as I was a runner – in Cheshire Regiment – where there were also problems with dehydration, so I have seen it from all angles and that inspired me to set up the business.

Me: There seem to be hundreds of hydration products on the market – how is SOS different to, or better than, other products?

James: There are a number of difference, but I believe that the main one are:

Me: What are the key reasons marathon runners should focus on their hydration?

James: The answer to this revolves around the fact that a 2% loss in body weight through dehydration can lead to a 20% loss in performance. So shoes and gels are enormously important factors in performing to your best, but hydration is the last bastion of performance that runners need to get right

Me: How should runners use the product? How about in a race?

James: We recently supplied the sailors aboard Oracle Team USA with SOS and they were going through 1500 packets a month between 28 sailors. The low osmolarity means less gastrointestinal distress and we recommend athletes use 1 packet for each hour of exercise, so runners could drink one before the marathon and a couple during the marathon and one after. SOS comes in silver foil packet so you could rip it open, pour into water bottle handed out on the course and drink it as you run. It can also be pre-mixed if you can get access to bottles during your race.

As I said in one of my questions to James, there are seemingly hundreds of hydration products on the market and it is essential that if you decide you use one in a race, you figure out what is right for you by practicing with it well in advance.

For me, I have to say that I like the idea of using something that has electrolytes for ultra races seems like a great idea. For the marathon, the problem is that I can’t have pre-mixed drinks by the side of the course (not fast enough for that) and I feel as though I am running too fast to be able to open a packet of powder, get it into the neck of a bottle and then drink it – at 6 min/mile it is a matter of grabbing a bottle and taking a couple of gulps whilst trying to breathe!

But it is definitely worth thinking about your strategy and practicing what you are going to do on race days. If you want to try SOS it is available from Sweatshop* – let me know if you try it and what you think.

*disclaimer: at freestak, the company I co-own, we do work with Sweatshop on social media marketing campaigns but not as yet on SOS and we don’t work for SOS.

Last night I had the pleasure of attending a talk given by my coach Nick Anderson, to a…

Drink I don’t think it is possible to race a

Last night I had the pleasure of attending a talk