I am unashamedly a fan of the adidas Boost midsole material technology. In case you are not up to speed on what it is all about, my understanding is that adidas have developed a midsole material (the springy bit that provides the cushioning in running (and indeed most other sports) shoes) that replaces the EVA that is usually used with something made up of millions of little balls of material fused together – this is Boost. From my point of view, I think that the Boost material has a couple of advantages: 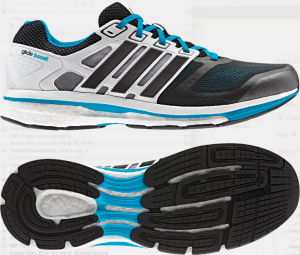 The latest shoe to receive the Boost treatment is the Supernova Glide. This is a new shoe for me. I have run in the adidas Bostons before and I love the adiZero Adios. But when I was looking for a reliable, everyday training shoe – which is what I consider the Supernova Glide to be – I always opted for the Mizuno Wave Rider. But my head has been turned by this new adidas shoe.

The team at adidas invited a few of us to the Highbury Fields Parkrun (in case you didn’t know, adidas are a supporter of Parkrun, the free weekly 5km runs that have sprung up all over the UK and further afield) to find out about the Supernova Glide Boost. Sadly the courier that was supposed to deliver a pair the day before the Parkrun didn’t, so the first I saw of the shoes was as I arrived 20 minutes before the run. Being tender-of-foot I had to decline the opportunity of trying the shoes that morning, sticking instead to my trusted adiZero Adios. But the shoes immediately impressed me straight out of the box. 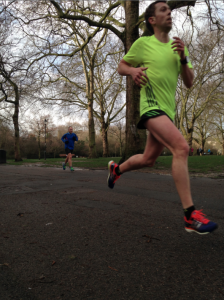 There has been some controversy recently with the editor of Athletics Weekly and the people who manage Parkrun disagreeing on whether the events are ‘runs’ or ‘races’. I think that the distinction comes down to how much Parkrun wants to help UK Athletics hit its participation targets set up Sport England (or something like that – I can’t really figure out who is who and what is what when it comes to all the politics) and so they call their events a ‘run’ to avoid elitism and get as many people involved as possible.

However as far as I can concerned, there is a start line and finish line, the course is accurately measured, the organisers time how long it takes you to get around the 5kms and there are other people trying to get around said course faster than me. That is a race.

However training has been patchy recently and I have never been very useful over relatively shorter distances, so I had lowly ambitions for this race. My plan was to set off and stay as close to the leaders for as long as possible. The anonymity of Parkruns means that it is often difficult to tell who is who and whether someone is going to hammer out a 15 minute 5K. We will see, I thought!

The starter got us under way and immediately there was a group in front – probably 5 or 6 runners ahead of me. The first 200m were uphill and I tried to stay steady and make my way around the first of five laps as close to them as possible. By the end of the first lap, I was second.

The chap in front looked determined. I could tell that from the back of his head. He wanted this win and all I could hope was that I could make it as difficult as possible for him. So I closed up behind him on the hill at the start of lap two and by the top, as we headed into the wind on the downhill side of the park, we were working together to try to get around as fast as possible.

By the end of the third lap I was in trouble. My heart was in my mouth and I had a horrible raw feeling in my lungs, as though I was sucking in really cold, harsh wet air. Which I was. I hung on grimly and even managed to take the lead for the penultimate uphill section at around 4km.

Then ‘Determined Man’ put in a surge. We turned at the top of the park to start the last downhill into the wind and he pushed on. The string between us snapped. I was finished. Then I noticed a runner on my shoulder. It was Harry Benyon, one of the team from adidas’ PR agency who were there organising us bloggers. Now I know Harry is young, fit and enthusiastic, but when I grunted “Go Harry, GO!” he took off like he’d just started the race (sorry, run!) in pursuit of Determined Man.

For me, the world closed in. My great friend and the coach on the day Tom Craggs had jumped in with 1000m to go and was pacing me, 5 meters ahead. All I could do was stare at the back of his head and hang on. For the last two laps we had been running through back markers and now, as we hit the uphill for the last time, it was rather crowded. I couldn’t see D.M. or Harry. I didn’t care.

I crossed the line in third in 17:20. Not bad seeing as I am out of shape and it was a difficult course on a very windy day. D.M. won dipping under 17 minutes for a PB. Harry barely looked out of breath (bastard!)

What about the shoes?

So unfortunately I didn’t get to try the shoes in the race. Maybe if I had been in them I’d have stayed with D.M. and Harry. Maybe not. But since that cold, wet, windy Saturday, I have been running in the adidas Supernova Glide Boosts quite a bit. I’ve brought them on holiday with me and have been running in them between bouts of eating and relaxing (the balance of running to eating/relaxing has not been ideal, but I feel great!)

My impression is that the Supernova Glide is a great training shoe. Like all of the Boost range that I have tried, the shoe is light, but in this shoe there is a really good amount of cushioning. I will happily pull this shoe on for my mid-week steady runs. The upper is really well ventilated: a mesh with some welded overlays which forms

a nicely generous toe-box. The heel is well cushioned. And the outsole has Continental™ Rubber which means there is no slipping and sliding in the wet (it has actually rained out here in the last couple of days!)

All in all, I think the adidas Supernova Glide Boost is a great all-round running shoes. It is slap-bang in the middle of the price range for similar shoes at £100 and I think that given the responsiveness and the long-lasting cushioning that the Boost delivers, this is a good choice if you are looking for a reliable, everyday training shoe and possibly a comfortable option for longer races.

Now you must excuse me, I have some essential eating and relaxing to do.