I was recently sent a pair of Nike’s latest Flyknit creation for runners – the Nike Flyknit Lunar2. This is the first Nike shoe that I have had the chance to try out for quite a while and I was excited to see if this would be the Nike shoe for me.

The thing is, I like many things about Nike. I like the company’s philosophy. I like the history of the brand. The athletes that they support are usually heroes of mine (well the runners at least – the cheating cyclist and philandering golfer not so much). And I like the design of so much of the Nike gear. 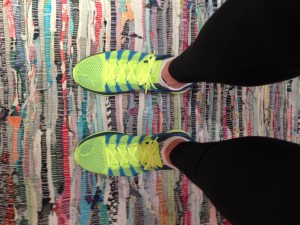 But since my first ever pair of running shoes – a pair of Nike Pegasus that I had to take back after they started squeaking as I ran (annoying in the extreme!) – I have not found a pair that I really liked running in. The Nike Frees have all been a bit too unstructured. The Marathoners were almost a bit too hard. The Flyknit Racer was almost too light and the midsole felt a bit too narrow for my trotters.

But what about the Flyknit Lunar2? How would they work out?

Well straight out of the box and on to my feet, they felt great. If you haven’t experienced the Flyknit upper, you should. It simply confirms to every contour of your feet, fitting like a glove (I know that is an overused analogy, but in this case it is actually true!) and not leaving any voids that can crease and rub.

The Lunarlon midsole is now nothing new – it has been in Nike shoes for a while – but it still feels remarkable when one hasn’t run in Nike shoes for a while… which I hadn’t. It is a beguiling mixture of cushioned plushness and firm lightness, especially in this shoe. And for a runner like me, that has developed a mid-foot landing, it provides just the right amount of cushioning to deal with concrete pavements on longer runs. Which brings me on to the real review…

After wearing the Flyknit Lunar2s for a few steady pre-breakfast runs, all around an hour or so, I decided that I would see how the shoes felt on a proper run. I had 2 hours with the last 30 minutes at marathon pace in my training plan. That would end up being a touch over 20 miles and I wore the Lunar2s to see what they would be like in a simulated race situation.

The short version of the review – which is all I’m going to give bother you with – is that they were great. One slight criticism is that I did get a little bit of rubbing on my achilles tendon from the shoe’s collar. But if I am trying to hold on to 6 min/mile pace for half an hour after 90 minutes steady running, the odd rub is to be expected. 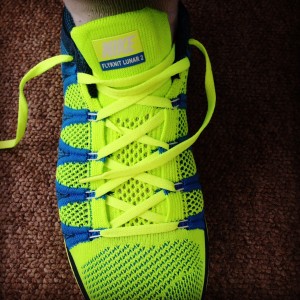 The shoes felt light, cushioned and stable and I would say that they would probably make a rather decent marathon shoe if you are looking for something that will give your feet a good amount of protection from the constant pounding and don’t weigh too much. Having completely woven uppers also means that no matter how far you run and no matter what the temperatures, my feet have not overheated in these shoes.

So there you go – the Nike Flyknit Lunar2. I reckon this is a rather good shoe from Nike. It is still not the racing shoe that I am looking for, to wear in half-marathons and marathons. But for me, this is a great choice for many of my runs from an easy 45 minute recovery run to a proper marathon preparation long run.