Running is such a simple sport. The common wisdom is that all you need is a pair of shoes and enough functional clothing for the weather / legal requirements of the place you are running in. Some even argue that you don’t need shoes. Or clothes.

But that is also, perhaps, one of the downsides of running. I don’t think there is much that science can do to help runners go faster. Certainly the footwear and apparel brands are doing their best with shoes that give more return or weigh less and clothes that are designed to wick sweat and support muscles. And nutrition brands undoubtedly create products that are scientifically superior to the beer and butties that our running forefathers trained and raced on. And of course there are GPS devices and heart rate monitors that mean that training can be more and more specific and controlled. And yet…

Despite all the technological advances, runners in the UK and Europe are – on average and at every level – getting slower. Not only slower than the runners coming from the distance-running powerhouses in east Africa but also slower than the aforementioned beer-and-butty fuelled runners of the past.

Maybe in cycling it is different? Well Michael Hutchinson is certainly obsessed with finding out.

On 6 May, Michael will be at the Bloomsbury Institute to talk about his new book; 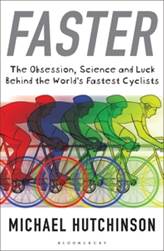 Faster: The Obsession, Science and Luck Behind the World’s Fastest Cyclists

Hutchinson will explain why cyclists do what they do, what the riders, their coaches and the experts get up to in preparation and why the idea of going faster is such an appealing, universal instinct for all of us.

This examination of what it takes to get faster on two wheels has garnered high praise already from none other than the man who has made cycling fast a national obsession: Sir Dave Brailsfor. He says of Faster,

Fantastic. An intelligent and personal insight in to the world of elite cycling

There should be no surprise that Michael has written a good book on the subject of cycling fast. Hutchinson is a former professional cyclist and won multiple national titles in both Britain and Ireland, represented both countries internationally and rode for Northern Ireland at the Commonwealth Games in 2002, 2006 and 2010. He also has writing-form having already penned an award-winning book, The Hour: Sporting Immortality the Hard Way.

So I would say that this is going to be a very interesting read. And if you can get to the talk, then I think it will be a fascinating discussion around the subjects in the book. I went to the Bloomsbury Institute for a talk by Scott Jurek about his book Eat and Run as well as a talk by Graeme Obree for his book A Training Manual For Cyclists (I still need to post my review of that book… sorry!) – both were utterly brilliant! If you want to go to this latest talk click here and book a ticket (in case you need to copy and paste it: http://tinyurl.com/oqa9fgo) – it’ll be a very worthwhile £10 I assure you!