I once heard someone say that the Nike Free is the best selling running shoe ever and whether or not that is true, this year Nike are celebrating 10 years of their iconic, floppy, flexible friend-of-the-foot.

As part of the celebration, Nike brought Sean McDowell, Vice President and Creative Director for Nike Running, over from Oregon to London and hired a space that they turned into a very cool museum and technology lab rolled into one in honour of the Free… and I was invited to check it out.

All cool and no fool either

It is undoubtedly the case that when it comes to ‘cool’ Nike are the kings of the runnerverse. Other brands might be purely dedicated to running or more likely to be worn by the fleet-footed speed merchants. But Nike will be on the feet of the trendy types and the fashion conscious.

And Nike also has some serious pedigree when it comes to running. The event that I attended last week really hammered that point home. The first and most immediate thing made it clear that Nike is a serious running powerhouse was the way in which I and my fellow invitees were made to wait on the pavement outside the space for quarter of an hour after the time we were asked to arrive, by big burly security men with ear-pieces. Apparently the Nike team weren’t ready for us… so who was getting themselves ready? None other than Olympian and marathon world record holder Paula Radcliffe, who was joining us for a run. And she would be accompanied by future stars Jessica Judd and Charlie Grice.

The irony was that once we were inside, Paula, Jess and Charlie were all absolutely lovely and down-to-earth: not a hint of the prima donna amongst them!

The running pedigree of the brand with the swoosh was also really brought home when we heard from Sean McDowell and he went through a brief history of the brand, illustrated with picture of Phil Knight, co-founder of Nike, standing with his coach and business collaborator Bill Bowerman – the man who invented the rubber waffle sole that revolutionised running shoes.

Whilst Nike has fingers in so many sporting pies, there is no doubt that running is deeply ingrained in it’s DNA.

The Nike Free Experience that I was invited to, was being run by Charlie Dark from the RunDemCrew – a very important man in my life as well as being a brilliant public speaker and motivator. He was the perfect person to get everyone invited to the event relaxed and receptive and was also the perfect partner for Paula, who clearly finds Charlie’s antics quite amusing!

After a quick introduction, Charlie had all of us go through a warm-up so that we were ready to head out for a run in the new Nike Free 3.0 that we had been issued with. As Charlie exhorted us to grab a foot and lift it behind us to stretch out our quads, you can imagine my surprise when I felt someone’s hand on my shoulder steadying themselves and I turned to see it was Paula – one of my all time heroes!

After the introduction and warm-up, Charlie and his team had all of the invitees back out onto the pavement and off running. 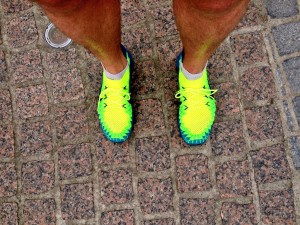 I must admit that I was feeling a little bit worried about running in the Nike Free 3.0 two days before the London marathon. They are – to put it mildly – minimalist. As we were to hear later, that is the point. I was worried that a shoe with a very minimalist sole and a zero heel-to-toe differential might give me some Achilles grief, especially as I had pushed myself in my last few sessions and was feeling typically sore in my calves already. But running with Paula Radcliffe was too good an opportunity to miss!

We ran for about 45 minutes and there were lots of stops due to traffic and waiting for the group to come back together so I was absolutely fine in the shoes and didn’t feel that I was stressing my foot or lower leg all that much. And in terms of how the shoe felt on, I think the Nike Free 3.0 is exactly what it sets out to be. As Nike say:

Our the most flexible and natural ride, the Nike Free 3.0 Flyknit Running Shoe features a lightweight, supportive Flyknit upper and an ultra-flexible, low-profile outsole…

Personally I don’t enjoy running on hard concrete in a shoe with so little cushioning and I must admit that I was pleased when I found myself running along next to Paula and we got on to the subject of what she wears and she pointed out that while everyone at the Nike Free Experience was wearing the new Flyknit Free 3.0, she was wearing a pair of Pegasus. She explained that with all the foot problems she has encountered, nothing would dissuade her from wearing the best shoes given her injury and the Free was not the best shoe in that situation.

The science and the application of the Nike Flyknit Free 3.0

Perhaps inadvertently, when Paula was talking to me – and by the way, what a privilege to spend 10 minutes one-on-one, running and chatting with such an amazing athlete – she predicted everything that we would hear later: that the Nike Free is a great addition to a runners collection of shoes, but it can’t be the only shoe you run in. When Paula is running on hard concrete pavements she does not wear the Free.

Having returned to the Nike Free Experience space, we were invited to listen to Sean McDowell from Nike talk about the development of the Free. And what was so refreshing was the open and rational way that Sean talked about the shoe; the fact that one of the shoes that Nike developed and which ended up as the Nike Free was in response to Mike Parker’s challenge to make a shoe that fits like a t-shirt for the foot; the fact that the Free was developed after meeting a running coach who had his athletes do bare-foot strides on the grass after track sessions; the way that a series of shoes – the 3.0, 4.0 and 5.0 – were developed to allow runners to choose the Free with the right amount of cushioning for them. It all made a lot of sense to me and there was very little of the bombastic “Just Do It” messaging that Nike can sometimes resort to.

My thoughts about the Nike Free 3.0

Personally, I think the Nike Flyknit Free 3.0 is a bit too minimal for the vast majority of running that I do. It was fine for 5km with lots of stops on Friday, but anything more than that and I think I would suffer from the lack of cushioning and the minimal heel-drop. I could adapt but frankly at my age and with as little time available to train as I have, I don’t want to put in the time required.

However I do think this shoe might come into its own when I was to want a pair of shoes to do strides in after a session or if I am looking for a really light shoe for track sessions.

The Flyknit upper is great – really light and highly breathable so these will also be a great shoe for the summer when feet can tend to get a bit sweaty, which can cause rubbing and blisters.

I would say that the shoe is a great addition to the shoes that you probably have at home and would be great for shorter stuff on forgiving surfaces where you want to give your feet a good work-out. For people who are dedicated to minimalist running, this might be an all-round shoe for miles and miles on the pavement, but that is most definitely not me.

And finally, to confirm what I have heard so many times before, Paula Radcliffe is really one of the most friendly, engaging, fascinating and easy to talk to people I have met. She is a great ambassador for the sport and for Nike and it was a real privilege to meet her – thanks Nike!