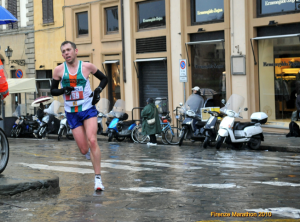 I was recently talking to someone involved in the organisation of the Paris marathon and she asked if I had run her race. I said I had and I explained that it was a bit of a breakthrough race for me. The first time I ran under 2:45. But actually if I think about the race that really was a breakthrough, for a number of reasons, it was Florence 2010. Why do I consider it to be a breakthrough? Here’s why:

Getting my race head on

The Florence marathon was in November, seven months after the sub-2:45 Paris race. I like the fact that instead of being satisfied with my Paris result, I redoubled my effort and tried again for a faster time. I think that I am inclined to be satisfied with a good result sometimes and yet when I went to Florence I wanted to improve on the time that had been a big target up to that point.

Getting the days before the race right

I was supposed to be sharing a room with a friend at the Florence race, but unfortunately he wasn’t able to come at the last minute and that left me on my own in a big hotel room. Usually I would have found the solitude rather disquieting and I would have ended up running around trying to keep myself busy. Instead I stuck to the plan of a couple of very short easy runs, planned where and I when I would eat dinner and then spent a lot of time on the bed in my hotel room watching TV. I really did as little as possible in the couple of days before the race and so by the time I was on the start line, I was really rested and ready to run. 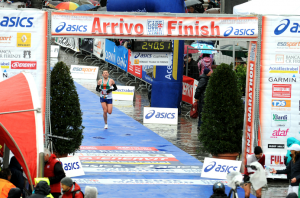 On the start line, two things didn’t go to plan. One, it was tipping it down with rain. I mean really pouring with rain. I was soaked an hour before the race started, with puddles in my shoes. The other thing is that I mistimed my toilet break and five minutes before the start I was in the middle of a crowd of runners desperate for a pee.

Rather than panic about these things though, I rationalised that the rain was good because it would keep me cool and I waited until the race started, ran 800m and found a bush in need of watering. Then I got on with the race. In the end neither the rain nor the 60 second stop 800m into the race made any difference at all.

Getting tough with myself

Marathons tend to hurt, especially if you are running them as hard as you can. The Paris marathon had certainly hurt. And the Florence race was tough. I wasn’t running to a time plan, instead I focussed on the person in front and I tried to catch them. Easy at the start, harder as the race went on. But I kept pushing. I didn’t allow myself to ease up and the result – 2:40:49. An improvement of over three minutes on my time from Paris.

So there you have it – I knew what I was getting in to in Florence and I really welcomed the effort that I knew it would entail. The result was great from a time point of view. But more than that I was happy that I had grown up a bit as a runner and started to get all the things right that would be essential if I was going to run the marathon any faster. Maybe I need to re-read this list and see if I can do it again… 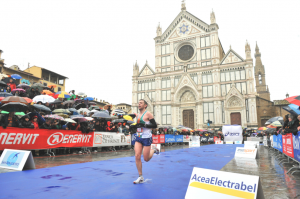