At the end of last year the team behind Like the Wind magazine along with some wonderful friends opened a Pop-Up for a week. We had film screenings, talks, workshops and hundreds and hundreds of runners coming in. It was actually a bit of an overwhelming experience and there were too many amazing experiences for there to be highlights – it was all one massive highlight.

In the middle of the week, on a rare quiet moment, a man walked in through the doors. I instantly recognised him as the author of one of the books that I love and that we were selling in the Pop-Up: Adharanand Finn. Author of Running With The Kenyans.

It was great to meet Adharanand and I was really excited when he told me that he was writing a new book. He had decided to travel with his family again to experience another hot-bed of distance running – Japan.

A week ago his latest book – The Way Of The Runner – dropped on my doormat and I immediately started looking for opportunities to dive into the pages.

The Way Of The Writer 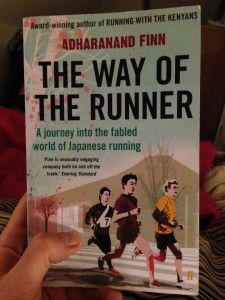 One of the fantastic things about Finn’s first book was the way that he threw himself into running with the Kenyans who were his neighbours in the village where he and his family lived for a year (hence the book’s title). This was not a dispassionate look at the way that east Africans train, live, eat and race. Adharanand was out there with them trying to understand why they are the best marathoners on earth whilst also trying to improve his own running.

And so it is with this latest book. Finn wants to get inside Japanese running and especially the Ekiden – wildly popular road relays that have millions hooked on the TV as they take place.

Whilst Finn’s brilliant way with words, self-deprecating humour, intensity about his running and journalistic rigour are as much in evidence in The Way Of The Runner as they are in Running With The Kenyans, it is clear that Adharanand wasn’t as welcome in Japan as he was in Kenya. Actually that doesn’t make the book any less interesting, but I was left feeling frustrated for Finn that he didn’t get as involved in the Japanese running scene as he seemed to be in Africa.

It isn’t just the access issue that allows Finn’s two books to be compared. Adharanand refers regularly to the differences between east African and Japanese runners. Sometimes favourably, sometimes not. There is clearly a question that gnaws at Adharanand, which is why, when looking at the Ekiden in particular, Japanese runners are clearly capable of taking on the Ethiopians and Kenyans at their own game, and yet they don’t? Runners who cover 20km legs in the Ekiden at a pace equivalent to a low-60 minute half marathon never graduate to the global marathon scene.

It also seems to me that Finn’s young family also had a harder time integrating themselves into Japanese society than they did in Kenya. They clearly have the ability to land in a very foreign land and really get on with people there, but again I got the feeling from reading the book, that they didn’t really settle and I wonder if that made it harder for Adharanand to spend as much time with the runners that he did meet as he would have wanted to?

Despite the fact that Adharanand appeared to have a harder time getting into the running scene in Japan than he did in Africa, the book is still utterly fascinating. I could spend much, much longer telling you about all of my favourite bits from this book, but I won’t. Because I really want you to buy it. In fact I want you to buy two and give one away. I believe that there is not enough good storytelling about running (there could probably never be enough for me!) so I want people like Adharanand Finn to keep doing what they do.

As you would expect from such an accomplished writer and journalist, the stories flow and it is a really lovely book to read. It is also satisfyingly long, not just a brief synopsis of the Ekiden phenomenon and a few personal observations. No, for as long as it takes you to read this book, you will be immersed in the scene. It has certainly made me want to go to Japan even more and take my running shoes. It is as though Adharanand is fast becoming my personal fantasy-travel agent. I wonder where will be next…

Tags: Adharanand FinnekidenfeaturedjapanKenyamarathonRunning with the Kenyans